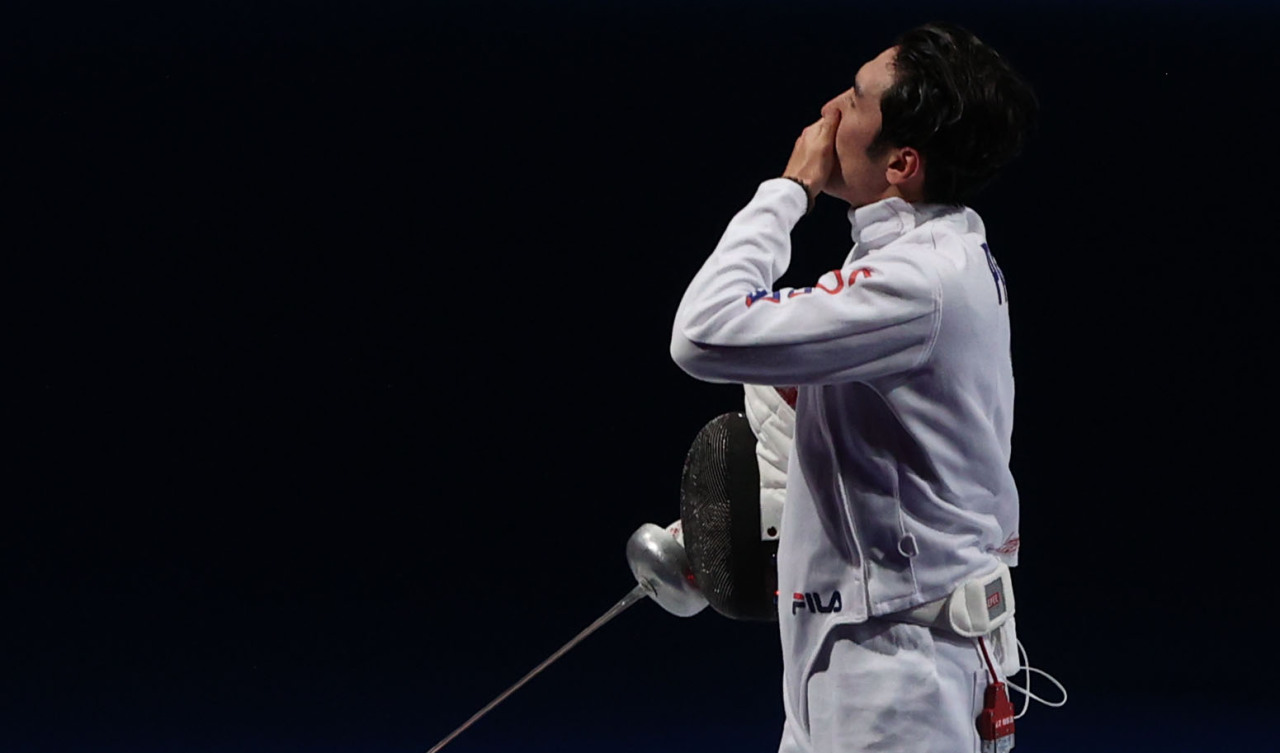 Park Sang-young of South Korea reacts to his loss to Gergely Siklosi of Hungary in the quarterfinals of the men's individual epee fencing event at the Tokyo Olympics at Makuhari Messe Hall B in Chiba, Japan, on Sunday. (Yonhap)
CHIBA -- South Korean fencer Park Sang-young came out of nowhere to snatch gold in the men's epee event at the 2016 Olympics, capturing the imagination of his country.

The affable athlete with an easy smile and a dogged determination -- Park rallied from a 14-10 deficit against Geza Imre of Hungary and won 15-14 -- became an instant star of the Rio de Janeiro Games for South Korea.

But along with newfound fame came the weight of expectations, something Park now admits became unbearable at times. Injuries and slumps followed, and Park came into the Tokyo Olympics this month with little fanfare -- certainly not enough for a defending Olympic champion.

As if ready to write the same script this time, Park won his first two matches of the individual event Sunday at Makuhari Messe Hall B in Chiba, east of Tokyo. But then he ran into world No. 1 Gergely Siklosi of Hungary in the quarterfinals and lost 15-12.

"Siklosi is a world-class athlete. I've had tight matches against him before," Park said Sunday. "He was more aggressive than usual, and so I tried to defend my turf. Then when the match was close, he was able to score a few points in a row."

Park said he was particularly devastated because he had put in even more work for Tokyo than he had for Rio.

"I'd be lying if I said I didn't feel pressure on my shoulders, especially after what happened in Rio," Park said. "When the status of the Olympics was in doubt because of COVID-19, I even thought maybe it'd be better if the Olympics never even took place. That's how stressed out I was."

Park said he felt great physically, but the loss to Siklosi reminded him that being in top physical form alone sometimes isn't enough in fencing.

"I do have my regrets, but I have to stay focused on the task at hand now," said Park, who has the epee team event coming up Friday. "I have some bumps and bruises. I'll get them treated and get back at it."

Park said he will always feel proud of the way he prepared for the Tokyo Olympics, and he can measure up to anyone when it comes to work ethic.

"I did my absolute best here," Park said, "And I'll continue to do that." (Yonhap)