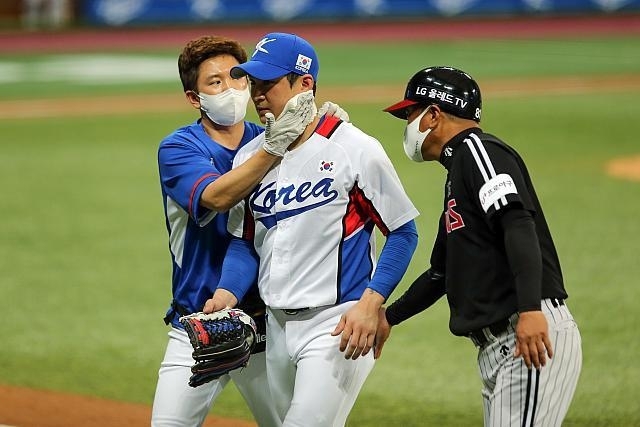 Oh Ji-hwan (C) of the South Korean Olympic baseball team is tended to by a team trainer after taking a spike from a base runner during a pre-Tokyo Olympic tuneup game against the LG Twins of the Korea Baseball Organization (KBO) at Gocheok Sky Dome in Seoul on Saturday, in this photo provided by the KBO. (KBO)
Two key players on the left side of the South Korean infield have sustained minor injuries in a recent pre-Olympic tuneup game.

Shortstop Oh Ji-hwan received five stitches to his neck after a collision with a base runner during the national baseball team's exhibition game against the LG Twins of the Korea Baseball Organization (KBO) on Saturday in Seoul. A KBO official said Oh is fully participating in team practices.

Oh was trying to tag out Chae Eun-seong as he slid into the second base bag, and Chae's spike caught Oh on the left side of his neck.

Also in the game, third baseman Hur Kyoung-min took a pitch to his calf and was lifted for precautionary reasons. The KBO official said Hur will be good to go when the Olympic tournament starts in four days for South Korea.

Oh and Hur are highly regarded defenders at their respective positions in the KBO. Manager Kim Kyung-moon has stressed the importance of infield defense at the Olympics, given the relative inexperience of his young pitching staff.

South Korea, the defending Olympic gold medalist, will play its final tuneup game against the Kiwoom Heroes of the KBO and then depart for Japan on Monday. Its first preliminary game is against Israel on Thursday. (Yonhap)