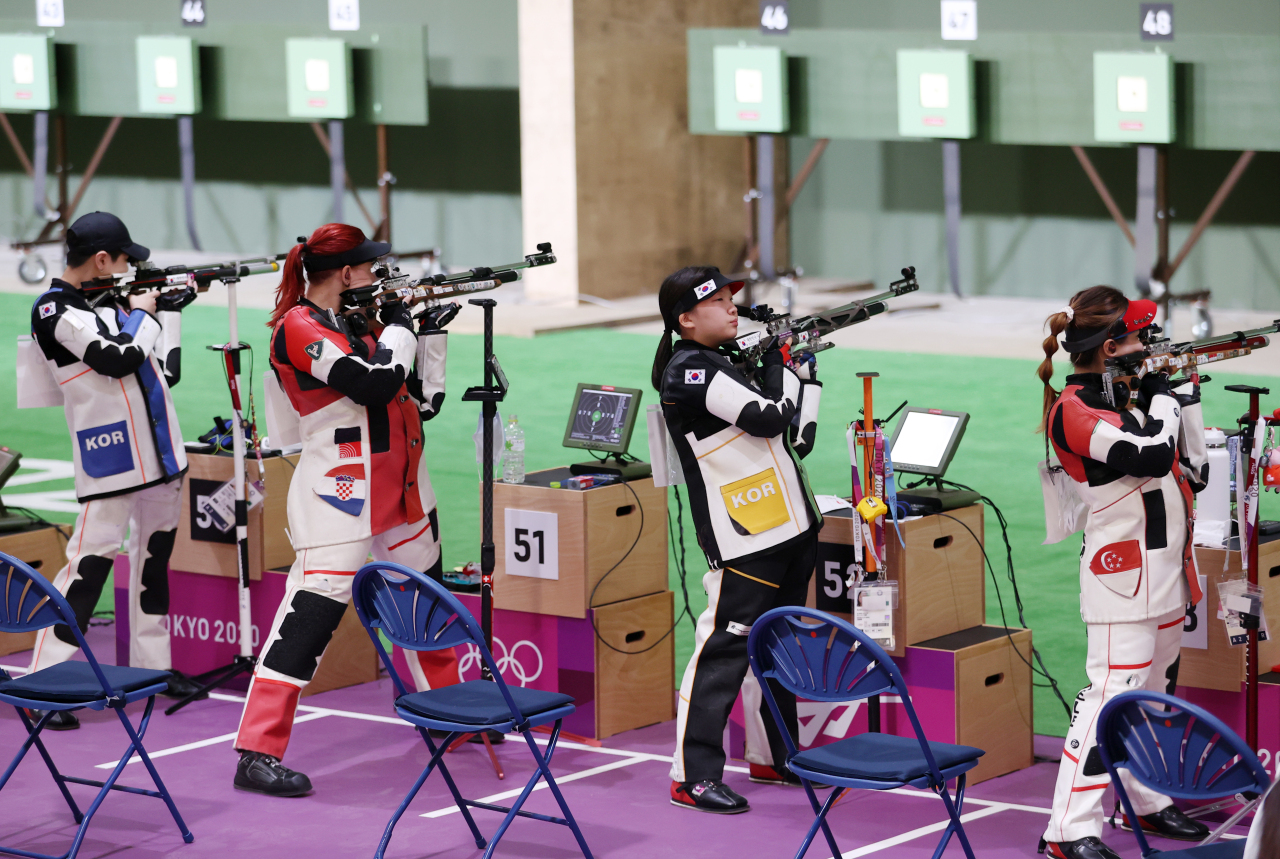 Kwon Eun-ji and Park Hee-moon occupied the two last places in the women's 10m air rifle final at Asaka Shooting Range in Tokyo on Saturday. This was the first medal event of these Olympic Games.

Park, 20, was the first shooter among eight finalists to be eliminated with 119.1 points, and the 18-year-old Kwon was next to go in the following elimination stage at 145.4 points.

Park ranked second in the qualification round earlier in the day with 631.7 points, and Kwon was fourth with 630.9 points, making South Korea the only country with two finalists in the event. The absence of two contenders from India, world No. 1 Elavenil Valarivan and No. 3 Anjum Moudgil, raised hopes for Park and Kwon to reach the podium in their Olympic debut.

Park came in ranked 124th in the world while Kwon was 58th.

The eight finalists first fired two five-shot series, each to be completed in 250 seconds.

After the first series, Kwon Eun-ji and Anastasiia Galashina of the Russian Olympic Committee were tied for the lead at 52.5 points. Park was bringing up the rear end with 48.6 points.

Kwon slipped to fourth place after the second series with 104.2 points, 0.5 behind the leader from China, Yang Qian. Park remained in last place with 99.4.

Then the elimination stage ensued, with the lowest-scoring shooter to be knocked out after the second shot. Park was the first one to be sent packing.

Kwon was tied for fifth at that point with 125 points, a full point back of Galashina.

The elimination process continued, with the lowest-ranked shooter getting sent home after every two shots.

Kwon couldn't keep up with the leaders. After another two shots, Kwon was tied with Mary Carolynn Tucker of the United States for the lowest score with 145.4 points.

They needed two shots in the shoot-off to determine who would stay alive, and Tucker held off the South Korean 10.8-10.5.

Both South Korean shooters said they could live with the results, knowing they'd given their best shots.

"I am disappointed, but I still have the mixed event left," Kwon said of the competition scheduled for Tuesday. "I now have the feel for this venue, having shot at both the qualification range and the final hall. I should be able to do well in the mixed competition."

Kwon said she didn't get as nervous as she'd feared. But Park said butterflies got to her in the final, which she said prevented her from competing to the best of her ability. This will be part of her growth

Yang claimed the gold with an Olympic record score of 251.8 points, 0.7 better than Galashina. Nina Christen of Switzerland took bronze.

No South Korean has won a medal in this event since Kang Cho-hyun grabbed silver in 2000. (Yonhap)