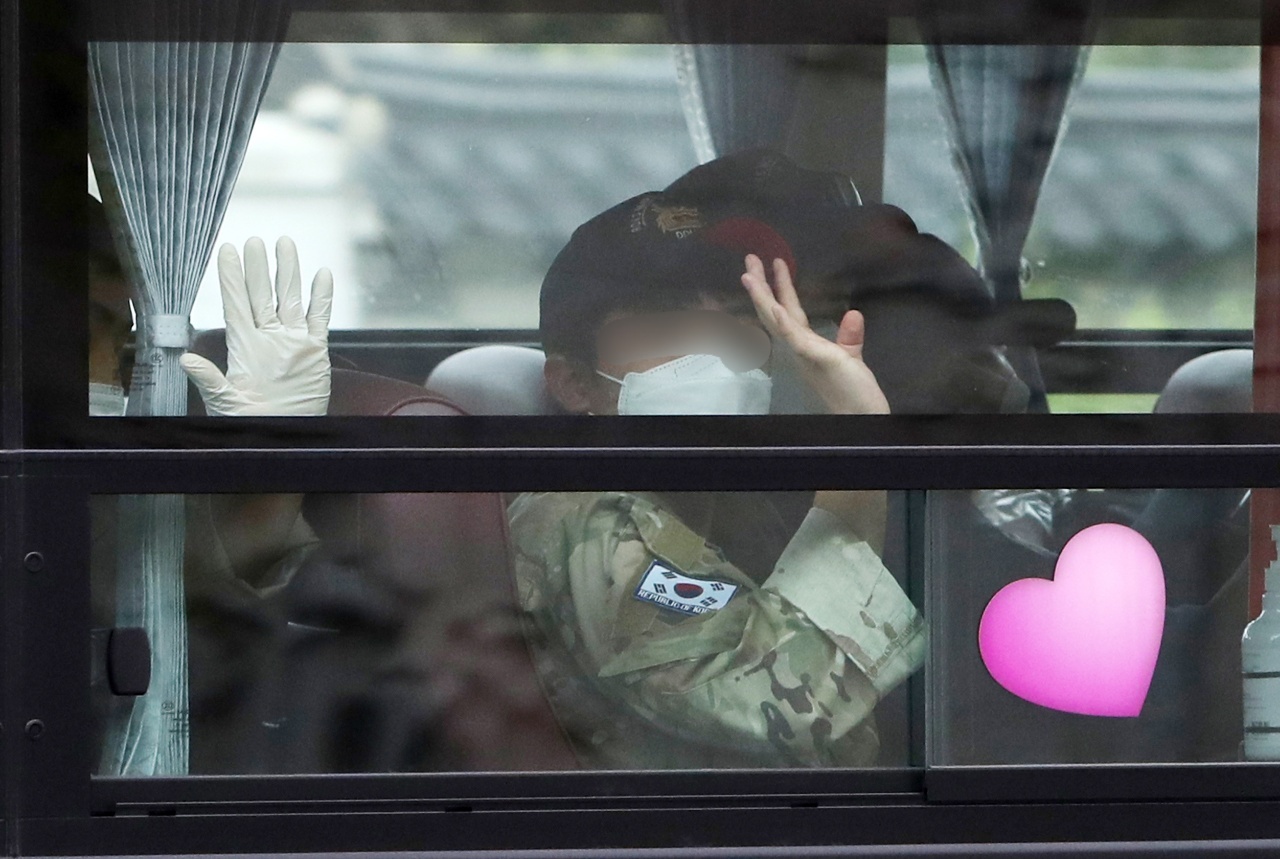 A service member of the Cheonghae Unit is waving a hand to reporters as he heads to a COVID treatment center from Seoul Air Base, where the unit was airlifted from Africa on Tuesday. The anti-piracy unit has cut short its mission after reporting a massive COVID outbreak. (Yonhap)
Seamen on South Korea’s unvaccinated anti-piracy mission who returned home from Africa this week because of a massive COVID outbreak aboard their warship said Friday that the coronavirus could have spread onto the vessel from food supplies they loaded from a nearby port.

A seaman from the 301-strong Cheonghae Unit, which arrived here Tuesday with more than two-thirds of its crew infected, exhibited cold symptoms on July 2, a day after the destroyer made a four-day supply stop at a port. Many others later showed similar symptoms.

“I’m guessing the coronavirus came from those supplies,” said an officer, who spoke by telephone and asked to remain anonymous citing the military policy. “The supplies were not properly sealed.”

The officer noted seafood and fruits were not as well protected from outside contamination as other frozen foods, and the ship did not go through extra steps to clean seafood from potential infection.

“Some of the boxes were torn up. It’s hard to pin down where exactly, but the fact that our cooks were one of the first to show symptoms raises reasonable doubt,” said another soldier, who also asked to remain anonymous.

But health authorities were wary of blaming the food supplies for the worst outbreak the military has seen since January last year when the pandemic started.

“It’s all still a working theory, one of many that has yet to pan out,” a health official said, adding aggressive contact tracing needs to be done to find conclusive evidence

In the telephone interview, the seamen essentially admitted that they were thrown off by COVID self-test kits they initially used to diagnose those who complained of cold or pneumonia symptoms. The test kits ruled all negative for COVID.

“It was days later when we brought in local medical specialists to administer the industry-standard PCR tests,” one officer said, adding the military began to enforce strict quarantine procedures after the test, which found the first six COVID patients.

That was the first case of infection Cheonghae confirmed on July 15, and three days later, the military flew aircraft to airlift the entire crew back home. Many service members who had tested negative for COVID on self-test kits were believed to have been infected.

Of the 271 infected patients, one is severely ill with the rest members exhibiting mild to moderate symptoms.

On Friday, the military, which is accused of dropping the unit from the vaccine priority list, admitted that it also forgot to provide better COVID self-test kits to the crew when they headed to Africa in February. Cheonghae packed antibody tests, which take much longer than antigen tests to detect infection.

“We just dropped the ball there,” a military official said.