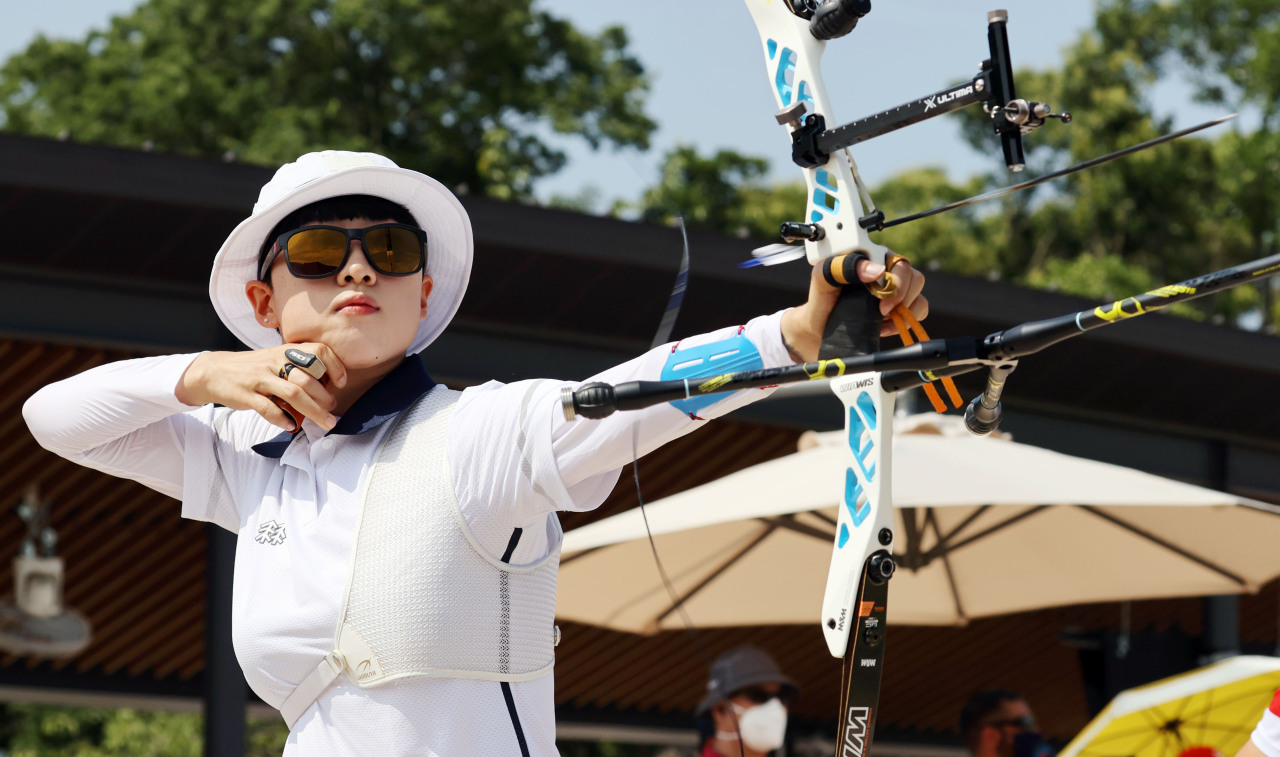 An San won the women's ranking rounds with 680 points out of a maximum 720 at Yumenoshima Park Archery Field in Tokyo, breaking a 25-year-old Olympic record by seven points. Archers took 36 arrows in each of the two halves, with a maximum 10 points per arrow.

An's two teammates, Jang Min-hee and Kang Chae-young, rounded out the top three with 677 and 675 points. Both scores were better than the previous Olympic record, held by Lina Herasymenko of Ukraine.

The trio's combined score of 2,032 points was also an Olympic record, as they broke South Korea's own record of 2,004 points from the 2008 Beijing Olympics.

South Korea, which already leads the all-time gold medal count with 23, looks quite capable of adding to that total this year. The fact that An, Jang and Kang even qualified for the South Korean Olympic team makes them instant medal contenders, considering the country's considerable depth in archery talent pool.

An, the youngest member of the women's team at 20, now has a chance to become the first archer to win three gold medals at a single Olympics.

The mixed team event has been added to the individual and team events for women and men. An will represent the country in Saturday's mixed event as the country's top archer from the ranking round.

"I'll try to do my best in all three events coming up, and the rest will take care of itself," An said. "I am pleased that all the work I've done to this point paid off with the good score today."

Kang Chae-young, the world record holder in the ranking round with 692, couldn't overcome a slow start -- she shot four 8s and even had a 7 from her first 36 arrows -- and ended up five points back of An.

That's an unfamiliar position for Kang, who later blamed her wobbly start on conditions that were "much different" than other international events.

Kang is the senior member of the women's team at 25, also a place she's not entirely used to, after years of being the youngest archer on national teams.

"I want to make sure I bring out the best in my younger teammates," Kang said. "I've never been the oldest archer on the national team before. I'll do my best from this new position."

Jang, who outscored An 338-335 in the second half, admitted a lot of things are new to her in her first Olympics, but she won't let that faze her.

"I've prepared really hard for this, and I want to see that work pay off here," Jang said.

An talked about the significance of carrying the national flag at the Olympic archery event and the pressure to extend the country's rich run of success.

"It's an honor to represent the country but at the same time, I feel the weight of responsibility," An said. "I just have to shake off that pressure and put faith in all the practice I've done to get here." (Yonhap)