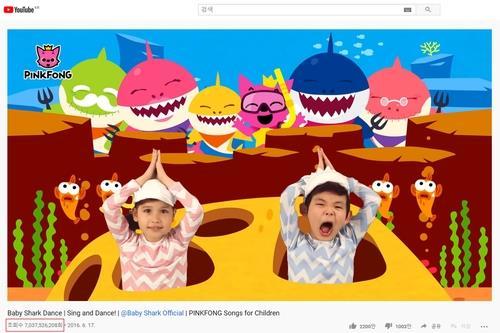 This photo, provided by SmartStudy, shows a screenshot of the video "Baby Shark Dance" on YouTube. (SmartStudy)
A Seoul court on Friday ruled against an American composer in a plagiarism suit he brought against the producer of the popular South Korean children's song "Baby Shark" two years ago.

The rhythmic two-minute song featuring a shark family and their underwater hunt for small fish has gone viral in cyberspace and on the small screen at home and abroad. "Baby Shark Dance," a sing-and-dance video for the megahit children's song, has racked up more than 9 billion views on YouTube.

Only, whose legal name is Jonathan Wright, filed a lawsuit with the Seoul court in March 2019, claiming that the South Korean song plagiarized his own song "Baby Shark" remade in 2011 with a unique rhythm to an orally transmitted folk song.

But SmartStudy has rejected the plagiarism claim, saying its song was a recreation of a traditional North American children's song that has no valid copyrights. (Yonhap)