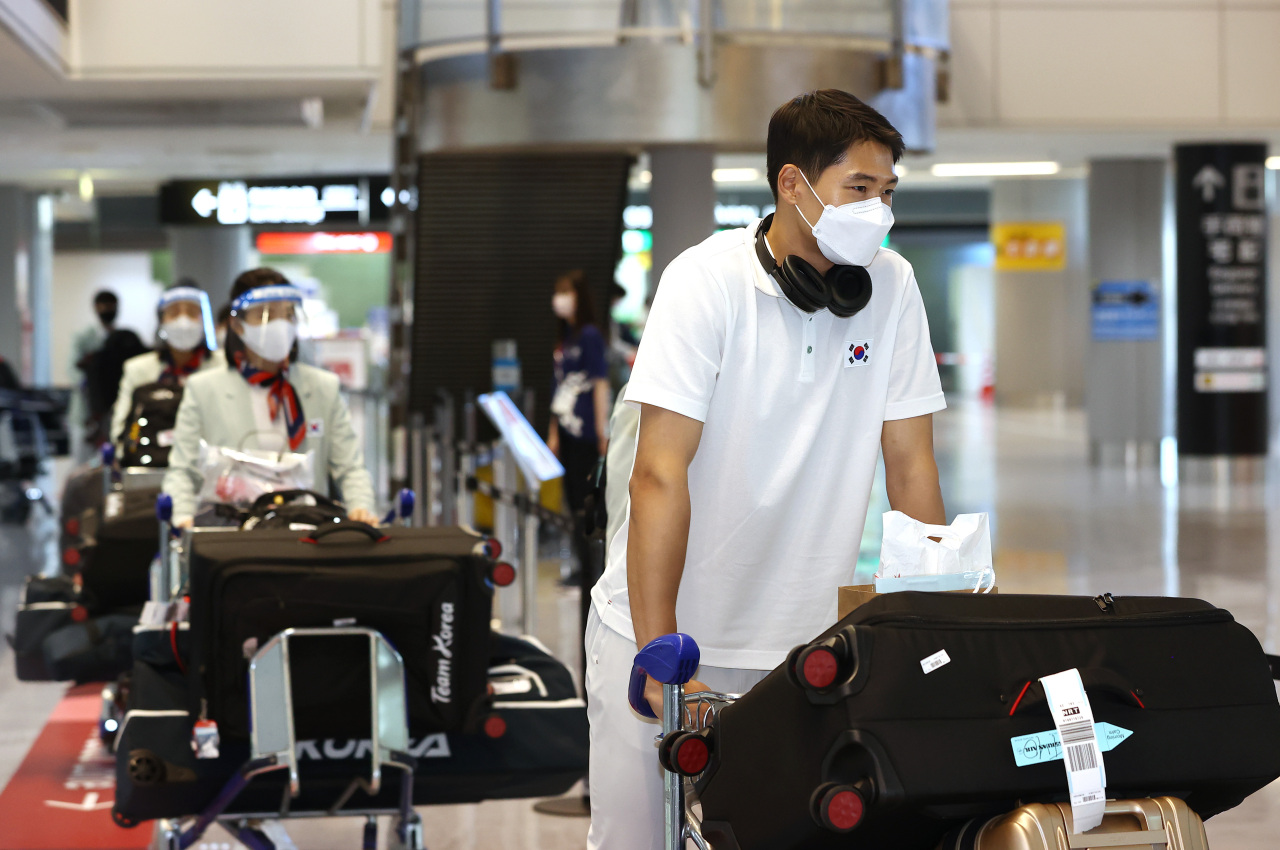 South Korean sabre fencer Oh Sang-uk (R) carries his bags after landing at Narita International Airport in Narita, east of Tokyo, for the Tokyo Olympics on Monday. (Yonhap)
TOKYO -- South Korea is going into the Tokyo Olympics ranked world No. 1 in the men's sabre fencing. The ace of the squad, Oh Sang-uk, is at the top of the individual rankings, too.

The country has earned the favorite status in both the team and individual events here. And to hear coach Kim Hyoung-ryul tell it on Wednesday, all the prescouting work is complete.

"We came here all prepared," Kim said. "For the final few days before the competition, it will come down to repeating what we've been practicing."

While at home, the fencers trained on the replica Tokyo Olympic final piste set up at the Jincheon National Training Center in Jincheon, about 90 kilometers south of Seoul. The elevated center stage had all the requisite lighting and color patterns, with the "Tokyo 2020" logos plastered around the piste.

The piste was installed inside an indoor tennis training facility at Jincheon, allowing fencers to get a feel for the Olympics well beforehand.

"We believe it had positive impact on our preparation. Fencers and coaches were really happy with the setup," Kim said. "There are some restrictions on where we can train here. We're trying to get the athletes relaxed and help them stay ready."

Oh will go for a double in Tokyo. He had a bout with COVID-19 in March, and the coach said the fencer is fully recovered.

The individual sabre event takes place Saturday, the first full day of competition after the opening ceremony. The team event, with Gu Bon-gil, Kim Jung-hwan and Kim Jun-ho joining Oh, is scheduled for next Wednesday.

From that quartet, Gu and Kim Jung-hwan were also members of the gold medal-winning team at the 2012 London Olympics. (Yonhap)