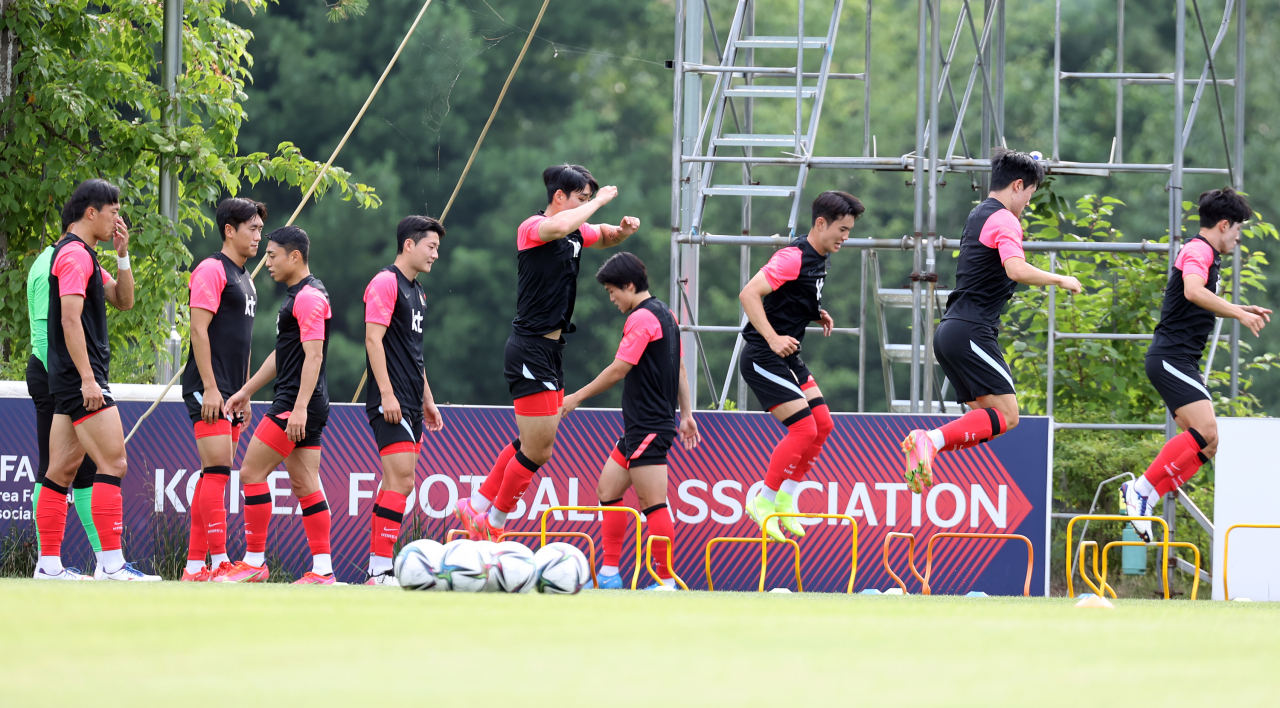 Members of the South Korean men's Olympic football team train at the National Football Center in Paju, Gyeonggi Province, on July 6, 2021. (Yonhap)
Entering their final stretch of preparation for the Olympic men's football tournament, South Korea will host a pair of Tokyo-bound countries in tuneup matches this week.

South Korea will first take on Argentina at 7:30 p.m. Tuesday at Yongin Mireu Stadium in Yongin, about 50 kilometers south of Seoul. Then at 8 p.m. Friday at Seoul World Cup Stadium, South Korea will face France.

Coached by Kim Hak-bum, South Korea will depart for Japan on Saturday.

In his prematch press conference Monday, Kim said the team's preparation, on a scale of 100, has reached "about 70 to 80" in terms of players' conditioning and tactical understanding. Kim said he will use the next two matches to identify any lingering issues that must be fixed before the Olympics.

"We've reached a point where any one of our players will be ready to take the field and get the job done," Kim said in an online session. "Against Argentina, I will keep an eye on how our players respond to different situations."

The country's best Olympics showing to date is the bronze medal from the 2012 London Olympics. Kim and his players have repeatedly said their goal is to top that performance and make new history in Tokyo.

The men's football tournament in Tokyo is open to players 24 years old and younger, but countries can each carry up to three players over that age limit. Coach Kim selected striker Hwang Ui-jo, midfielder Kwon Chang-hoon and defender Kim Min-jae as his three overage players.

"I don't really need to tell them anything. They're going to take care of business on their own," the coach said of his veterans. "If I talk about specific expectations for those guys, it will put too much pressure on their shoulders.

The trio should get a ton of minutes throughout the tournament, with the 20-year-old midfielder Lee Kang-in, the team's youngest player, also expected to assume major playmaking responsibilities.

In his previous camps before finalizing his roster, coach Kim had emphasized the importance of conditioning, reasoning that players must be able to endure hot and humid midsummer conditions in Japan. Once his Olympic roster was set, Kim has spoken about shoring up defensive cohesion and sharpening set pieces.

Asked on Monday whether new set piece strategies will be put into practice in the two upcoming matches, Kim said, "You won't see any of that."

"We're not going to show our cards, knowing that our opponents (at the Olympics) will see them," Kim added. "The same goes for our lineup. We'll find ways to be as effective as possible without revealing too much of our plans."

While South Korea have some depth in attacking midfield spots, they're decidedly thinner at fullbacks, especially on the left side.

Argentina and France should provide the type of difficult tests for South Korea that they didn't have when playing Ghana twice in early June.

Argentina won their regional Olympic qualifying tournament and will have players joining in from all over the world, including Alexis Mac Allister of Brighton & Hove Albion F.C. in the Premier League and Spain-based defender Nehuen Perez, who spent this past season with Granada, on loan from Atletico Madrid.

France finished third in the European qualifying campaign behind Spain and Germany. The three overage French players are Andre-Pierre Gignac and Florian Thauvin of Tigres UANL, and Teji Savanier of Montpellier.

At the Olympics, Argentina will face Egypt, Spain and Australia in Group C, and they and South Korea could meet in the semifinals.

France will be in Group B against Japan, South Africa and Mexico, meaning a quarterfinals date against South Korea is a possibility. (Yonhap)