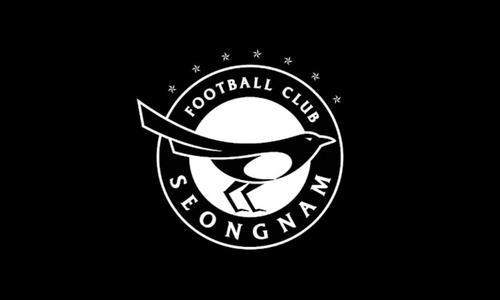 This image provided by Seongnam FC on Monday, shows the K League 1 clubs emblem. (Seongnam FC)
Eight members of the South Korean football club Seongnam FC have tested positive for the novel coronavirus, putting the resumption of their season next week in jeopardy.

Seongnam said 31 players and 15 staffers were tested, and two are expected to get their results Tuesday.

The top-flight K League 1 has been on a midsummer break since the end of May, and clubs are scheduled to return to the pitch this month, starting with the FC Seoul-Incheon United match Wednesday. Seongnam, which had to play three makeup matches in June after having them postponed in May due to a COVID-19 case for FC Seoul, are set to return on July 20 against Incheon.

Seongnam ran training camp from last Monday to Saturday in Goseong, about 470 kilometers east of Seoul in Gangwon Province. On Saturday, two coaches exhibited symptoms associated with COVID-19 and tested themselves using self-diagnostic kits. One coach was positive, and the follow-up polymerase chain reaction (PCR) test produced the same result.

The K League has already postponed a July 20 match between FC Seoul and Jeju United, after one Jeju player was infected with COVID-19 and forced his team into self-isolation.

With the new COVID-19 cases on the upswing across the country in the fourth wave of the pandemic, professional baseball has also been hit hard of late. Five individuals from two clubs in the Korea Baseball Organization (KBO) have tested positive for the virus through the weekend, causing a handful of games to be wiped out. The KBO will meet with club CEOs later Monday to discuss a possible suspension of the regular season. (Yonhap)