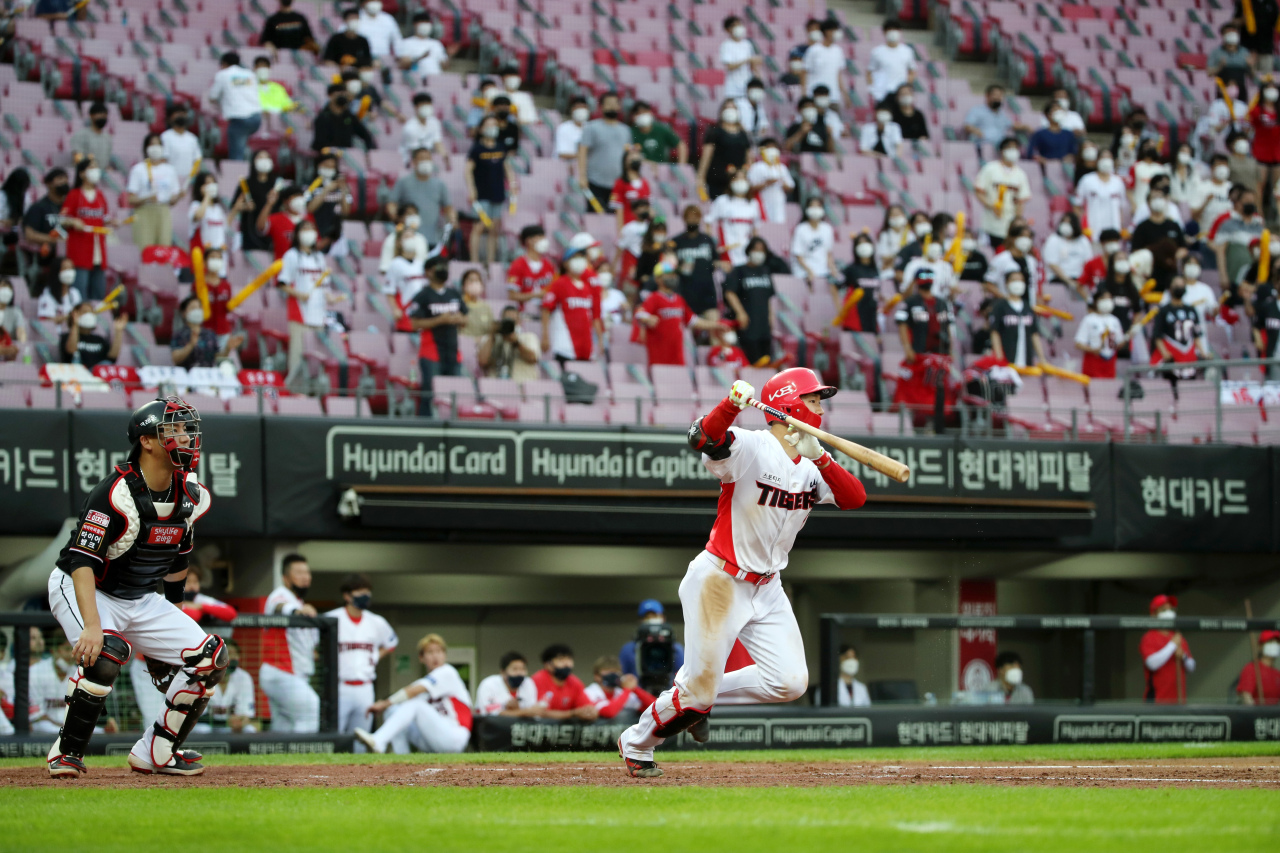 Fans attend a Korea Baseball Organization regular season game between the home team Kia Tigers and the KT Wiz at Gwangju-Kia Champions Field in Gwangju, 330 kilometers south of Seoul, on Friday. (Yonhap)
The South Korean professional baseball league held an emergency meeting with club executives Sunday to discuss a possible suspension of the ongoing season, with another round of talks with higher-ranking officials set for Monday, in light of multiple coronavirus cases involving two clubs.

The Korea Baseball Organization (KBO) said Sunday it met with general managers of the 10 clubs earlier in the day to go over COVID-19 protocols and league operations. Then on Monday, the designated off day across the league, the KBO will sit down with CEOs from the 10 teams, with the potential suspension of the season on the agenda.

The KBO has had to cancel a handful of games over the past two days due to COVID-19 cases. Through Saturday, three members of the NC Dinos and two from the Doosan Bears had tested positive for the virus, forcing three out of five games scheduled for that day to be canceled.

Under its health and safety protocols, the KBO can't unilaterally suspend the season based on a relatively small number of COVID-19 cases. The league allows teams with infected players to add replacements without dropping active players to make room for them.

But in case of a massive outbreak, the league reserves the right to call a meeting with club representatives and discuss possibly putting the season on hold.

The suspension could last as long as three weeks: two weeks for isolation of healthy members of clubs and one week for teams to practice before returning to action.

The KBO is scheduled to press pause for an Olympic break from July 19 to Aug. 9. If the KBO decided to put the season on hold immediately, teams will then only miss one week of actual play.

On Saturday alone, the game between the Dinos and Kiwoom Heroes, and another between the Bears and the LG Twins had to be canceled. Then a third game, between the Kia Tigers and the KT Wiz, was also scrapped as the entire Tigers team received their tests. The Tigers had played the Bears on July 2 and last Sunday.

The rest of the Dinos are being isolated in their road hotel and the Bears' players and staff who have tested negative are staying home.

The Twins-Bears and the Dinos-Heroes games for Sunday were also canceled under COVID-19 protocols.

Players and staff for the Tigers have all tested negative, and their game against the Wiz will be played as scheduled at 5 p.m. Sunday, barring inclement weather. Two other games, between the Lotte Giants and the Samsung Lions in Daegu, 302 kilometers southeast of Seoul, and the Hanwha and the SSG Landers in Incheon, 40 km west of the capital, will also be played.

On Friday, two members of the Dinos tested positive for COVID-19, and the Dinos-Heroes game got wiped out. The Twins-Bears game was canceled out of precaution because the Bears had played the Dinos in Seoul on Tuesday and Wednesday. The entire Bears team received COVID-19 tests Friday, and two results came back positive, while one additional Dinos player got a positive result in a teamwide retest.

The Dinos received their initial tests Thursday after a guest at a Seoul hotel the team had stayed in for the road trip had been infected.

The Eagles had also stayed at the same hotel on the previous weekend, but their players and staff all tested negative. The Eagles played both Friday and Saturday. (Yonhap)