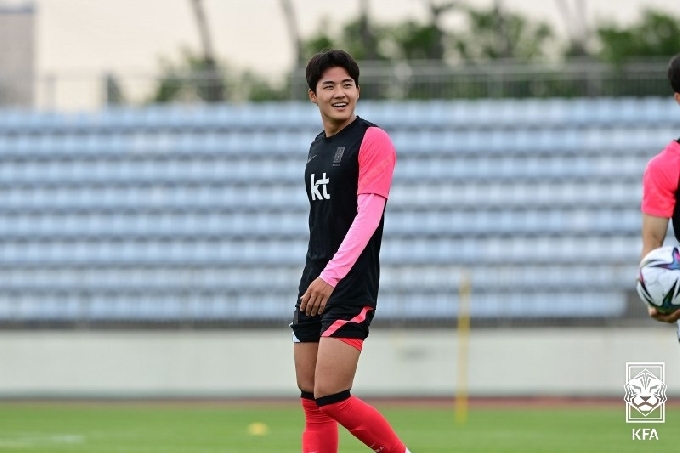 He was disappointed that he wasn't selected as one of 18 players by head coach Kim Hak-bum last Wednesday, but he was also somewhat relieved that he wouldn't be going through the pressure cooker that is the Olympic tournament.

But Kim's fate changed in less than 24 hours. FIFA decided to grant a special expansion of rosters for all men's football teams for the Tokyo Olympics, citing COVID-19 concerns. Teams could now add four players, although the matchday roster would remain the same at 18.

The day after the 18-man squad was unveiled, Kim was picked as one of the four new faces.

"I expected to make the team at first," Kim told reporters Tuesday at the National Football Center in Paju, Gyeonggi Province, where the team is having its final training camp before the Tokyo Games.

"The coach said he was sorry to have made us feel so dejected," Kim added, referring to himself and three other additional picks. "He said, 'You should all prove that I made the wrong decision to leave you off at first.'"

Asked why he thought he wasn't picked for the 18-man team, Kim said it may simply have been the case of the coach having better options at his position.

But that doesn't mean Kim lacks confidence in himself. He said his "aggressive passing and first touch" can serve the team well on offense.

Kim may have to beat Valencia CF midfielder Lee Kang-in for playing time in midfield. Though Lee is the youngest member of the team at 20, Kim said, "He's such a talented player, and I am learning a lot from him just by watching him at practice."

"If I get into a match, I'd love to connect with any forward to set up opportunities," Kim added.

Whereas Kim Jin-gyu felt he had a shot at joining the first edition of the team, fullback Seol Young-woo didn't have many expectations for himself.

"Just a few months ago, I didn't think I'd play in the Olympics," Seol said. "Even until the last minute, I wasn't that sure."

Coach Kim had been riding Seol hard for the past couple of years, trying to help the 22-year-old realize his full potential.

"The coach identified areas where I needed to improve, and I think he saw that I had put in the work to get better," said Seol, who is able to play as both right and left fullback. "He was really tough on me, but I kept at it because I wanted to play in the Olympics."

The coach has singled out the fullback position as the weakest link on the team. Seol admitted he was a little upset hearing that but added: "That's a fact. We're perfectly set at all other positions. (Fullbacks) just have to work harder and get better." (Yonhap)