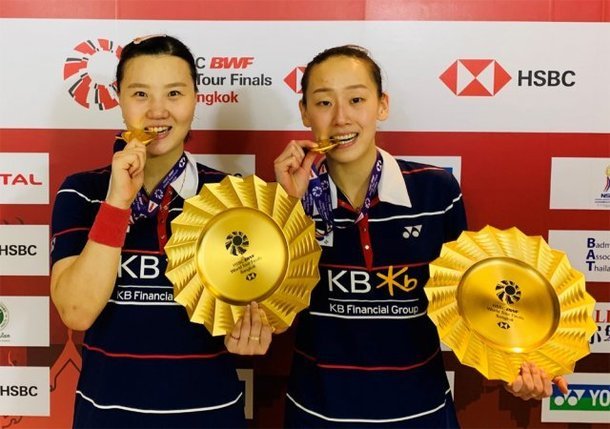 This Jan. 31, 2021, file photo provided by the Badminton Korea Association shows women's doubles players Shin Seung-chan (L) and Lee So-hee, after they won the Badminton World Federation World Tour Finals at Impact Arena in Pak Kret, Thailand.(Yonhap)
They have been friends for 14 years and have won world junior titles together. And finally, South Korean badminton stars Lee So-hee and Shin Seung-chan will team up in the women's doubles at the Olympics this summer in Tokyo.

Lee and Shin each competed at the 2016 Rio de Janeiro Olympics with different, older doubles partners. Lee and Chang Ye-na were knocked out of the quarterfinals, but Shin and Jung Kyung-eun grabbed bronze.

Lee and Shin won the women's doubles titles at the world junior championships in 2011 and 2012, and then collected bronze at the senior worlds in 2014. They were then separated ahead of the Rio Olympics before being reunited at the end of 2017. They believe they've learned enough lessons over the years that can help them in Tokyo.

"In Rio, veterans led the way for us, and we were able to grow so much because of them," Shin, 26, said in a phone interview on Tuesday. "I think we know how to handle ourselves (in major competitions). Now, we're able to pull each other."

Lee, 27, chimed in, "We were young and inexperienced in Rio, and we just did what veterans told us. We'll be on our own now."

Together, they're the world's fourth-ranked women's doubles tandem, the highest position for a South Korean duo. Lee and Shin play similarly aggressive styles on the court, though their personalities are different.

"I have a bit of a temper, but So-hee puts up with me because she's so nice," Shin said with a laugh. "That's why we never get into any fights."

After their reunion, Lee and Shin won the 2018 Fuzhou China Open on the Badminton World Federation (BWF) World Tour over the current world No. 2 duo from Japan, Mayu Matsumoto and Wakana Nagahara. The South Koreans weren't able to get past the top-ranked tandem, Yuki Fukushima and Sayaka Hirota of Japan, in a couple of other BWF tournaments in 2018 and 2019. But Lee and Shin never got a chance to find out how they'd measure up against them in 2020 because the Tokyo Olympics got postponed by one year due to the coronavirus outbreak.

The delay may have been a blessing in disguise for the South Korean team. Lee rehabbed her nagging knee injury and Shin also spent time healing bumps and bruises.

And better health for both led to encouraging results early in 2021. They captured the BWF World Tour Finals gold medal over fellow South Koreans, Kim So-yeong and Kong Hee-yong, in January in Thailand, a week after finishing runners-up to Kim and Kong at the Thailand Open.

As for growing expectations for a medal in Tokyo, Lee said, "We don't consider them added pressure on us. We're grateful for people's interest. We'll leave it all on the court." (Yonhap)