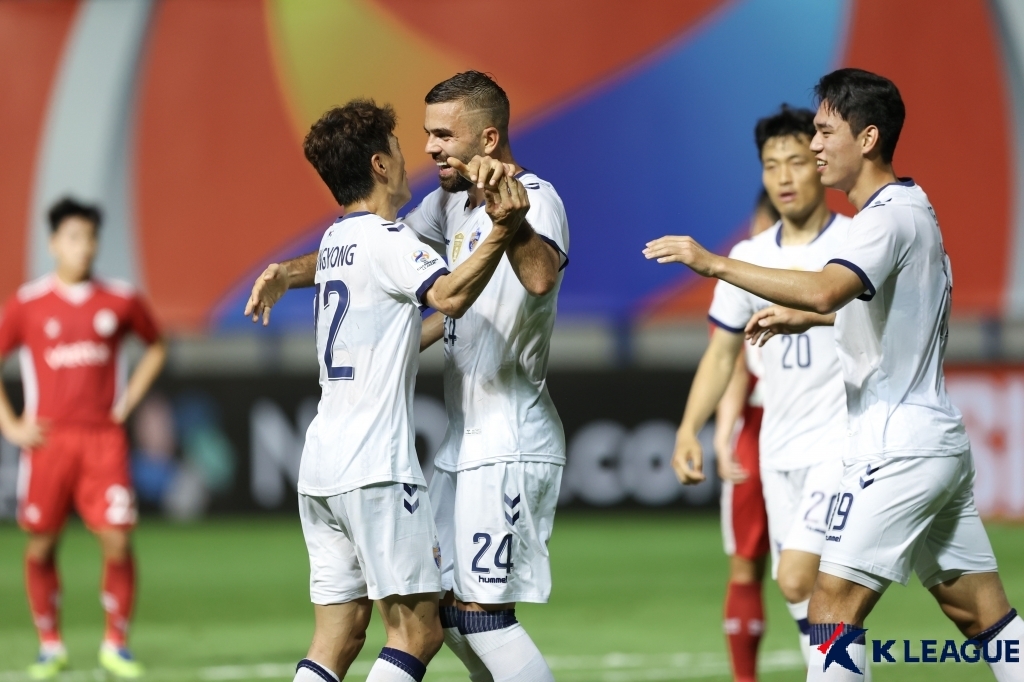 n this June 27, 2021, file photo provided by the Korea Professional Football League, Lukas Hinterseer of Ulsan Hyundai FC (C) is congratulated by his teammates after scoring a goal against Viettel during the clubs' Group F match at the Asian Football Confederation Champions League at Pathum Thani Stadium in Bangkok. (Korea Professional Football League)
All knockout matches at Asia's top club football tournament this year will be played over one leg in centralized venues, the sport's continental governing body announced Monday, citing the need to minimize traveling during the COVID-19 pandemic.

The Asian Football Confederation (AFC) said it has rescheduled knockout matches at its signature club tournament, AFC Champions League, from the home-and-away format to single-leg ties.

The round of 16 matches were already set to be one-and-done affairs, while matches from quarterfinals and on were originally scheduled to be played over two legs.

All of these matches will take place in one venue in each region.

The championship final will be played on Nov. 23. The AFC said it will open the bidding process to its member associations from the West Region to serve as the centralized host for the final.

The ongoing group matches are being held in centralized venues, too. Four South Korean clubs are in action.

Ulsan Hyundai FC, the defending champions, are leading Group F with nine points after three matches. Pohang Steelers are in second place in Group G with 10 points after five matches.

Jeonbuk Hyundai Motors are atop Group H with 10 points from four matches, and Daegu FC are in second place in Group I after three contests.

The AFC Champions League expanded from 32 clubs to 40 clubs this year. The 10 group winners and the top three runners-up from each region will advance to the round of 16. (Yonhap)