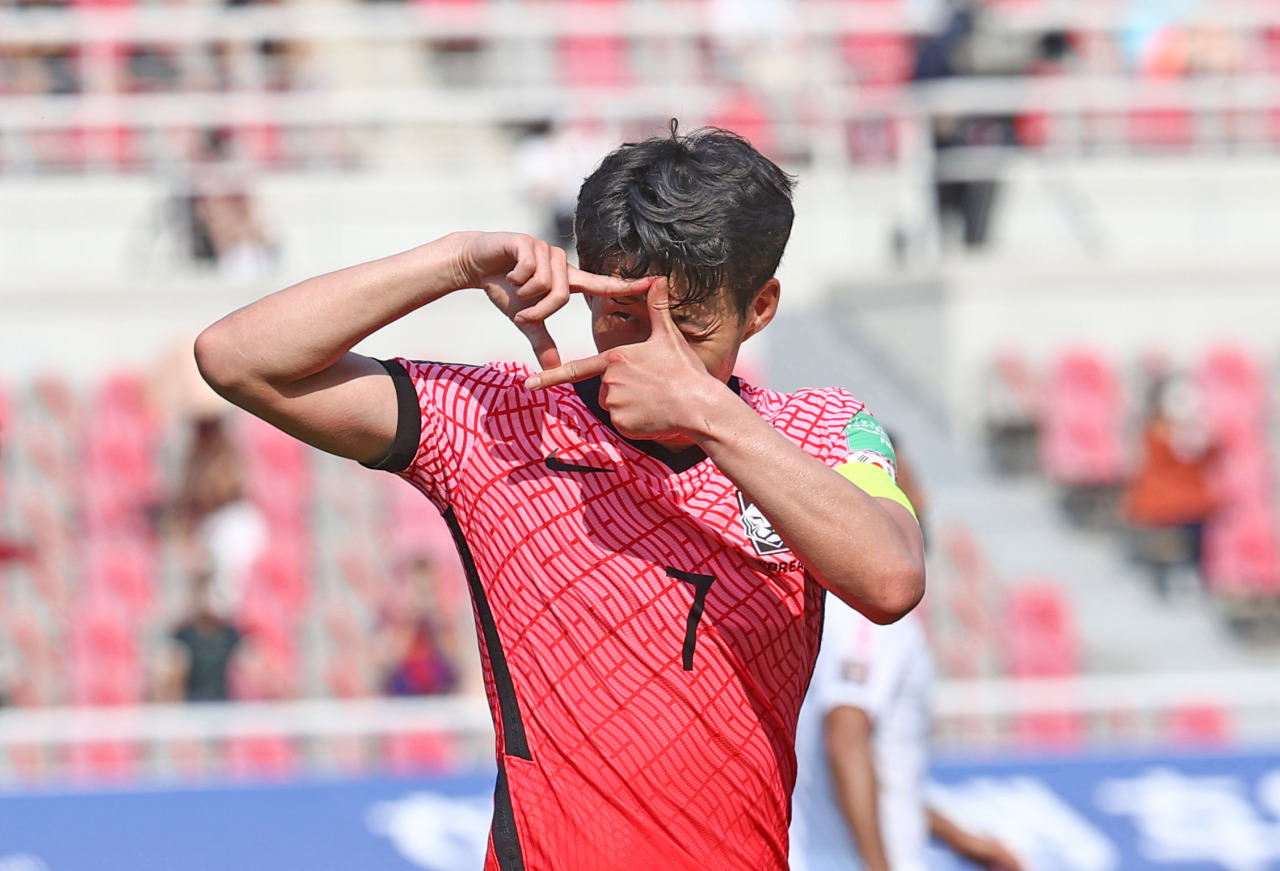 In this file photo from June 13, 2021, Son Heung-min of South Korea celebrates his goal against Lebanon during the teams' Group H match in the second round of the Asian qualification for the 2022 FIFA World Cup at Goyang Stadium in Goyang, Gyeonggi Province. (Yonhap)
Having been paired with four Middle Eastern nations in the final World Cup qualifying round, South Korea will likely have to deal with some frustrating time-wasting antics.

In Group A of the final Asian qualification stage for the 2022 FIFA World Cup, South Korea will take on Iran, Iraq, the United Arab Emirates (UAE), Syria and Lebanon. Those countries are particularly famous for resorting to moves to kill the clock if they have a lead, including feigning injuries and taking their time before spot kicks or throw-ins. These things have happened even in a scoreless match.

"We just have to play well, and there's really not much else we can do about that," Bento told reporters at the National Football Center (NFC) in Paju, north of Seoul in Gyeonggi Province. "Unless rules change and allow the clock to stop when the ball is out of play like in basketball, there's nothing we can do about that problem. And it's not appropriate for us to waste time thinking about variables that we can't control."

Bento and his players most recently found themselves at the wrong end of those time-wasting moves on June 13, when they went down 1-0 against Lebanon only a dozen minutes into their final match in the second round of the World Cup qualification.

Even with nearly 80 minutes of football left, Lebanon appeared more interested in killing the remaining time staying on the ground rather than trying to score an insurance goal. South Korea rallied for a 2-1 victory, and Bento later criticized match officials for not doing anything to discourage time-wasting action.

On Monday, Bento kept the focus solely on his own team.

"We'll just worry about playing good matches," Bento said. "It will start with strong cohesion at the foundation."

The final round, pushed back by a year because of the COVID-19 pandemic, will run from September this year to March next year. South Korea's first match will be Sept. 2 against Iraq at home.

The top two teams from each group will qualify for the World Cup. The two third-place countries will compete in a one-and-done playoff match next May or June. The winner will then move on to the intercontinental playoffs against a team from a confederation to be determined later.

Bento said his team is in a tough group because there isn't much that separates the five countries.

Iran, the top-ranked Asian country at No. 31, will likely present the toughest challenge for South Korea. The Taeguk Warriors have a 9-9-13 (wins-draws-losses) record against Iran, including four losses and two draws in their past six meetings.

"In terms of cohesion, players' individual skills and athleticism, they're a great team," Bento said of Iran. "Although they will be a difficult team to play against, that doesn't mean we can't overcome them. We're a very competitive team, too. I think we're prepared to take on any team, whether we're home or away."

Bento said Iraq and Syria are both physical teams that play with an edge. The UAE play a possession-oriented style of football and feature some skilled players up front, Bento noted.

Nearing his third anniversary as South Korea's boss, Bento said his team is moving in the right direction toward next year's World Cup.

"We haven't been able to play often after the coronavirus outbreak, but we're back on track now," the Portuguese coach said. "We won't have a lot of time before the final round. But we'll field a competitive team that can put together good performances and qualify for the World Cup." (Yonhap)