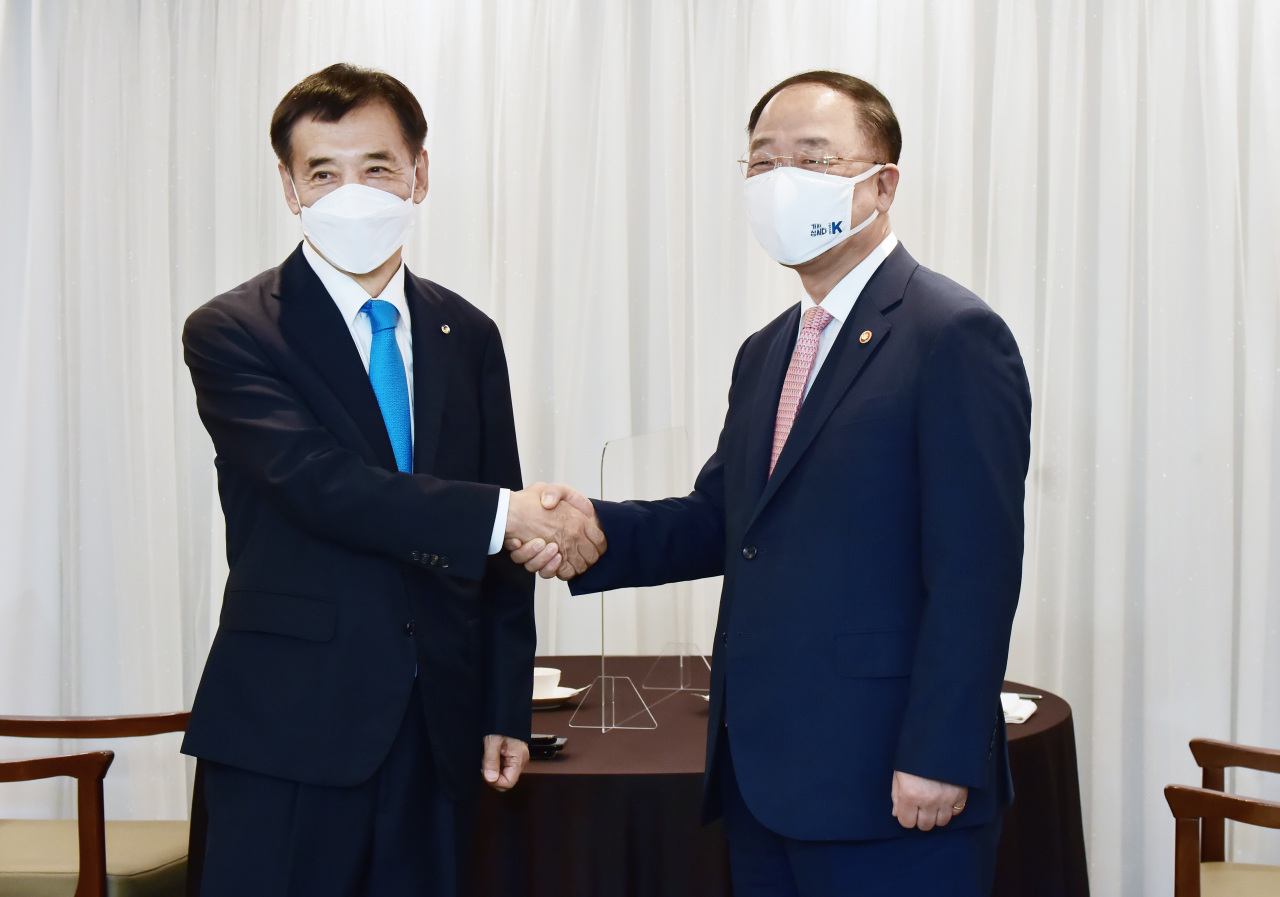 Finance Minister and Deputy Prime Minister Hong Nam-ki, right, shakes hands with Bank of Korea Gov. Lee Ju-yeol after a breakfast meeting at the Korea Press Center headquarters in central Seoul on Friday. (Yonhap)
South Korea’s fiscal policy will be expansionary but its monetary policy could turn slightly more hawkish, the respective chiefs in charge of each said Friday. Both said their solutions would minimize the economic woes stemming from the COVID-19 pandemic.

Finance Minister Hong Nam-ki met Friday with Bank of Korea Gov. Lee Ju-yeol amid controversy over policy discord. There have been strong signals of a rate hike by the end of the year from the central bank, and the government recently unveiled a 33 trillion won ($29.2 billion) extra budget.

“Despite the economy’s faster-than expected recovery, potential risks of unbalanced growth among the sectors, bipolarization and financial imbalance continue to exist,” Hong and Lee said in a joint statement following their breakfast meeting. It was the first meeting between the two chiefs in nearly three years.

“It is in these times that alignment between the fiscal and monetary policies and tackling of their respective roles are more crucial than ever,” they said.

They explained that the current expansionary fiscal policy would have to be maintained to soften blows to the economy caused by the pandemic and to help the most vulnerable segments of society “feel” the economic recovery as well. The pace of monetary tightening will be adjusted in line with the economic rebound to minimize the side effects of long-term monetary easing.

Korea’s economy is displaying a “fast and strong recovery” driven by robust exports, they said, but they expressed concern about the nation’s service sector and the job market continuing to struggle under the influence of the pandemic.

The BOK recently raised its 2021 economic growth forecast by a solid 1 percent to 4 percent.

For the upcoming meeting of G-20 finance ministers and central bank governors in Italy, slated for July 9-10, the two chiefs agreed that the global health system and communication channels among G-20 nations needed to be bolstered. The importance of recovery in the global supply and trade system was also acknowledged.

In June, Lee said “interest rate normalization” would come at an “appropriate time” by the end of the year, setting a solid time frame for a shift toward monetary tightening.

The BOK has kept its benchmark interest rate frozen at a record low of 0.5 percent since May last year to pump liquidity into the market and minimize the financial risks stemming from the COVID-19 pandemic.

In turn, the nation’s household debt has snowballed at an unprecedented pace since last year, as retail investors rushed to the stock and real estate markets to take advantage of low-interest borrowing.

Household credit reached a record high of 1,765 trillion won as of March, up more than 150 trillion won from a year earlier.

Meanwhile, the government’s emergency cash handouts and extra budgets have worried onlookers as they are placing heavy burdens on the national debt.

Since last year, the country has drawn up five extra budgets to cope with COVID-19, amounting to 82 trillion won. The sixth and latest addition would push the number over the 100 trillion won mark.