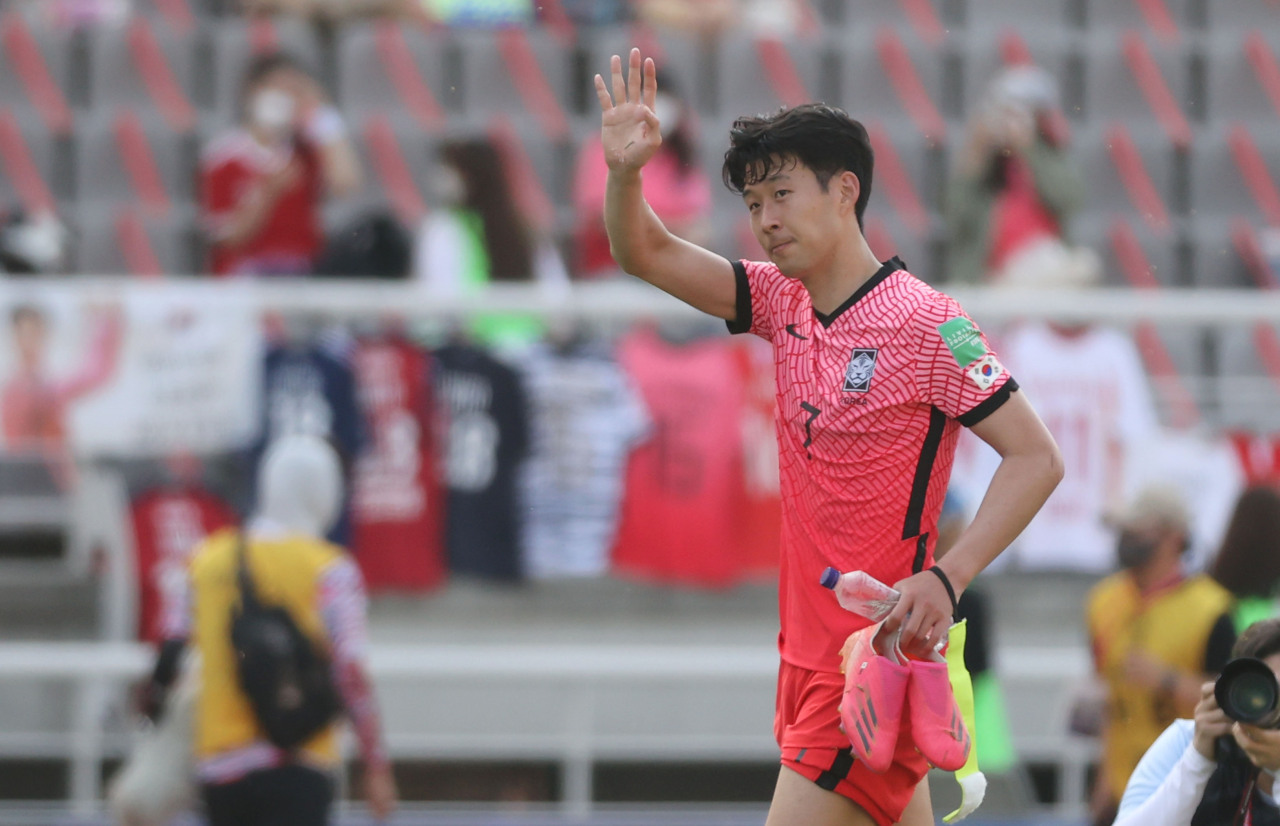 Son Heung-min of South Korea waves to fans after a victory over Lebanon during the teams' Group H match in the second round of the Asian qualification for the 2022 FIFA World Cup at Goyang Stadium in Goyang, Gyeonggi Province. (Yonhap)
Tottenham Hotspur's South Korean star Son Heung-min wasn't selected for his country's Olympic football team despite getting permission from his English Premier League club, an informed source said Thursday.

Son, 28, was not picked as an overage player for South Korea's under-24 football team for the Tokyo Olympics on Wednesday.

The Olympic football tournament is typically reserved for players under 23, and the age limit has been raised to 24 for Tokyo because the competition was postponed by one year due to the

COVID-19 pandemic. Countries are allowed to pick three players each over that age limit and Son, one of South Korea's most talented players, had been considered for a spot.

The Olympic football competition is outside FIFA's jurisdiction, and thus clubs aren't obliged to release their players for the occasion, the way they are for the World Cup or international friendlies.

The source, privy to talks between the Korea Football Association (KFA) and Son's camp, said Son had successfully convinced Tottenham to allow him to represent his country during the July 23-Aug. 8 Olympics.

Still, coach Kim didn't go with what would seem to have been a no-brainer choice.

"Son understands the coach has the right to make roster choices the way he sees fit," the source said, asking for anonymity. "But he's still disappointed, because he went to so much trouble to get Tottenham on board."

Son had played for Kim at the 2018 Asian Games in Indonesia, and helped South Korea to gold medal over Japan. In days leading up to his announcement of the final roster, Kim had said Son had shown a strong desire to play for South Korea once again.

According to the source, Kim met with Son Woong-jung, the player's father and CEO of Son and Football Limited, and specifically asked for help in getting Tottenham's approval.

Then over the weekend, Kim Pan-gon, a senior executive at the KFA, contacted a representative at Son's agency to make the same request.

Even as they were going through an offseason managerial change, Tottenham mulled over Son's situation and gave him the go-ahead sign with the Olympics on Tuesday, the day before Kim unveiled his roster.

Son's camp informed the KFA of the development, but the coach ended up leaving him off after all.

Kim didn't elaborate on reasons why he didn't select Son, only explaining that he picked Hwang, Kwon and Kim Min-jae because he felt they could fill specific needs at their respective positions.

"Son showed great willingness to compete at the Olympics," Kim said. "I'd like to take this opportunity to thank him." (Yonhap)