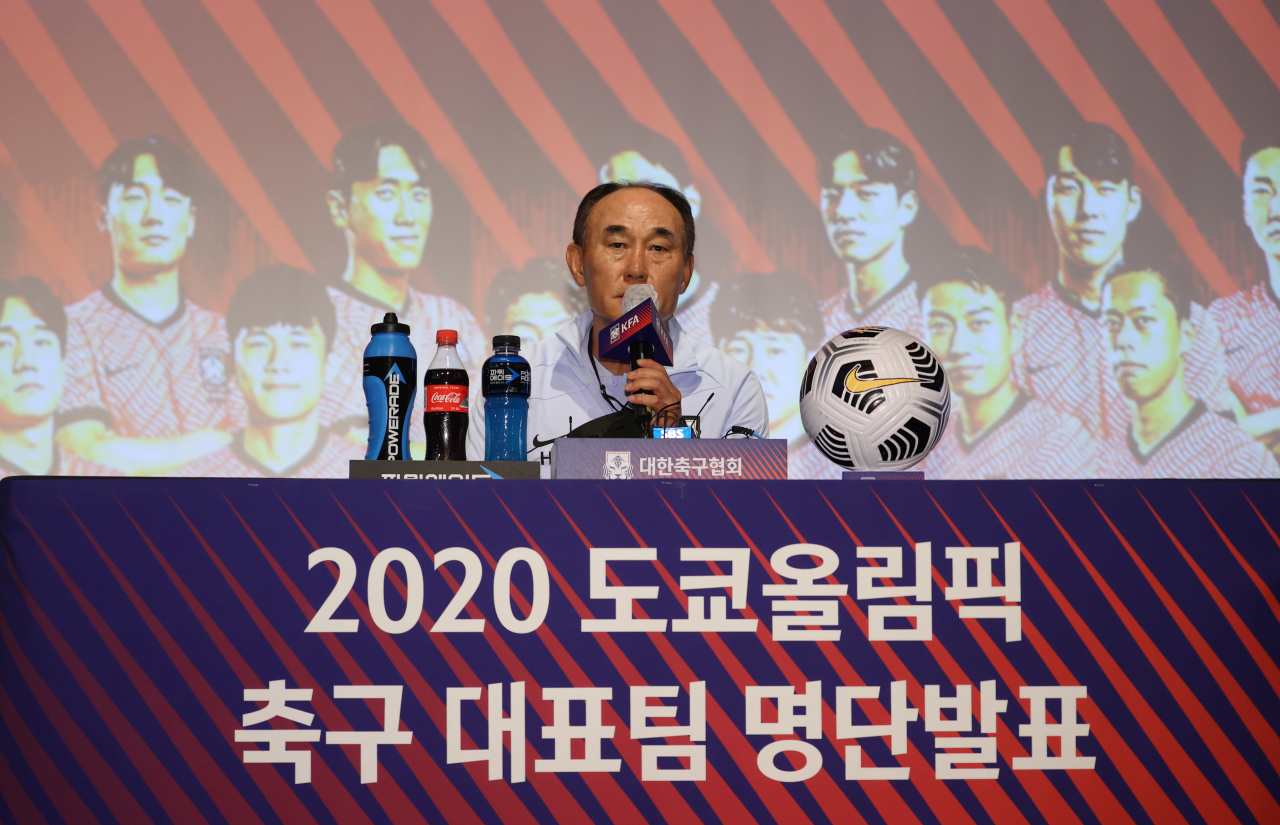 Kim Hak-bum, head coach of the South Korean men's Olympic football team, announces his 18-man roster for the Tokyo Olympics at a press conference in Seoul on Wednesday. (Yonhap)
French league striker Hwang Ui-jo will lead South Korea's attack in their bid for an Olympic men's football medal in Japan this summer.

The Olympic men's football tournament is typically open to players 23 and younger, but the age limit for the Tokyo Games has been raised to 24 because the competition was postponed by a year due to the coronavirus pandemic.

Countries can carry up to three players over that limit and Hwang, 28, is one of the overage trio for South Korea. He's joined by Beijing Guoan centerback Kim Min-jae and Suwon Samsung Bluewings midfielder Kwon Chang-hoon.

South Korea will try to win just their second medal in Olympic men's football, following the bronze medal from the 2012 London Olympics.

Hwang led FC Girondins de Bordeaux in the top French league with 12 goals this past season. He has been the most lethal goal scorer for the senior national team since current boss Paulo Bento took over in August 2018, leading his countrymen with 13 goals in that span.

Hwang also has a long history with coach Kim, having played for him at Seongnam FC in the K League and at the 2018 Asian Games, where he helped South Korea to the gold medal as one of the overage players.

Kim Min-jae has been a defensive stalwart for the senior national team and a coveted player in the international market. With his current deal with Beijing Guoan set to expire in December, Kim, who turns 25 in November, has been linked to multiple European clubs, including Juventus and FC Porto recently.

Coach Kim said he put the defender on his roster even though Beijing Guoan have not yet confirmed the player's availability.

The Olympic tournament is outside FIFA's jurisdiction, and clubs aren't obliged to release their international players for this competition.

"Kim Min-jae is seeking to leave Beijing and join another club, and we don't have the final word on his status," the coach said. "We put his name down anyway because we still have time to make it work. We absolutely need him."

Kwon is a 26-year-old attacking midfielder with a nose for the goal and playmaking chops. In May, Kwon completed his final season with SC Freiburg in Germany and rejoined his former South Korean club, Suwon Samsung Bluewings. He has 26 international caps. Kwon is listed as a forward on the Olympic team.

Kwon ended his European stint and returned home in May to prepare for his mandatory military service with the second-division military club, Gimcheon Sangmu, next season.

But winning a medal in Tokyo would change that plan dramatically for Kwon, because an Olympic medal of any color means an exemption from the military duty for male athletes.

Kim Min-jae and Hwang both earned their exemptions by winning the gold at the 2018 Asian Games. If Kwon can earn his this summer, he won't have to toil in the second division here and could return to Europe without facing any disruption to his career while still in his athletic prime.

Coach Kim insisted players' military status wasn't considered at all, and he only chose players based on their abilities and their fit.

Aside from Hwang and Kim, Valencia CF midfielder Lee Kang-in is the only other overseas-based player. All other players ply their trade in the K League.

At 20, Lee is also the youngest member of the Olympic roster.

Song Bum-keun, who has backstopped Jeonbuk Hyundai Motors to each of the past three K League 1 championships, should be the No. 1 goalkeeper in Tokyo.

The defense will be without longtime U-23 captain Lee Sang-min and his sidekick Jeong Tae-wook will take the captain's armband in Tokyo.

Joining Lee Kang-in in midfield will be a pair of versatile Ulsan Hyundai FC youngsters, Won Du-jae and Lee Dong-gyeong. Won is able to play on the backline as well, while Lee brings a goal-scoring touch to the group.

On offense, Song Min-kyu of Pohang Steelers, the reigning K League Young Player of the Year, will get a taste of his first major international competition. Gwangju FC's Um Won-sang, a key member of the runner-up South Korea at the 2019 FIFA U-20 World Cup, will add speed up front.

South Korea will be in Group B at the Tokyo Games. They will play New Zealand on July 22, Romania on July 25 and Honduras on July 28. The top two teams from each of the four groups will advance to the quarterfinals.

In preparation for the Olympics, South Korea will play two tuneup matches at home in July: on July 13 against a team to be determined and on July 16 against France at Seoul World Cup Stadium. Kim's squad will then fly to Japan on July 17.

Below is the complete list of the team, with players' club affiliations in parentheses.