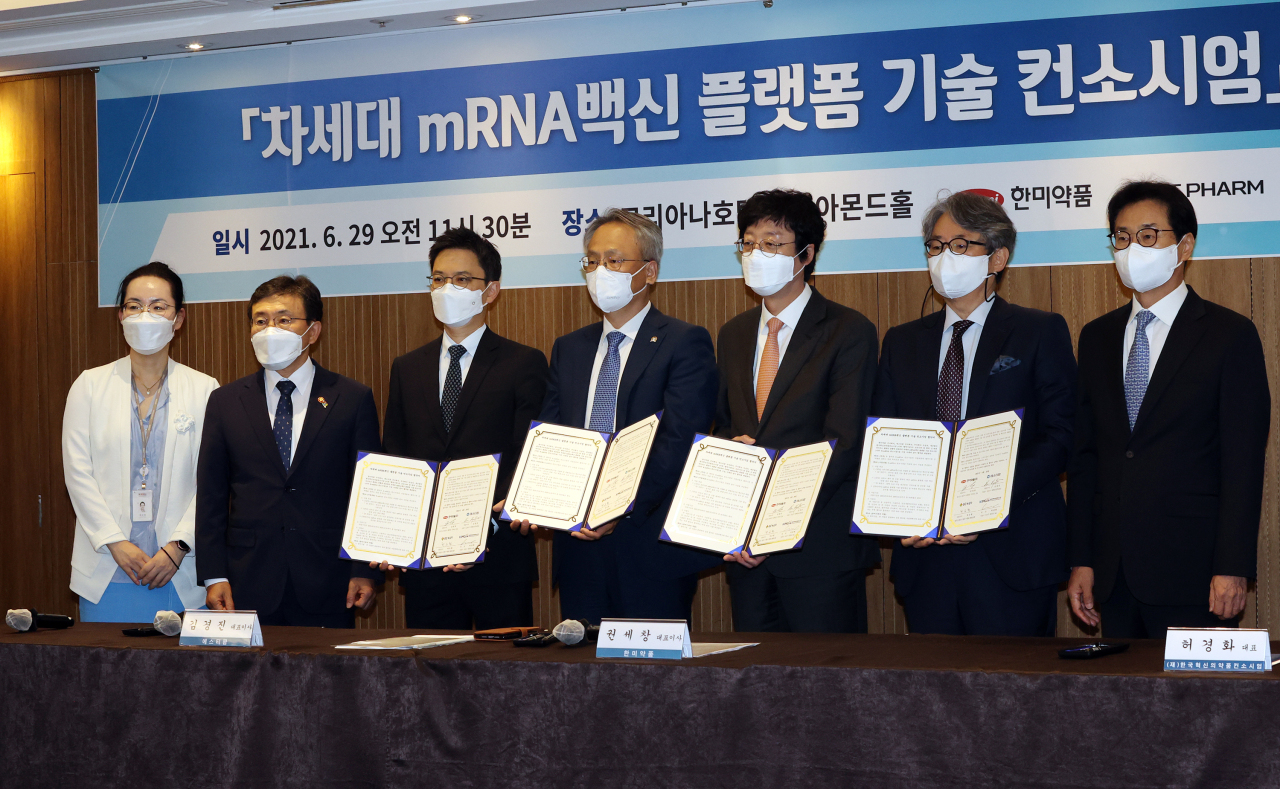 Dubbed the “K-mRNA vaccine consortium,” it will be led by three major firms -- Hanmi Pharmaceutical, GC Pharma and ST Pharm -- and backed by the Korea Pharmaceutical and Bio-Pharma Manufacturers Association and the Korea Innovative Medicines Consortium, a group of officials from 56 local pharmaceutical and biotechnology firms, the ministry added.

Officials from the three firms, as well as the government and the pharmaceutical association, met Tuesday at the Koreana Hotel in Seoul to officially announce the launch of the consortium.

Their first goal is to secure the technology to produce a vaccine using synthetic messenger RNA, or mRNA. Vaccines based on mRNA have emerged as a new, promising modality in the COVID-19 pandemic, with Pfizer and Moderna leading the way. So far, the two US firms are the only ones that have succeeded in developing mRNA vaccines against COVID-19.

The Korean consortium aims to begin production of its COVID-19 vaccine next year to help the country overcome the ongoing pandemic. Its target is at least 100 million doses.

The companies say they will work to expand their manufacturing capacity to 1 billion doses by 2023.

The consortium will also work toward the development of mRNA-based cancer treatments and other applications by 2025.

To bankroll the project, Hanmi, GC Pharma and ST Pharm will together invest over 700 billion won. The funds will be used for future clinical studies and to build manufacturing facilities, according to the consortium.

The consortium added that it would invite more companies to build a pan-industry system to accelerate the development of mRNA-based vaccines.

“The government will exercise best efforts to help the consortium accelerate the development of mRNA vaccine,” Health Minister Kwon Deok-cheol said during the inauguration ceremony Tuesday.

Hanmi Pharmaceutical CEO Kwon Se-Chang said the consortium was “currently taking steps to develop an mRNA vaccine that could be on a par with the mRNA vaccines of Moderna and Pfizer.”