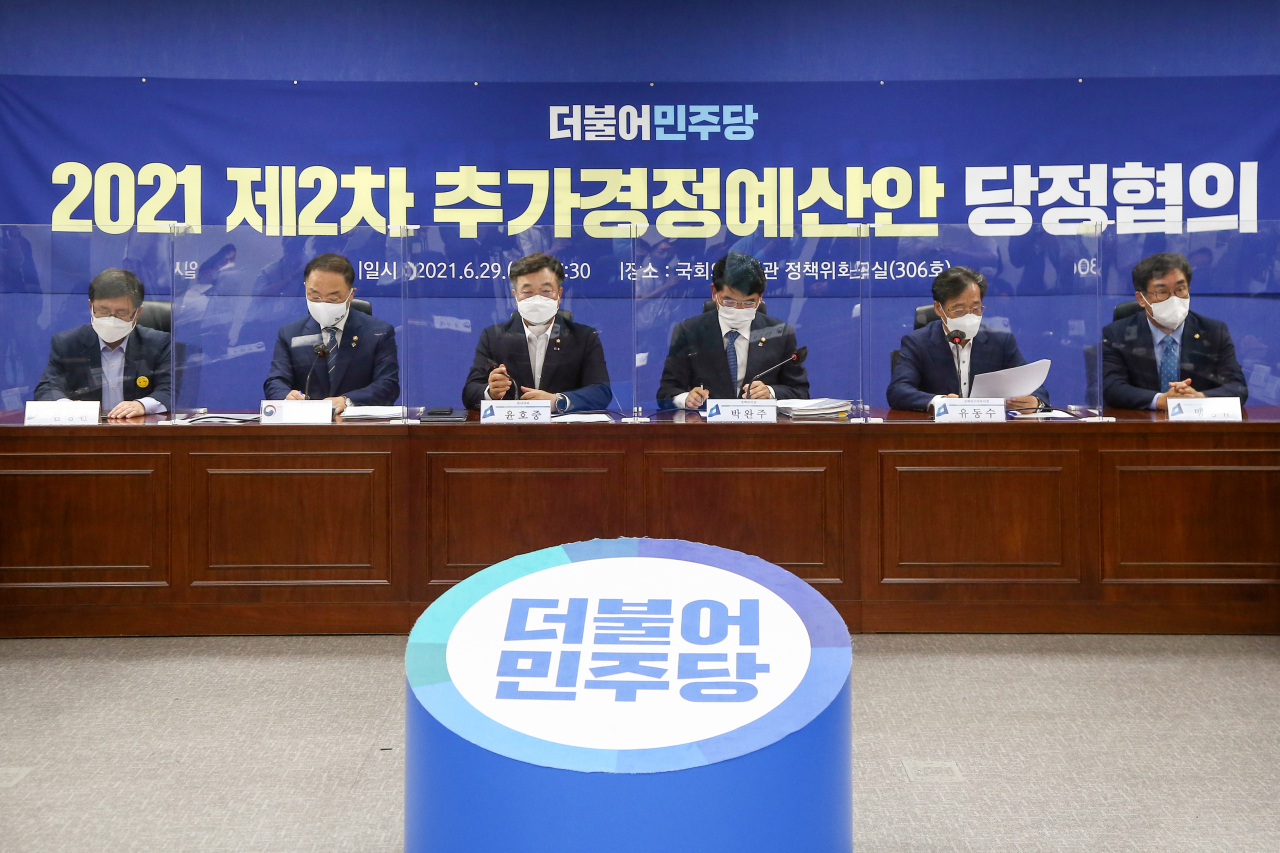 The ruling Democratic Party lawmakers brief reporters on the second extra budget for this year at the National Assembly in western Seoul on Tuesday. (Yonhap)
South Korea plans to allocate 33 trillion won ($29.2 billion) for its second round of COVID-19 supplementary budget this year, the ruling party and the government said Tuesday, amid growing concerns over the nation’s fast-growing national debt.

Since last year, the country has drawn up five rounds of COVID-19 extra budgets amounting to 82 trillion won with the latest and sixth addition pushing the number over the 100 trillion won-mark.

Ultimately, the total second extra budget is set to amount to some 36 trillion won, with an additional 3 trillion won to be reallocated from this year’s existing budget, the Democratic Party of Korea policy committee chief Rep. Park Wan-joo said, after the government-ruling party meeting.

“The four pillars of the latest extra budget are financial assistance towards damages from the pandemic, vaccination and disease prevention, hiring and public safety and revitalization of the local and regional economies,” Park explained.

The government has no plans to issue further Treasury bonds for the latest move, and some 2 trillion won will be used to repay debts, he added.

Of the total, some 16 trillion won has been earmarked for a sub-relief package for the public and small businesses, which will include the latest cash handout program for the bottom 80 percent income bracket. The program will mark the fifth of its kind since the outbreak of the COVID-19 pandemic here early last year.

Park hinted that the “bottom 80 percent income bracket” would be determined on the same calculations used to group beneficiaries of the national health insurance. “Households in the top 20 percent income bracket determined through the national health insurance system earn an annual income of some 100 million won each,” Park said. “Though the exact number has yet to be determined, some 4.4 million households are not subject to the cash subsidy program.”

Some 3 million in the lower income brackets living off basic income or those who are members of single-parent families will receive additional benefits.

Those in the bottom income bracket will receive the cash subsidy, while those “in the higher brackets with more purchasing powers” are to benefit from a credit card cash-back reward program worth a total 1 trillion won, according to Park.

The aid package also includes comprehensive assistance payments to small businesses hit hard by the country‘s antivirus measures, such as forced business restrictions. More than 1 million small businesses are expected to take advantage of the assistance.

Some 5 trillion won has been separately set aside for the nation’s vaccination drive and other disease prevention measures, while 3 trillion won will be funneled into the job market.

The drafting of the second supplementary budget is slated to be finalized and submitted to the National Assembly for approval within this week.

The latest extra budget allocation is projected to place further burden on Asia’s fourth-largest economy’s national debt, which has been growing at a rate of 3 million won per second and stands at 17.6 million won per person, the National Assembly Budget Office’s real time national debt clock showed earlier this month.

The total debt by Korea’s central and provincial governments hit 912.5 trillion won as of June 12, after snowballing to a record high of 846.9 trillion won last year, buoyed by the government’s four rounds of extra budgets throughout 2020.