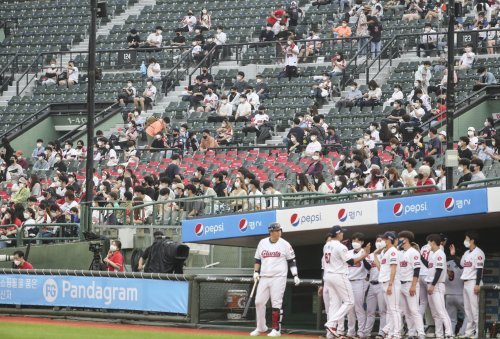 In this file photo from June 18, 2021, fans attend a Korea Baseball Organization regular season game between the home team Lotte Giants and the Samsung Lions at Sajik Stadium in Busan, 450 kilometers southeast of Seoul. (Yonhap)
Members of two South Korean baseball clubs have tested positive for the novel coronavirus, industry sources said Tuesday, though the season will proceed as usual after the rest of their teams all tested negative.

According to the sources, one scout from a Korea Baseball Organization (KBO) team in the greater Seoul region tested positive for COVID-19 early Monday. Later Monday, a coach for another team in greater Seoul also got infected with COVID-19, forcing the rest of his team to be tested.

Monday is the designated off day in the KBO. All 10 clubs are scheduled to be back in action Tuesday.

The team with an infected coach announced Tuesday morning that its players, coaches and officials all tested negative for the virus. An epidemiological study is still ongoing to determine if there have been any close contacts.

Then Tuesday afternoon, the other club announced all of its players, coaches and staff tested negative. They had to wait for test results before going on a road trip.

Under KBO's COVID-19 protocols, players or officials who test positive or who are listed as close contacts must be quarantined.

Before the start of the season, the KBO said it would not halt the season based on a small number of positive cases on teams, and that it would allow such teams to expand their rosters temporarily to fill any resulting holes and keep the season going.

However, in case of a mass infection that leaves a club severely shorthanded, then the league will convene an emergency board meeting to discuss a potential stoppage of play for up to three weeks -- two weeks of quarantine, followed by one week of practice for clubs. (Yonhap)