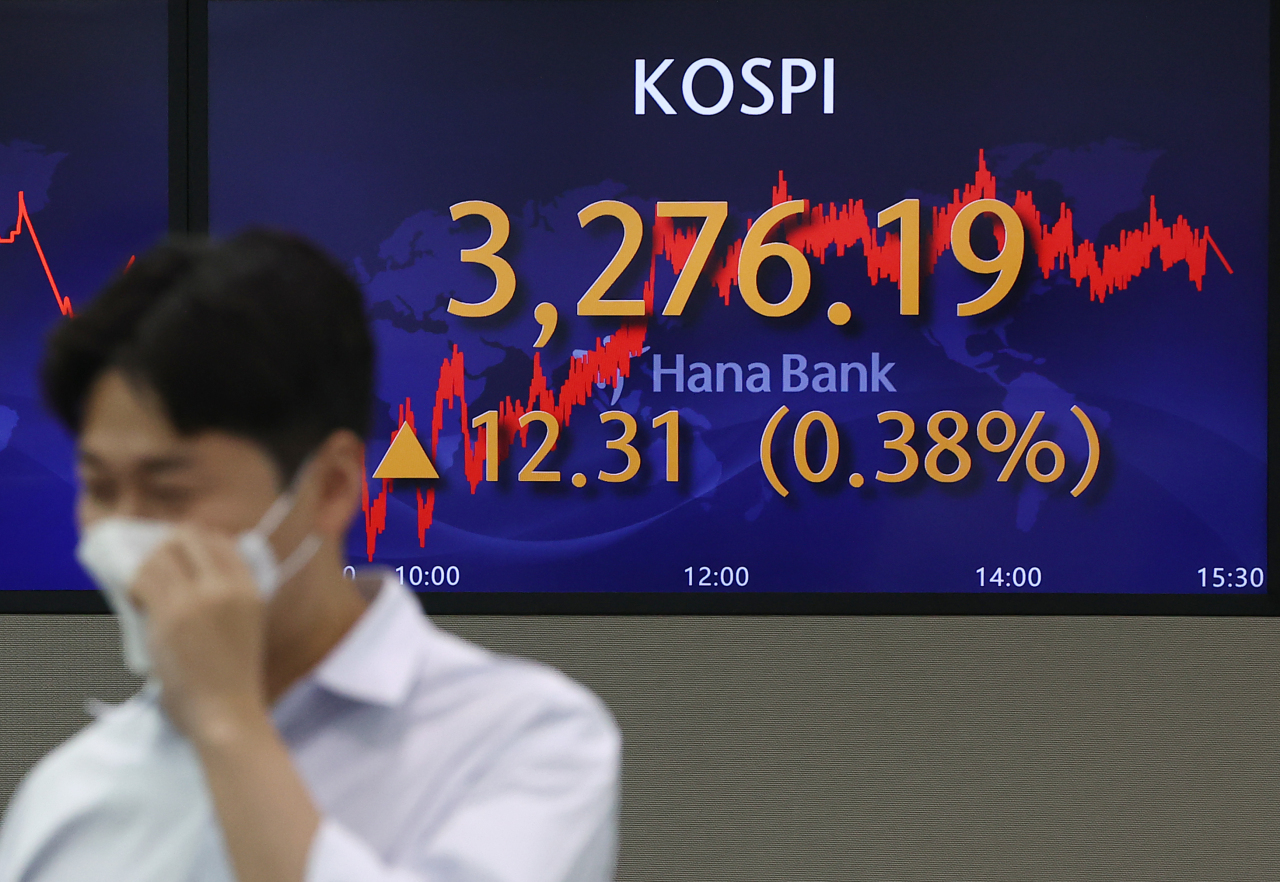 An electronic signboard at the trading room of Hana Bank in Seoul shows the benchmark Kospi closed 0.38 percent higher at 3,276.19 points Wednesday. (Yonhap)
Amid continued rallies and a series of blockbuster initial public offerings, the value of South Korea’s stock market is anticipated to reach 3,000 trillion won ($2.65 trillion) soon, raising hope for the market’s advancement on par with other global players.

According to Korea Exchange, the combined valuation of the local stock market stood at 2,719 trillion won -- 2,294 trillion won worth of main bourse Kospi market and 425 trillion won worth of tech-heavy Kosdaq market -- as of Wednesday’s market close. Compared with the end of December last year, the market size has surged by 15 percent on hopes of economic recovery and a high liquidity supply.

The local stock market cap surpassed the 1,000 trillion-won mark for the first time in July 2007. It took more than 13 years for the market to exceed the 2,000 trillion won in September last year, the KRX data showed.

On road to size up to the 3,000 trillion-won mark, the local stock market has enlarged its size this year, becoming the eighth-largest marketplace in terms of listed stocks’ values. Both Kospi and Kosdaq markets also logged new records, opening the era of 3,000 points and 1,000 points, respectively.

Including vaccine developer SK Bioscience and battery materials maker SK ie technology, some companies’ blockbuster market debuts on the main board in the first half also increased the size, as their market caps each hit at least 10 trillion won.

With expectations of further stock price increases and a record performance in the domestic IPO market, mega-sized deals totaling approximately 200 trillion won in the latter half, it is possible the stock market will reach a total valuation of 3,000 trillion won in the near future, they expected.

Krafton, the company behind popular shooting game PlayerUnknown’s Battlegrounds, is scheduled to go public next month. While the game developer is looking to raise up to a record 5.6 trillion won through the upcoming IPO, market watchers estimate the firm’s valuation around 20-30 trillion won so far.

“Most firms that have so far submitted applications for preliminary listing approval to the KRX are highly likely expected to go public within this year. With a parade of upcoming mega deals, we are looking forward to see not only the heated attention in the domestic IPO market but also the stock market’s further growth,” said Na Seung-doo, an analyst at SK Securities.