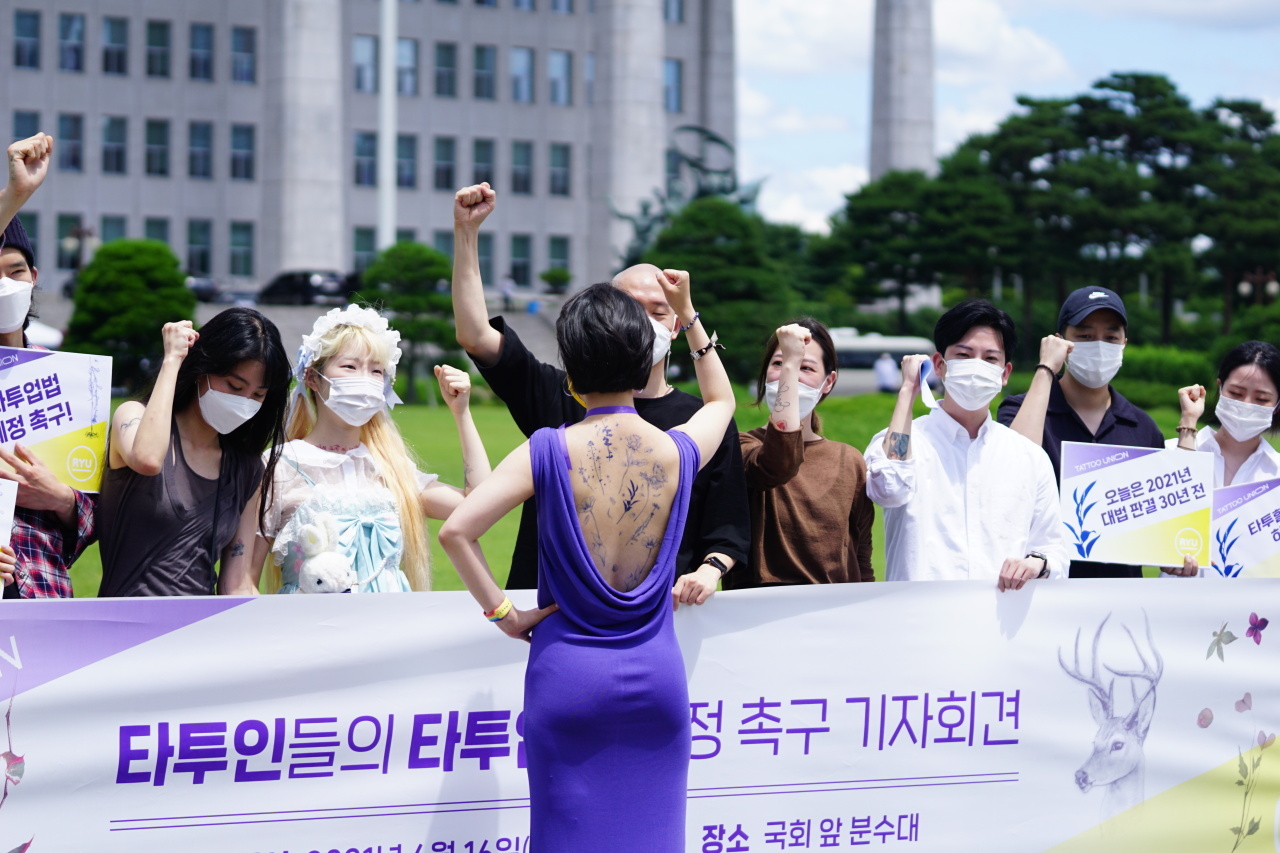 Rep. Ryu Ho-jeong (center) of the minor Justice Party shouts out slogans during a press conference held at the National Assembly to demand changes to “outdated” laws on tattoos. Ryu wore a purple backless dress to show off her temporary body art as a means to show her support for tattooing as an acceptable form of expression. (Office of Rep. Ryu Ho-jeong/Yonhap)


1. Pro-tattoo activists challenge “outdated” tattoo laws
-Medical license should not be required for tattooing, they say

[1] Being tattooed has long been negatively viewed in Korea. Tattoos were once associated with criminals and mobsters, and it was common for those with visible tattoos to be looked down upon and discriminated against in public spaces.

[2] But with the growing number of tattoo artists and tattoo recipients in recent years, discussions about whether to ease limits on tattooing have grown, along with the political will to bring about regulatory changes. A number of lawmakers have proposed bills similar to Ryu’s from as early as 2007, but all of them expired.

[3] The issue also gained steam earlier this month when images circulated of BTS member Jungkook appearing on national television with bandages covering the tattoos on his hands and arms. The Korea Communications Standards Commission prohibits showing tattoos on TV.

[4] Doctors have consistently voiced opposition to pro-tattoo laws, saying that allowing laypeople to administer tattoos would risk public health and fail to protect those with adverse symptoms after getting tattoos.

[1] Stocks gifted to members of boy band BTS have snowballed to a combined value of nearly 150 billion won ($132.5 million) over the course of about 10 months.

[2] The gift -- 478,695 common shares of BTS’ management agency Hybe that were evenly distributed to the seven members -- is now valued at the domestic stock market at 149.8 billion won, as Hybe shares notched an all-time high for five straight trading days until Friday.

[3] Among those under the age of 30 in Korea, all seven members ranked 43rd in a list of the richest people by stocks owned, according to an estimate by market tracker FnGuide.

4] Hybe founder and CEO Bang Si-hyuk gave the stocks to its prized boy band a month before the company went public. Hybe, then known as Big Hit Entertainment, said the gift was a token of the long-term partnership between the company and the artists.