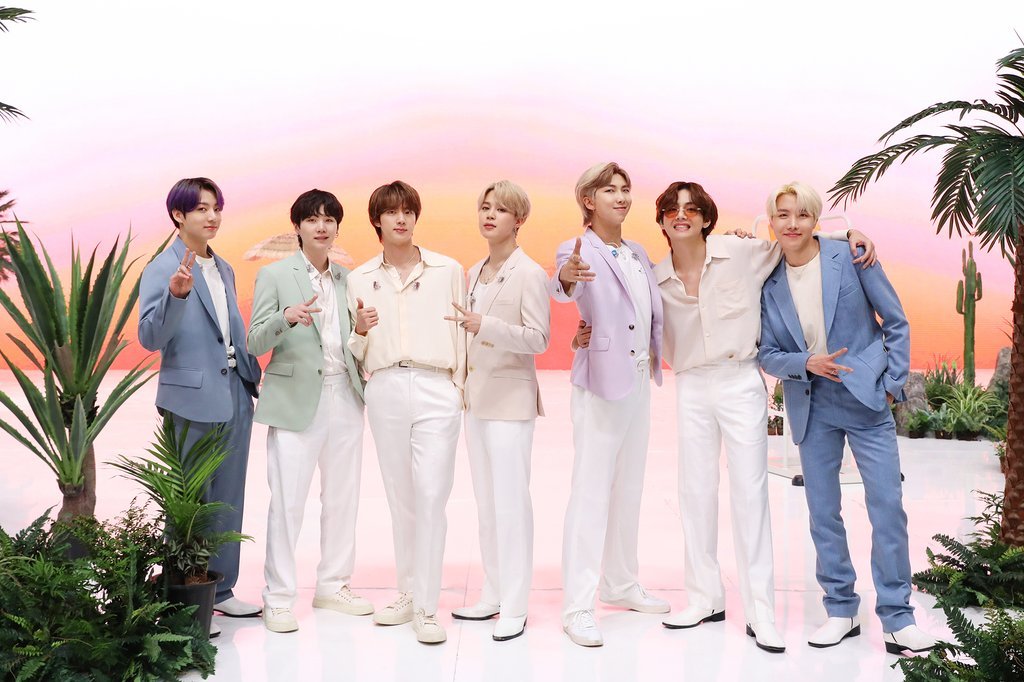 K-pop supergroup BTS performs on "Good Morning America," a popular program on the US broadcaster ABC News, on May 28, 2021, in this photo provided by Big Hit Music the following day. (Big Hit Music)
BTS' latest megahit dance-pop song "Butter" retained the No. 1 position on the Billboard's main albums chart for the fourth consecutive week in the group's best record on the chart since its debut.

"Butter" is officially No. 1 on this week's Hot 100 chart for a fourth consecutive week. It becomes the group's longest-leading No. 1 hit, surpassing the three-week run of "Dynamite."" Billboard said Monday (U.S. time) on its Twitter account.

The Billboard noted that "Butter" is the 13th single among 54 songs that debuted at No. 1 in its chart history to spend at least the first four weeks at the top spot. It marks the first such record by a group since 1998, when American rock band Aerosmith set the record with "I Don't Want to Miss a Thing."

On a regional level, BTS became the first Asian artist to hit No. 1 for four straight weeks. Previously, Japanese singer Kyu Sakamoto held the title with "Sukiyaki" in 1963.

The seven-piece act now has nine Billboard Hot 100 No. 1 records. "Butter" leads the list with four times at No. 1, followed by "Dynamite" with three, as well as "Life Goes On" and "Savage Love (Laxed - Siren Beat)" with one each.

Last month, BTS became the "first group with a trio of No. 1 entrances" with its songs "Dynamite," "Life Goes On" and "Butter."

BTS has been refreshing its list of accolades after becoming the first Korean act to debut at No. 1 on the Hot 100 with "Dynamite" in 2020. The group's first English language single also earned its first Grammy nomination.

Later in the year, "Life Goes On," the main track for its album "BE," became the first song predominantly sung in Korean to debut at the top spot on the main singles chart.

When including the group's overall No. 1 songs on the Billboard Hot 100, "Butter" is the fourth song to sit atop the main singles chart.

In addition to "Dynamite" and "Life Goes On," the group also featured in a remix version of "Savage Love (Laxed - Siren Beat)" by Jawsh 687 and Jason Derulo, which ranked No. 1 in October last year.

"Butter," released on May 21, is a vibrant summer number that the group hoped would give off good energy during the global coronavirus pandemic.

Upon its release, it topped iTunes top songs charts in more than 100 regions, as well as music charts in South Korea and Japan, a day after its release.

On YouTube and Spotify, the world's biggest platforms, "Butter" earned 20.9 million streams on its first day of release, marking the most streams in a single day in Spotify's history.

The English-language single also racked up 108.2 million views on YouTube in its first 24 hours of release, outnumbering "Dynamite" at 101.1 million views.

BTS thanked the group's powerful fan base -- known as Army -- for the four-week winning spree.

"Unbelievable! #BTS_Butter is on the top of the chart four weeks in a row! Thanks soooo-much #BTSARMY," the group tweeted on its official account. (Yonhap)