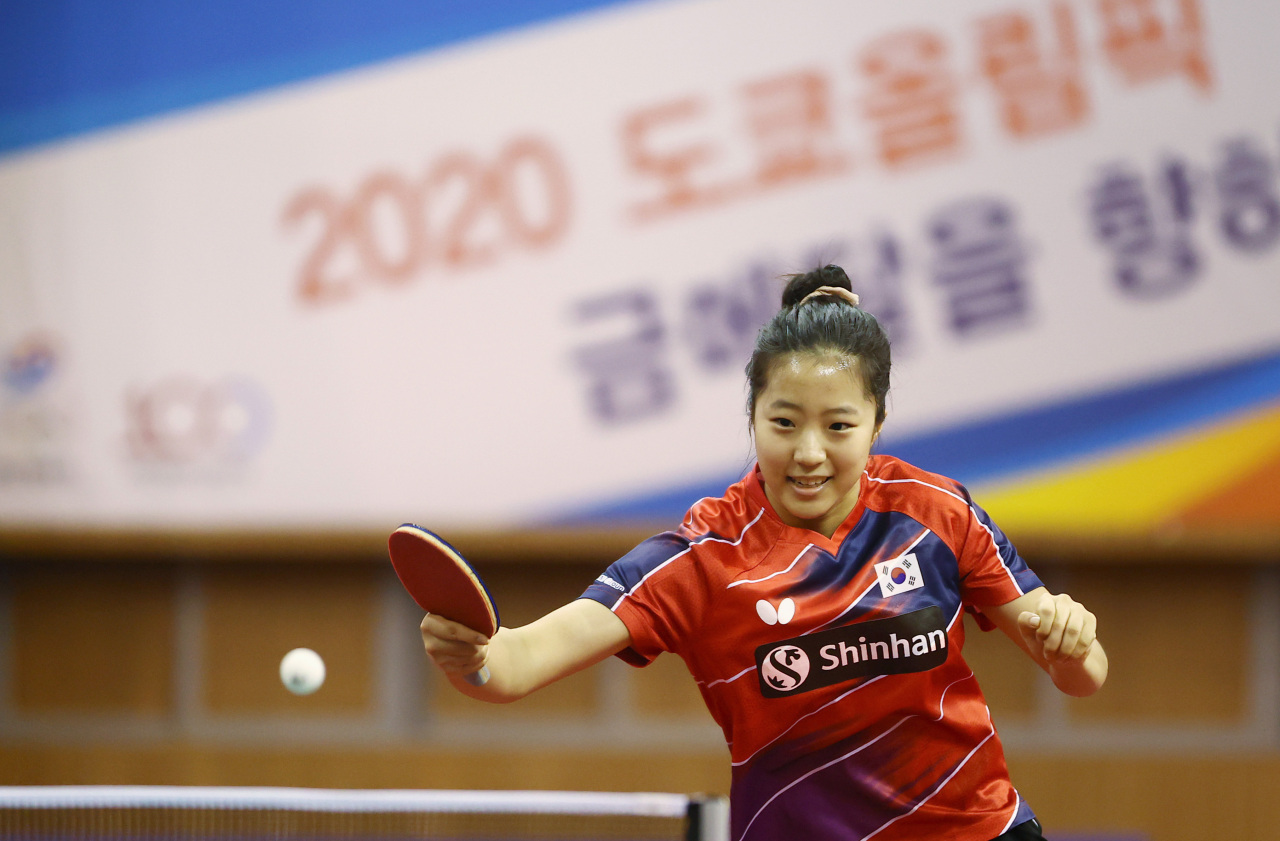 In this file photo from June 2, 2021, South Korean table tennis player Shin Yu-bin practices at the Jincheon National Training Center in Jincheon, 90 kilometers south of Seoul. (Yonhap)
MUNGYEONG -- Watch the South Korean teen phenom Shin Yu-bin play table tennis, and you can imagine that she must listen to music with beats as dynamic as her strokes.

Shin, two weeks from her 17th birthday and the youngest member of the national team for the Tokyo Olympics, is a proud member of BTS Army, the global fan base for the K-pop sensation. With the Olympics about a month away, Shin, who carries photos of BTS members in her backpack, said she already has set her BTS playlist for Tokyo.

"When I am down on myself, I play 'Dope' and it makes me feel great about myself and helps me relax," Shin told reporters Monday before an Olympic prep event in the southeastern city of Mungyeong. "I want to be dope for fans at the Olympics."

The precocious talent made her first national team at just 14, and won the Olympic trials earlier this year to become the youngest South Korean Olympian ever.

Shin is joined on the team by veterans who have been in the Olympic cauldron, including fellow women's singles player Jeon Ji-hee and the male players Lee Sang-su and Jeoung Young-sik.

"They've told me they were so nervous at their first Olympics that they wished someone would come and rescue them," Shin said. "I am only thinking about trying to win a medal."

Shin then added with a smile, "I am thinking that probably because I haven't been to the Olympics yet."

South Korea will face an uphill battle to the podium. China is the dominant force in the sport, and Japan has made strides, too.

South Korea's stated objective is to win a medal in the women's team event, and any medal by either Shin or Jeon will be considered gravy.

"Even though this will be my first Olympics, I want to win a medal while I am at it," Shin said. "I really want to go for it." (Yonhap)