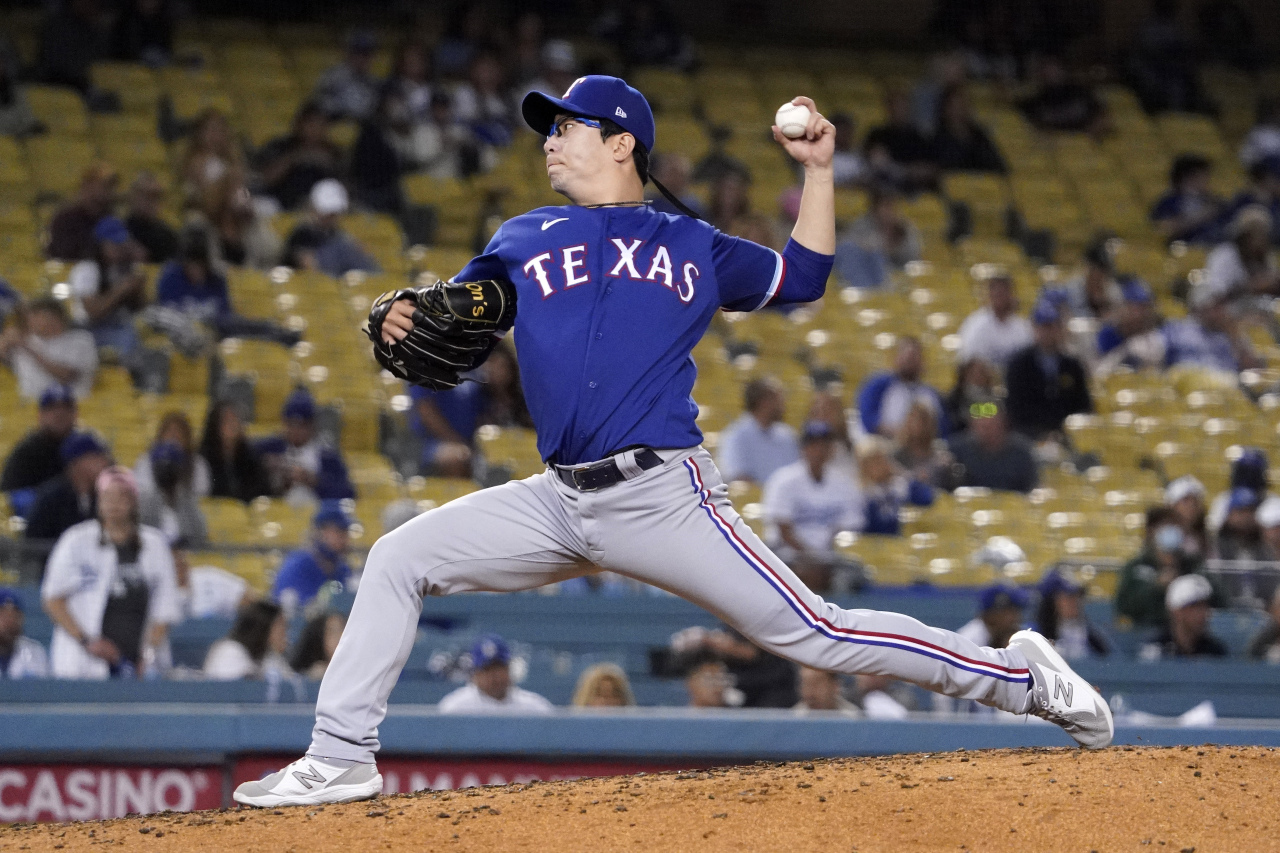 In this Associated Press photo from June 11, 2021, Yang Hyeon-jong of the Texas Rangers pitches against the Los Angeles Dodgers during the bottom of the fourth inning of a Major League Baseball regular season game at Dodger Stadium in Los Angeles. (Yonhap)
The Texas Rangers have designated their South Korean pitcher Yang Hyeon-jong for assignment, putting the left-hander's future in the majors in further doubt.

The Rangers announced the move Thursday (US local time), one day after optioning Yang to their Triple-A affiliate, Round Rock Express.

When a player is designated for assignment, he is immediately removed from the 40-man roster and from the 25-man active roster if on it. The player must be traded, released or placed on irrevocable waivers within seven days.

The Rangers first sent Yang to the minors to make room for closer Ian Kennedy, who came off the injured list Wednesday. Manager Chris Woodward said at the time the team wanted Yang to get more reps in Triple-A before returning to the big leagues.

After 14 seasons with the Kia Tigers in the Korea Baseball Organization (KBO), Yang signed a one-year minor league deal with the Rangers in February, worth US$1.3 million. He had an invitation to spring training but didn't break camp with the Rangers, only earning his first callup in April.

Yang, 33, bounced between the bullpen and the rotation without ever finding his footing. In eight appearances, including four starts, Yang went 0-3 with a 5.59 ERA in 29 innings. He struck out 19 and walked 15.

In place of injured starter Kohei Arihara, Yang made his first start in early May and then got three consecutive starts later that month. But he failed to capitalize on that opportunity to stick around, losing his last three starts in May before being sent back to the bullpen. Yang went a dozen days between his last start and his next bullpen appearance.

Yang was the regular season and the Korean Series MVP in the KBO in 2017, and was one of the most consistent starters here for the better part of the last decade.

Yang first tried to reach the majors in 2014 through the posting process, and the Rangers put in a bid for the pitcher during the silent auction. The Tigers pulled him back from the market, and Yang would pitch six more years in the KBO.

In 2020, Yang was 11-10 with a 4.70 ERA, his worst mark as a full-time starter. But Yang also threw 172 1/3 innings, further cementing his reputation as the KBO's premier workhorse with his seventh consecutive season of at least 170 innings pitched. (Yonhap)