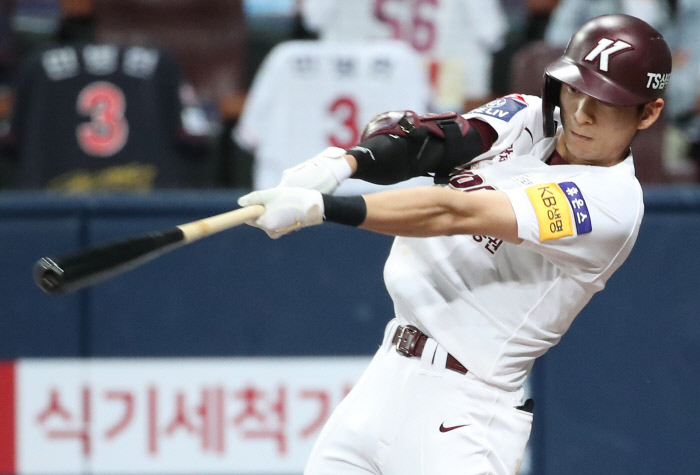 In this file photo from June 3, 2021, Lee Jung-hoo of the Kiwoom Heroes hits an RBI single against the Lotte Giants in the bottom of the fourth inning of a Korea Baseball Organization regular season game at Gocheok Sky Dome in Seoul. (Yonhap)
More than a decade after helping South Korea to an improbable Olympic baseball gold medal, former major league outfielder Kim Hyun-soo will try to do it again.

Baseball will return to the Olympics for the July 23-Aug. 8 competition in the Japanese capital, after being left off in the past two competitions. It was last contested in Beijing in 2008, and Kim was the youngest South Korean player then at 20 as South Korea captured the gold with a perfect 9-0 record.

The national team will have the same manager from 2008, Kim Kyung-moon, in charge once again.

Kim Hyun-soo, captain of the LG Twins, will be one of four outfielders. He is having his typically productive offensive season, batting .316/.402/.476 with eight home runs and 33 RBIs in 57 games.

Joining Kim in the outfield is Lee Jung-hoo of the Kiwoom Heroes, a potential future big leaguer.

Hwang, also 33, had a cup of coffee with the San Francisco Giants in 2017, appearing in 18 games and batting .154. He has been a far more productive player in the KBO and currently mans the hot corner for the first-place KT Wiz.

Hwang is batting .318/.409/.427 with two homers and 14 RBIs in 28 games. He missed over a month with a broken nose after taking a grounder to the face in an April game. Hwang hit at least 20 homers in each of his past five KBO seasons.

Hwang's Wiz teammate, Kang Baek-ho, is the youngest position player on the team at 21. He's tearing up KBO pitching this year with a league-best .409 batting average and 85 hits. Kang also leads the league in on-base percentage with .482 and has the second-highest on-base plus slugging percentage (OPS) with 1.055.

NC Dinos catcher Yang Eui-ji, who leads the league in OPS with 1.076 and slugging percentage with .611, was a no-brainer choice as the No. 1 backstop. The perennial MVP candidate also has the most RBIs with 49, but Yang also earns his money with his defense and game-calling abilities.

Kang Min-ho of the Samsung Lions will be the backup. The 35-year-old is the other carryover from the 2008 Olympic team and will be the elder statesman in Tokyo.

Youth will be served on the mound, with the 20-year-old Kia Tigers rookie Lee Eui-lee being name as one of two left-handers. The young fireballer is 2-2 with a 4.50 ERA in 10 starts this year.

Among notable absences, former major league All-Star Choo Shin-soo was left off the team, along with one-time St. Louis Cardinals closer Oh Seung-hwan. Both will turn 39 next month.

Oh leads the KBO with 20 saves this year, and the Samsung Lions' icon is the KBO's career saves leader with 315 and counting.

Manager Kim said he considered players' current form above all else while also taking into account the overall balance of the roster.

"It's not going to be an easy tournament, but we'll put our national pride on the line," Kim said. "Our people have been going through so much with the pandemic, and we want to give them something to cheer about."

The KBO will go on an Olympic break from July 19 to Aug. 9. The national team camp will open on July 19 at Gocheok Sky Dome in Seoul. The national team will play an exhibition game against an under-24 KBO All-Star team on July 23 and will likely schedule more practice games before departing for Japan.

Below is the complete list of the team, with players' club affiliations in parentheses.