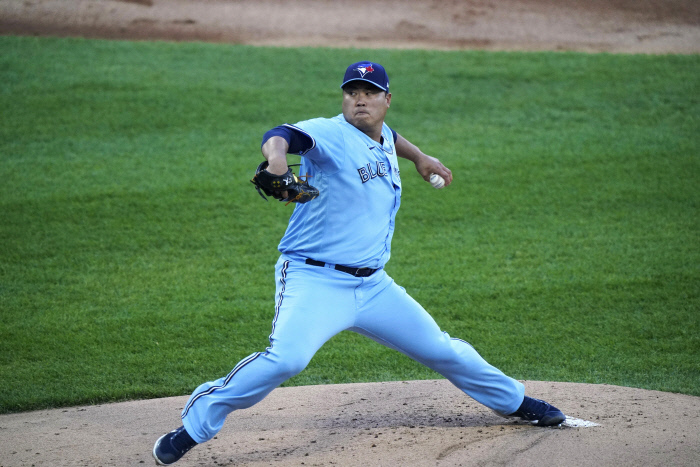 In this Associated Press photo, Ryu Hyun-jin of the Toronto Blue Jays pitches against the Chicago White Sox during the bottom of the first inning of a Major League Baseball regular season game at Guaranteed Rate Field in Chicago last Thursday. (AP-Yonhap)
Can second time be the charm?

For the second time this season, Ryu Hyun-jin of the Toronto Blue Jays and Kim Kwang-hyun of the St. Louis Cardinals will start on the same day in the majors -- Tuesday evening in America and Wednesday morning in their native land.

Ryu and the Jays will host the New York Yankees at Sahlen Field in Buffalo, New York, at 7:07 p.m. Tuesday local time, or 8:07 a.m. Wednesday in Seoul.

Kim and the Cardinals will bring home the Miami Marlins at Busch Stadium at 7:15 p.m. Tuesday in St. Louis, or 9:15 a.m. in South Korea. It will be Kim's first start back from the injured list, where he spent the past 10 days with lower back tightness.

The two left-handers also toed the rubber on June 4, and both of them suffered losses then.

Ryu surrendered a season-worst seven runs in 5 2/3 innings against the Houston Astros in a 13-1 loss. Ryu was touched for a season-high two home runs and issued three walks, more than any other start in 2021.

Kim exited his start against the Cincinnati Reds before the start of the fourth inning with a back injury, with the Cardinals trailing 3-0 after a pair of home runs served up by Kim. They dropped the game 6-4 and Kim was saddled with his fourth consecutive loss.

Kim suffered the injury after trying to beat out a groundball in his at-bat in the bottom of the third inning. Kim had also missed time at the start of the season with the same back issues.

Ryu lost his next start against the Chicago White Sox last Thursday, when he allowed three runs in six innings. All of those runs were scored in the first inning, as Ryu held the White Sox to just two singles over the next five frames. He got little support from his lineup as the Jays lost 5-2 and Ryu dropped to 5-4 with a 3.34 ERA. He has now lost consecutive starts for the first time as a Blue Jay.

At 33-30 prior to Monday's game, the Blue Jays were third in the competitive American League East division, 7.5 games behind the division-leading Tampa Bay Rays.

In St. Louis, Kim will face the Marlins for the first time in his career. The Marlins have struggled against left-handed pitching, and they're 13th among 15 National League clubs with a .678 on-base plus slugging percentage (OPS) versus lefties.

The reeling Cardinals were 32-33 before Monday's action, fourth in the National League Central and six games behind the co-leaders, Chicago Cubs and Milwaukee Brewers. The Cardinals were in first place on May 30 with a record of 30-23.

Last year, Ryu and Kim started on the same day four times during the regular season and once in the posteason, and both won their final regular season starts on Sept. 24. (Yonhap)