During a plenary session on health during a Group of Seven summit, Moon vowed to offer $100 million in grants this year, according to a statement from the presidential office.

Another $100 million will be provided next year through the COVAX Advance Market Commitment, a financing framework established to make COVID-19 vaccines affordable in more than 90 developing countries.

The remarks were made during Moon’s visit to Britain for this year’s G-7 summit, which started Friday. Moon was invited to attend the summit as a guest alongside his counterparts from Australia, India and South Africa.

The presidential office said the commitment would spur Korea’s role as a global vaccine hub while it seeks partnerships with the G-7 nations. 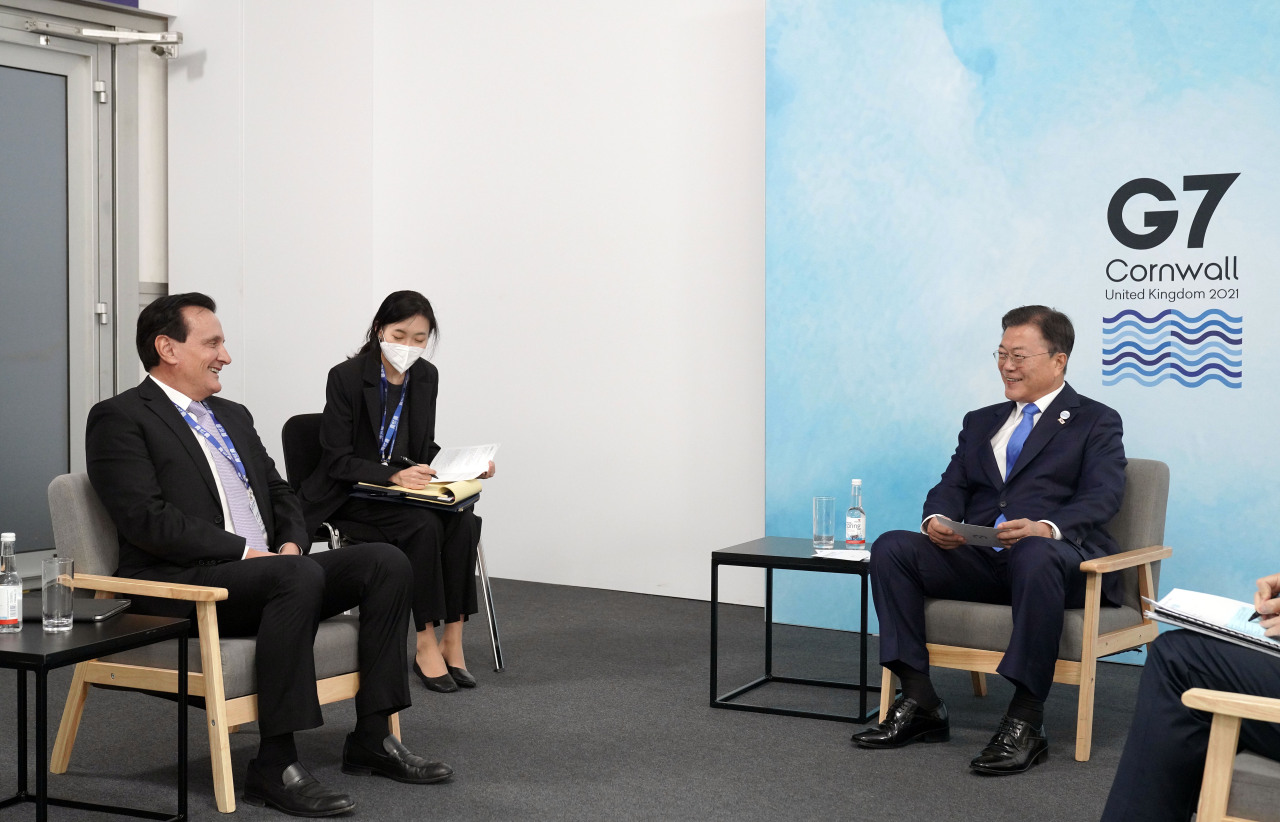 South Korean President Moon Jae-in (right) speaks Saturday with Pascal Soriot (right), executive director and CEO of AstraZeneca, during this year`s G-7 summit held in Cornwall, Britain. (Yonhap)
During his visit Moon also met with Pascal Soriot, executive director and CEO of the Britain-based AstraZeneca, to reaffirm the importance of continued cooperation in the global production and supplying of COVID-19 vaccines.

In the 27-minute meeting, Moon pledged to actively cooperate with the international community to ensure that enough COVID-19 vaccines are provided globally, according to the presidential office.

Cheong Wae Dae said Moon thanked Soriot for his company’s active role in the COVID-19 situation, saying its vaccine was an important part of Korea’s vaccination campaign, which kicked off in February. Korea aims to complete the vaccination of 14 million people by the end of this month.

“AstraZeneca’s vaccine is unique for us in that it was the first (COVID-19) vaccine inoculated in South Korea and is the most used vaccine,” Moon was quoted as saying.

“Koreans could receive the vaccine with relief as it was produced locally with SK’s technology transfer. This has also played an important first step for Korea to become a global vaccine production hub.”

More than 60 percent of those who have received their first jabs here got the vaccine developed by the British pharmaceutical firm.

As of Saturday’s end, close to 8 million people in Korea had gotten their first COVID-19 shots from AstraZeneca and 3.26 million had gotten shots from Pfizer. SK Group subsidiary SK Bioscience produces AstraZeneca’s vaccine domestically through a contract manufacturing deal.

Moon also asked Soriot to provide continued support so as to ensure a steady supply of its vaccines for the latter half of the year, Moon’s office said.

The AstraZeneca CEO also expressed appreciation for Korea’s role in the COVAX program, as vaccines produced in the country have been provided to 75 nations within the coalition, the office added.