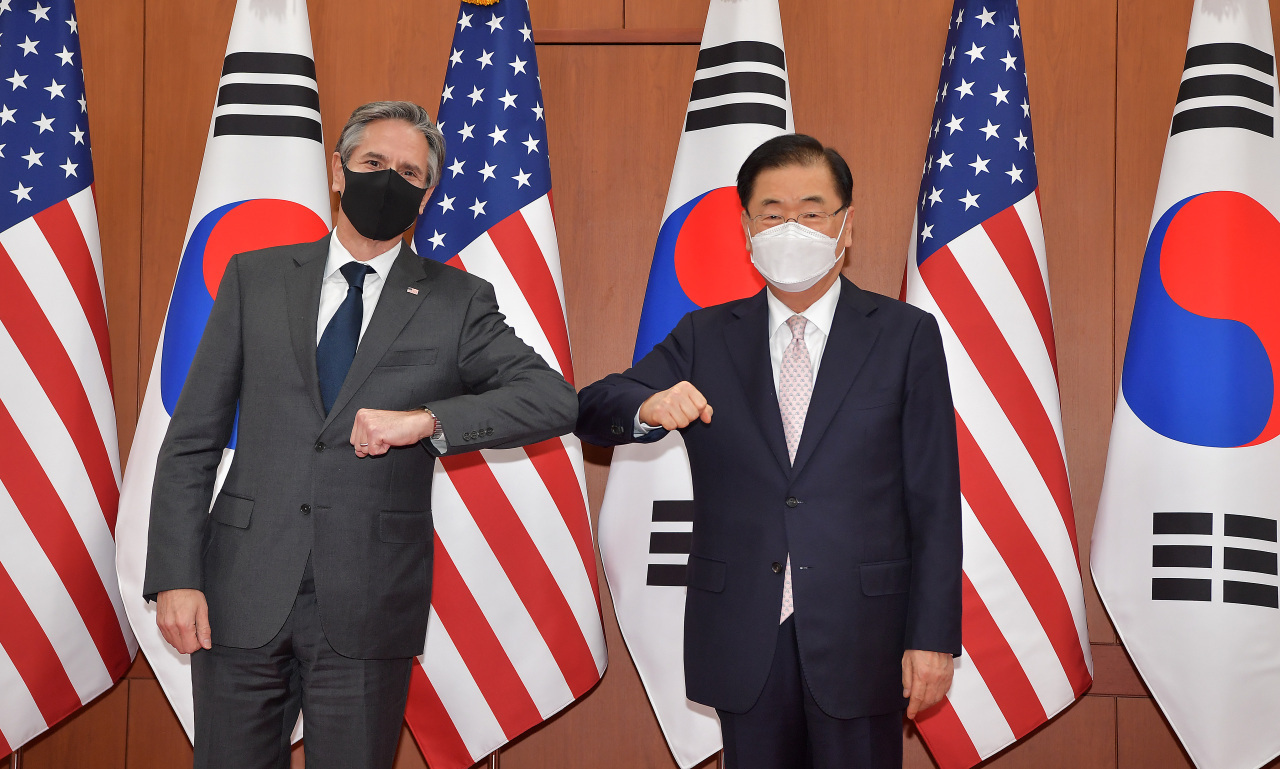 Foreign Minister Chung Eui-yong (right) and US Secretary of State Antony Blinken pose for the media before their meeting at the Foreign Ministry in Seoul on March 17, 2021. (Yonhap)
The top diplomats of South Korea and the United States have reaffirmed the goal of the complete denuclearization of the Korean Peninsula and agreed to deepen cooperation on vaccine distribution and Myanmar, the foreign ministry said Sunday.

Foreign Minister Chung Eui-yong and his US counterpart, Antony Blinken, held talks on the margins of the Group of Seven (G7) summit in Britain on Saturday to discuss an array of issues, including follow-up measures to last month' summit between Presidents Moon Jae-in and Joe Biden.

"The minister and secretary agreed to flesh out the outcome of the summit by faithfully implementing follow-up measures in various areas, including vaccines, cutting-edge technologies, supply chains and atomic energy," the ministry said in a press release.

"On the occasion of South Korea's participation in the G-7 summit, the ministers agreed to deepen cooperation on pending regional and global issues, including the Myanmar issue and vaccine distribution across the world," it added.

Chung and Blinken reaffirmed the goal of complete denuclearization and the establishment of lasting peace on the peninsula and agreed to closely cooperate to encourage North Korea's return to dialogue, the ministry said.

In addition, they reiterated the importance of their countries' trilateral cooperation with Japan.

In a separate press release, the State Department said that the two sides reaffirmed that the bilateral alliance is the "linchpin of peace, security, and prosperity in Northeast Asia, the Indo-Pacific region, and beyond."

"They stressed the importance of multilateral cooperation to address issues critical to regional stability, including the return to the path to democracy for the people of Burma," Ned Price, the spokesman for the State Department, said in the release.

Chung and Blinken were in Carbis Bay in Cornwall to accompany Presidents Moon and Biden, respectively, for the three-day G-7 session that opened Friday.

South Korea is not part of the club of wealthy nations but has been invited as a guest, along with Australia, India and South Africa. (Yonhap)