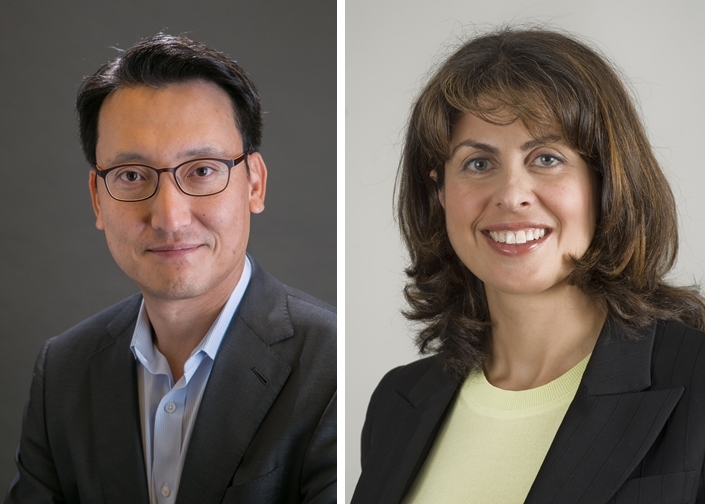 Hayoung Lee (left) and Rana Karadsheh (IFC)
PET, or polyethylene terephthalate, is the inexpensive, versatile plastic used to make bottles, food containers and other modern conveniences. Even though PET is a highly valuable and readily recyclable material, there is not enough waste collection and recycling capacity in many countries in South and Southeast Asia. PET and other plastics stay in the environment for hundreds of years, and when exposed to sunlight and seawater, they fragment into microplastics that are consumed by marine life and eventually make their way into the food chain with unknown health impacts.

More robust global recycling efforts would go a long way toward integrating the plastics value chain into a circular economy where waste is managed as a valuable resource and reclaimed, reprocessed and ultimately used as feedstock for new plastic products. That would help the environment in several ways. First, it would mean less fossil fuel feedstock would be used to make virgin plastic that would significantly reduce greenhouse gas emissions. But more importantly, less discarded plastic would pile up. Important progress has already been made along those lines, but much more is needed if the world is going to reduce the up to 13 million tons of plastic every year that leak into the oceans.

The biggest challenge is modernizing and rationalizing waste collection and processing systems. Right now, collection and segregation of recyclables is very fragmented and underdeveloped in many emerging economies -- informal waste pickers scour junkyards and landfills for sellable recyclables, often operating outside of municipal solid waste management systems. Estimates vary greatly, but globally at least 250 million metric tons of plastic waste is generated annually and only about 14 percent gets recycled.

Even in developed countries like Korea, collection can be uneven and recycling expensive. South Korea recycles more than 50 percent of its overall waste, which is one of the highest rates in the world, but the country also has the highest rate of plastic consumption per capita. Given the high rate of plastic consumption, the government has set an ambitious target of reducing its plastic waste by half by 2030 while doubling its average recycling rate from 34 percent to 70 percent. For PET alone, Korea’s consumption was around 300,000 tons in 2019, of which 245,000 tons of used bottles were sorted and collected.

The paradox is that plastic waste has significant material value that is currently not being fully tapped when plastics are disposed via landfill or incineration, or downcycled. This represents a lost business opportunity for the private sector especially, since demand for recycled plastic is increasing globally for food and beverage applications. Plastic manufacturers and global brands, spurred by environmentally conscious consumers and government regulations, are helping create a new market for recycled materials. Many consumer goods companies such as Coca-Cola and Danone and retailers such as Walmart have made public commitments to increase recycled plastic content in their packaging or products. In addition, the European Union has mandated a minimum 25 percent recycled content in PET bottles by 2025 and 30 percent by 2030 creating a strong enabling environment for recycled PET. In January, S&P Global Platts Analytics predicted that even though higher grades of recycled PET will cost around $150 per metric ton more than virgin PET in the medium term, many manufacturers are willing to pay the premium because the alternative is a tax of 800 euros per metric ton on unrecycled discarded plastic under a new plastics tax.

With its first ever blue loan exclusively focused on addressing global marine plastic pollution, a $225 million commitment to help Indorama Ventures expand its food-grade PET recycling capacity, IFC teamed up with one of the world’s biggest producers of virgin PET resins to address ocean pollution and accelerate efforts toward a more circular plastics industry where reusability and recyclability become commonplace.

Blue loans are an innovative financial instrument that is earmarked for ocean conservation projects. Commercially viable solutions, supported by such blue financing solutions, are particularly important given the magnitude of the problem, which cannot be addressed through public investments and socially driven initiatives alone.

The Thai-based multi-national has committed to quadrupling its PET recycling capacity and diverting 750,000 tons of plastic annually from landfills and open dumps and helping avoid leakage into waterways.

To put the effort into context, Indorama will recycle 50 billion PET bottles every year in Brazil, India, Indonesia, the Philippines and Thailand -- countries that are particularly vulnerable to ocean pollution because of their dense coastal populations and reliance on fishing and tourism. That effort alone is expected to save 3 million barrels of crude oil and eliminate 1.65 million tons of carbon pollution that would have gone into manufacturing new bottles. The IFC-led loan package with participation from Asian Development Bank and Deutsche Investitions-und Entwicklungsgesellschaft, complemented by a $75 million green loan to finance renewable energy and energy efficiency projects, will serve as a prototype to accelerate circular economy models while simultaneously encouraging the business case of building bottle-to-bottle capacities to other recyclers and PET bottle producers, leveraging their partnership with the brands and convening power in the market.

Korea has already stepped up regulations on single use plastics, including better labeling to facilitate more efficient waste segregation and recovery of clear PET bottles. However, more can be done to create a truly circular economy and a closed-loop recycling process. Korea can set an example for other countries in Asia by developing appropriate definitions, policies and standards for food-grade PET recycling with a view toward eventual harmonization across the region. As seen from the Indorama example, the business case for bottle-to-bottle PET recycling is already viable and the support of innovative financing solutions such as blue loans, can be used to promote further scaling up by the private sector. The South Korean government recently announced that it would promote the use of recycled PET in making food containers. Introducing such regulations to allow and encourage food grade bottle-to-bottle recycling using mechanical recycling technology, which is already allowed in other developed markets such as the United States, the European Union and Japan will support the Korean government’s ambitious targets of reducing plastic waste and driving a transition to a circular economy.

By Hayoung Lee and Rana Karadsheh

Hayoung Lee is a senior investment officer for manufacturing in Asia at the International Finance Corporation. Rana Karadsheh is the regional industry director for manufacturing, agribusiness and services in Asia Pacific at IFC. --Ed.