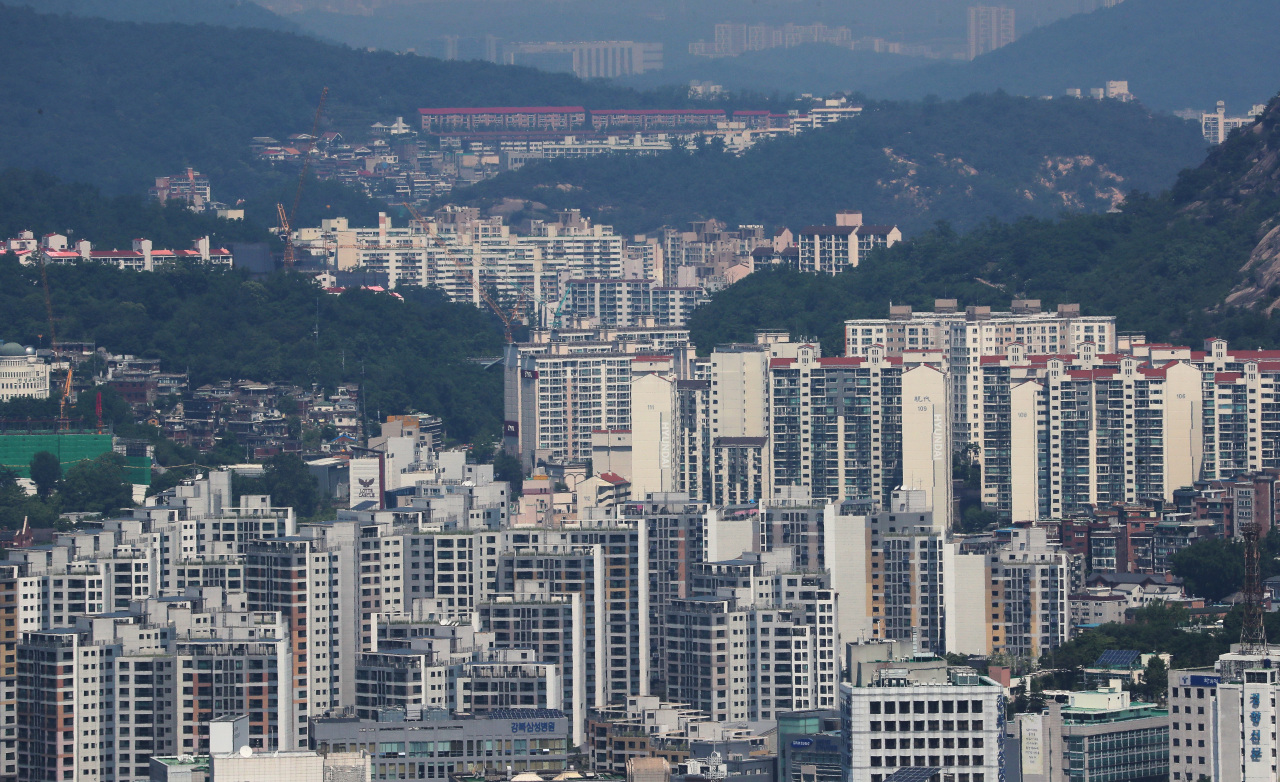 This photo shows apartment complexes, located in the north of Han River, in Seoul as of June 4. (Yonhap)
SEJONG -- The Moon Jae-in administration’s real estate policy has brought about social discord, as preferential treatment was effectively given to particular groups, irrespective of its initial policy intentions.

The groups who benefited include people with large cash holdings and young married couples in their 20s or 30s.

Though the government has not officially provided special favors for those with huge cash holdings in purchasing homes, property regulations including tight mortgage rules work in their favor.

Commercial banks are banned from issuing mortgages to people who seek to buy houses priced over 1.5 billion won ($1.3 million). This is an unprecedented real estate policy, unveiled by the government on Dec. 16, 2019.

It is not easy to find apartment complexes, whose unit price is less than 1.5 billion won, in Seoul’s Gangnam area - comprising Gangnam-gu, Seocho-gu and Songpa-gu. The average price of homes, including apartments, in some districts of the Gangnam area hovers around 2 billion won.

Under the total ban on bank mortgages, those with enough cash can benefit from “reduced competition” in applying for newly built apartment subscriptions or purchasing old apartments in the wealthy area.

Those with insufficient cash have no choice but to give up applying for the subscriptions, and yield the apartments to others.

The percentage increased by 4.8 percentage points from a year earlier amid a spike in Seoul home prices, which led more and more households to relocate to Gyeonggi Province from the capital.

Some online commenters likened the mortgage ban on apartments priced over 1.5 billion won to a “communist” policy, calling for the government to publicize similar regulations, if there are any, in developed countries.

Earlier, the incumbent administration introduced a housing benefit for newlyweds. Couples who have been married for less than seven years are favored in apartment subscriptions, regardless of whether they have children.

Public and private-sector constructors are respectively required to provide 30 and 20 percent, respectively, of newly built apartments to young married couples.

Amid intense competition for apartment subscription in Seoul, netizens say the preferential benefits for newlyweds, estimated to be mainly in their 20s and 30s, further fans competition among those in their 40s and 50s.

The online community highlighting that at least 2 in 5 households across the nation -- and 1 in 2 households residing in Seoul -- do not own homes.

An online commenter claimed that the government benefit “should be primarily offered to houseless people who have multiple children, regardless of age.”

As a conflict between age groups, another online commenter refuted the view, saying, “The houseless in their 40s and 50s are already incapable, despite the fact that they have had advantages with high scores compared to those in their 30s and 20s in past apartment subscriptions.”

Further, people were enraged by the news that many civil servants working at Government Complex Sejong were estimated to have reaped huge capital gains via preferred supply of apartments for civil servants in the administrative city over the past decade.

Last month, Cheong Wa Dae and the ruling Democratic Party of Korea announced a plan to scrap the special supply for civil servants, which was operated starting 2010.

But there are speculations that many civil servants had already taken gains up to 50-100 percent of the initial prices by trading the apartments. Without residing in the supplied apartments, some of them have commuted to the complex from Seoul, Gyeonggi Province or other non-Sejong areas.