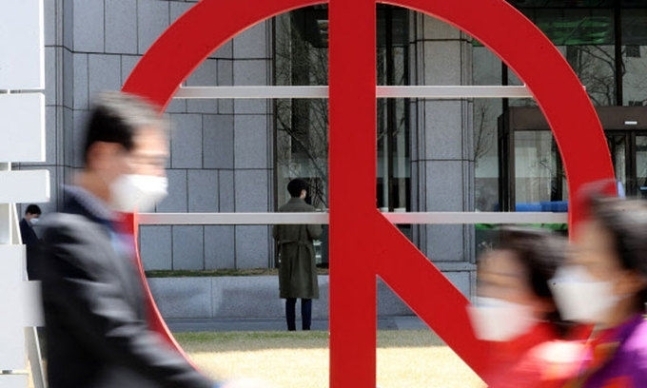 Pedestrians pass by a stamp sculpture installed in front of the Korea Press Center in Jung-gu, Seoul before the April 7 by-elections. (Yonhap)

1. Will Constitution be revised to allow young president?

[2] Under the current Constitution, a candidate must be over 40 years old to run for president. The clause was first introduced in 1962 during the fifth constitutional amendment led by the military regime. In order for the Constitution to be revised, the motion needs the support of more than two-thirds of the National Assembly, and to be approved in a referendum.

[3] Kang Min-jin, 26, the leader of the youth chapter of the liberal minor Justice Party, was the first politician to ignite the debate at the 21st National Assembly. Kang pointed out in a press briefing on May 30 that “All presidential candidates speak of ‘youth’ but none of them are youth.” She said, “The constitutional provisions that prohibit those under 40 from running for president are discrimination and unfair. The removal of the 40-year minimum age guarantees everyone the right to be president.”

[4] Public opinion on the need for a constitutional revision remains divided, according to a recent poll. Last week, polling agency Realmeter released survey results on revising the age limit for running for president. It contacted 9,421 people aged 18 or older nationwide, with about 500 responding. According to the result, 50.3 percent of respondents said they “agree” and 44.8 percent said they “disagree,” while 4.9 percent said they “don’t know.”

2. When Batman faces gangsters in Jongno

[1] The iconic superhero Batman will be created by a Korean writer and cartoonists, this time against the backdrop of Seoul. DC Comics is to publish a series set in 14 countries around the globe -- Korea, China, Japan, US, France, Spain, Italy, Germany, Czech Republic, Russia, Poland, Turkey, Mexico, and Brazil -- working with writers from the respective countries.

*against the backdrop of: ~을 배경으로 해서

[2] Spurred by the Dark Knight’s realization that his fight for justice should not be limited to Gotham city, the global collaboration series is the first of its kind for DC Comics since its founding in 1934. Throughout the localized anthology featuring Batman’s past and present, international voices are delivered by influential and talented writers.

[3] “Batman: Moonin,” is the title featuring Korea and takes place in Jongno-gu, central Seoul. The plot unfolds as “Moonin,” a device that reads and visualizes human memories, is stolen while in development by a Korean company. The 184-page original Batman project is expected to launch worldwide on Sep. 14, both in digital and physical format.