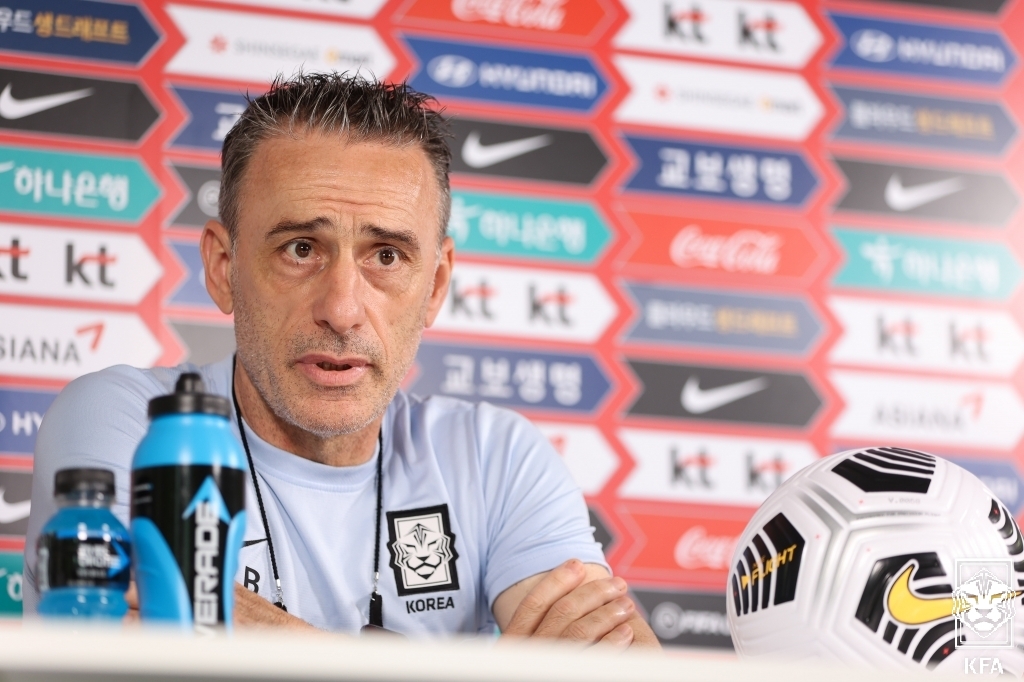 Paulo Bento, head coach of the South Korean men's national football team, speaks at an online press conference at the National Football Center in Paju, Gyeonggi Province, on Tuesday, in this photo provided by the Korea Football Association. (Korea Football Association)
As attested by a convincing 5-0 victory over Turkmenistan over the weekend, there's clearly very little, if anything, wrong with South Korea in the ongoing World Cup qualifying campaign.

On the eve of the next qualifier against Sri Lanka at home, South Korea head coach Paulo Bento said Tuesday he isn't about to fix anything that isn't broken.

"We have not changed our style of play so far, and there's no reason why we should at this moment," Bento said in an online prematch press conference. "Even when we deployed different formations in past matches, we still maintained our basic tactical structure. The important thing is to maintain our system and play within that framework."

South Korea will face Sri Lanka at 8 p.m. Wednesday at Goyang Stadium in Goyang, Gyeonggi Province. It will be the second of three remaining matches in the second round of the Asian qualification for the 2022 FIFA World Cup.

South Korea pounded Turkmenistan 5-0 last Saturday to stay atop Group H. Bento's players have netted 15 goals and not conceded any in four matches so far in the second round.

Bento acknowledged that South Korea, ranked 39th, will be heavily favored against the 204th-ranked Sri Lanka, which have already been eliminated from contention following a 3-2 loss to Lebanon on Saturday. And Bento added he wants to meet fans' high expectations with another dominant performance.

"It has been a while since we last faced them, but we'll still go back and analyze that match to prepare for tomorrow," Bento said. "Back then, they played strong defense and tried to create counterattack opportunities. We have to be prepared for that. I know a lot of people expect us to win. We'll respect our opponents and try our best to get the three points again."

Asked if he will rest some regulars and reach deeper into his bench against the underdogs Wednesday, Bento hinted at some lineup changes, without specifying which players will get the nod.

"Rather than talk about who will play and who will sit, we'll prepare for the match as a team," Bento said. "Our primary focus should be on rewarding our fans' faith and support with a strong match. But there will be some changes."

Earlier Tuesday, Sri Lanka head coach Amir Alagic said South Korea will be formidable because of their combination of skills, intelligence and fitness, which he called "the three pillars that represent total football."

He opined that Turkmenistan made a mistake of trying to defend against South Korean players for 90 minutes instead of competing against the system and vowed that his team won't make the same error.

"The Korean team is very well balanced, well organized and well synchronized. Their tactical attacking is not single minded. They're always changing ways of attack and changing ball carriers of attack," Alagic said. "Against such a highly skillful, fit and intelligent team, you can't defend 90 minutes. We'll have another approach as much as we can."

Alagic singled out South Korean captain Son Heung-min as the player to watch, calling the Tottenham Hotspur star "the best in Asia."

"It's delightful to see him. When you see other Korean players, they're lacking that total football approach, which Son has," Alagic said. "He's very influential, as a player, as a captain and also as a personality. We're lucky that he's playing and giving a chance to youngsters in Asia to follow him." (Yonhap)