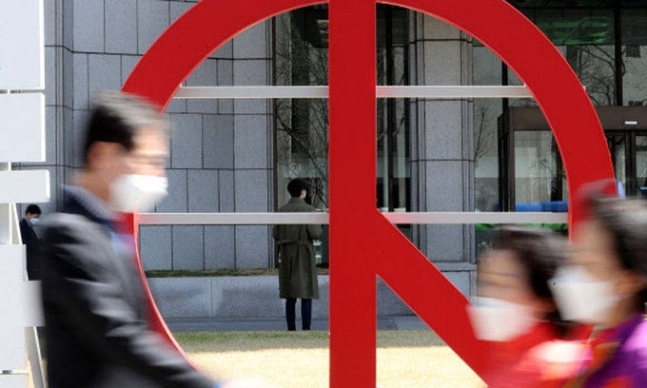 Pedestrians pass by a stamp sculpture installed in front of the Korea Press Center in Jung-gu, Seoul before the April 7 by-elections. (Yonhap)
Discussions on abolishing the age limit for presidential candidates are gaining traction in the wake of the sensation caused by 36-year-old Lee Jun-seok in the main opposition People Power Party’s leadership race.

Under the current Constitution, a candidate must be over 40 years old to run for president. The clause was first introduced in 1962 during the fifth constitutional amendment led by the military regime.

In order for the Constitution to be revised, the motion needs the support of more than two-thirds of the National Assembly, and to be approved in a referendum.

Kang Min-jin, 26, the leader of the youth chapter of the liberal minor Justice Party, was the first politician to ignite the debate at the 21st National Assembly.

Kang pointed out in a press briefing on May 30 that “All presidential candidates speak of ‘youth’ but none of them are youth.”

She said, “The constitutional provisions that prohibit those under 40 from running for president are discriminatory and unfair. The removal of the 40-year minimum age guarantees everyone the right to be president.”

Lee Kwang-jae, a lawmaker of the ruling Democratic Party of Korea and presidential candidate, shared her view.

On the same day, Lee said on his Facebook account, “We need to revise the anachronistic regulations that limit the right to run for election based on age.”

“Can’t 2030 (people in their 20s and 30s) be the leader of South Korea? The system that does not fit the trend of times needs to be drastically improved,” he said.

Another presidential hopeful and former Democratic Party leader Lee Nak-yon also said Friday that the age limit for young people to run for president should be lowered for their participation in politics.

“The current Constitution that defines the eligibility to run for president as 40 years old or older should be changed,” Lee said on his Facebook account. “The presidential election that competes for the future vision of the country should not be the exclusive property of the older generation.”

A People Power Party lawmaker Ha Tae-keung said, “In fact, I advocated two years ago that those under the age of 40 should be able to run for president. However, (this) has been highlighted again through the ‘Lee Jun-seok phenomenon.’”

He called on both ruling and opposition parties to change the system so that those under 40 can run for president. “Because we should change (only) the clause that limits the age of 40, it is possible to revise the Constitution if the National Assembly agrees.”

Public opinion on the need for a constitutional revision remains divided, according to a recent poll.