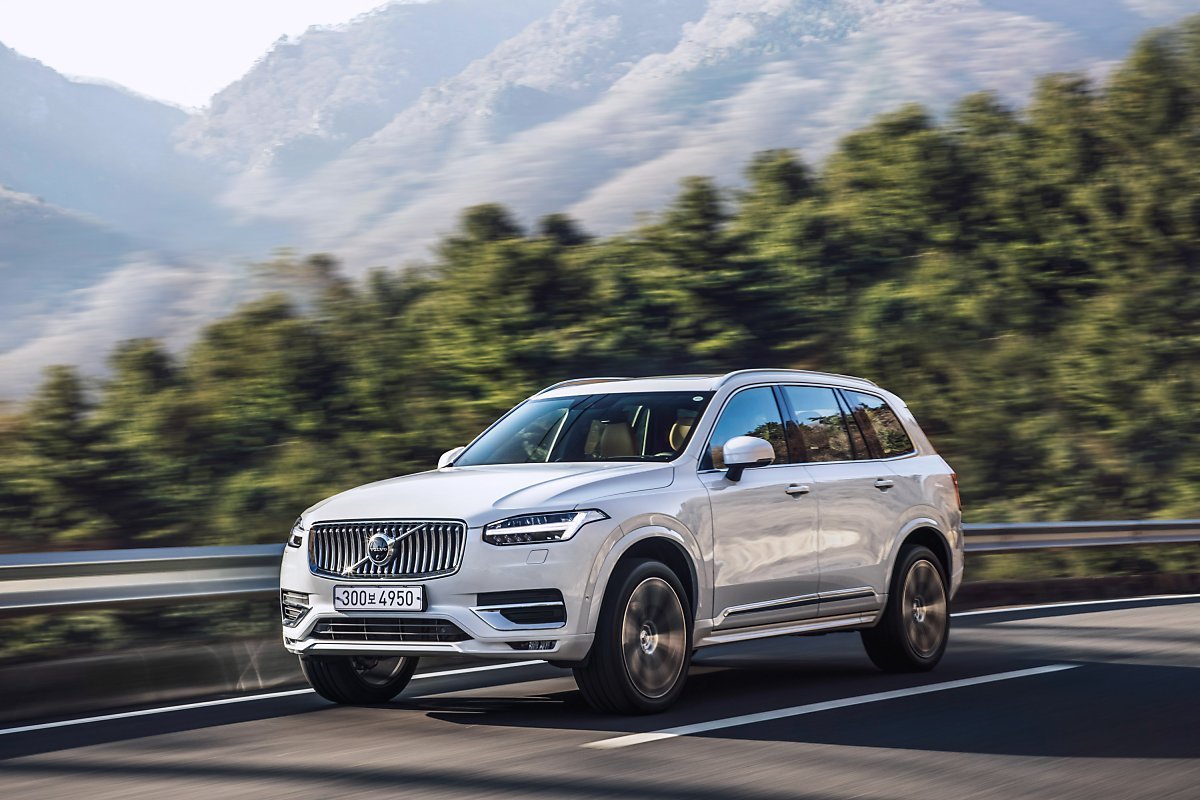 Volvo XC90 B6 (Volvo Cars Korea)
Volvo Cars Korea was once one of the back markers in South Korea’s automotive market, but it has emerged as a force to be reckoned with in recent years, thanks to its reputation for safety.

As cases accumulated over time that highlighted Volvo cars’ strength, the automaker’s sales, which were still below 2,000 units in 2013, have surpassed the 10,000-unit mark for two years running, setting a new sales record of 12,798 units in 2020.

Now, the automaker is charging ahead for the coming new mobility era, saying it will not launch any new diesel- or gasoline-fueled vehicles and introduce electrified vehicles only.

The mild hybrid variant of the XC90, its flagship sports utility vehicle, has arrived on the Korean market this year amid this background. The carmaker says its large SUV has been made more environment-friendly and fuel-efficient without weakening driving performance.

The Korea Herald test-drove the Volvo XC90 B6 for a round trip of about 100 kilometers from Mapo district in Seoul to Wirye New Town in Songdo, Incheon, Friday.

The signature iron logo on the grille and the LED headlight that is often said to resemble Thor’s hammer, gave off an exuberant vibe.

Inside the car, each interior factor matched well to offer a very satisfying look, with the amber Napa leather and a crystal gear knob in the center console.

The XC90 B6 comes in two trims, Momentum and Inscription, and the higher Inscription trim comes with high-quality Napa leather. 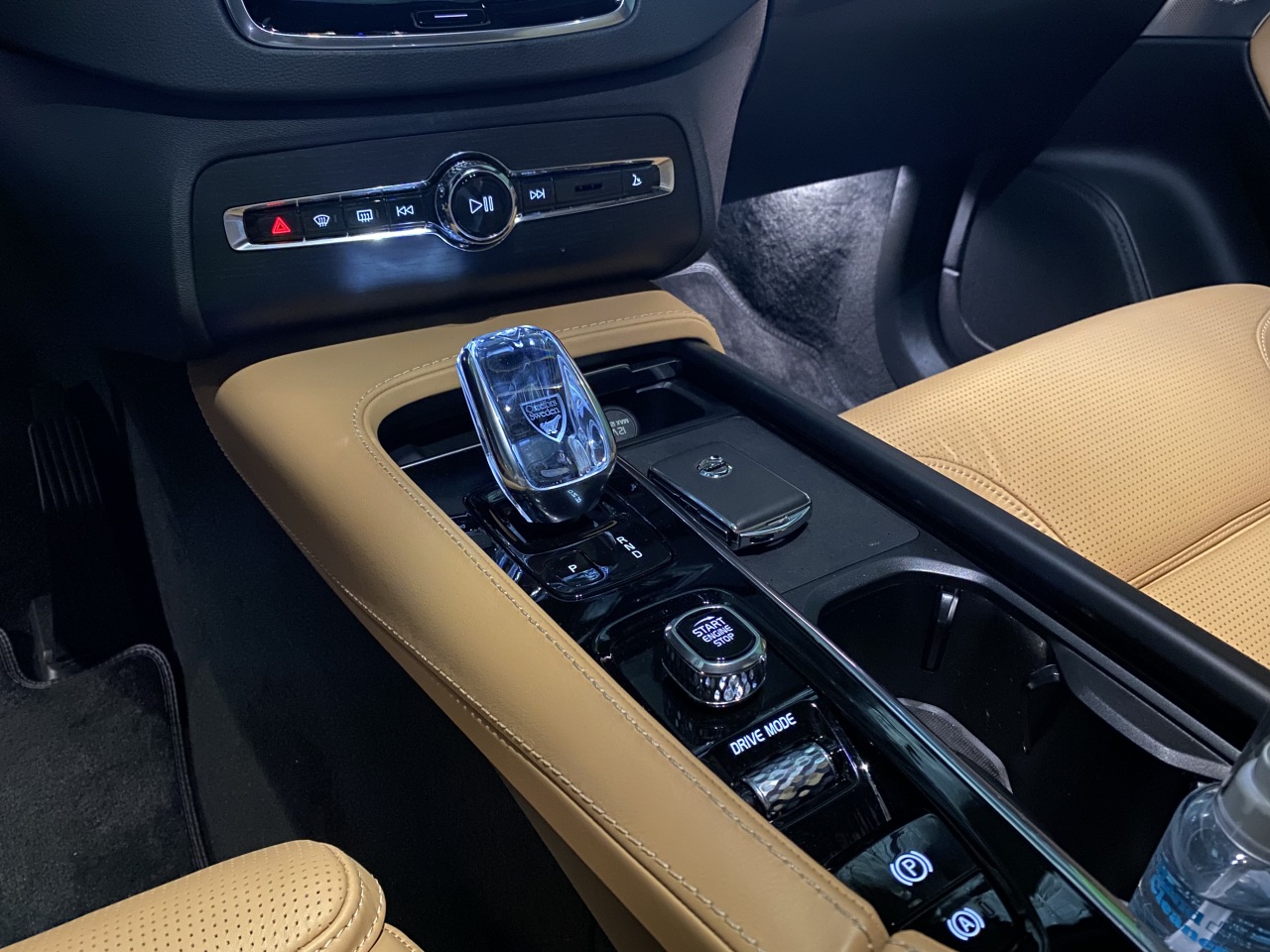 Volvo XC90 B6 (Jo He-rim/The Korea Herald)
The unique crystal gearstick, dubbed Crystal Eye, is produced by Swedish crystal brand Orrefors, and it played a big role in creating a luxury mood inside the car.

In the neatly designed center console was also a wireless battery charging platform. It was useful, but the smartphone would easily be displaced when the car moved.

There is room for improvement for the infotainment system, however. The 9-inch touch sensitive display looked a little old-fashioned, perhaps too small for such a big car, especially one costing more than 90 million won ($80,200).

The car did have a digital cockpit and a head up display that worked quickly to provide information such as the navigation and speed. 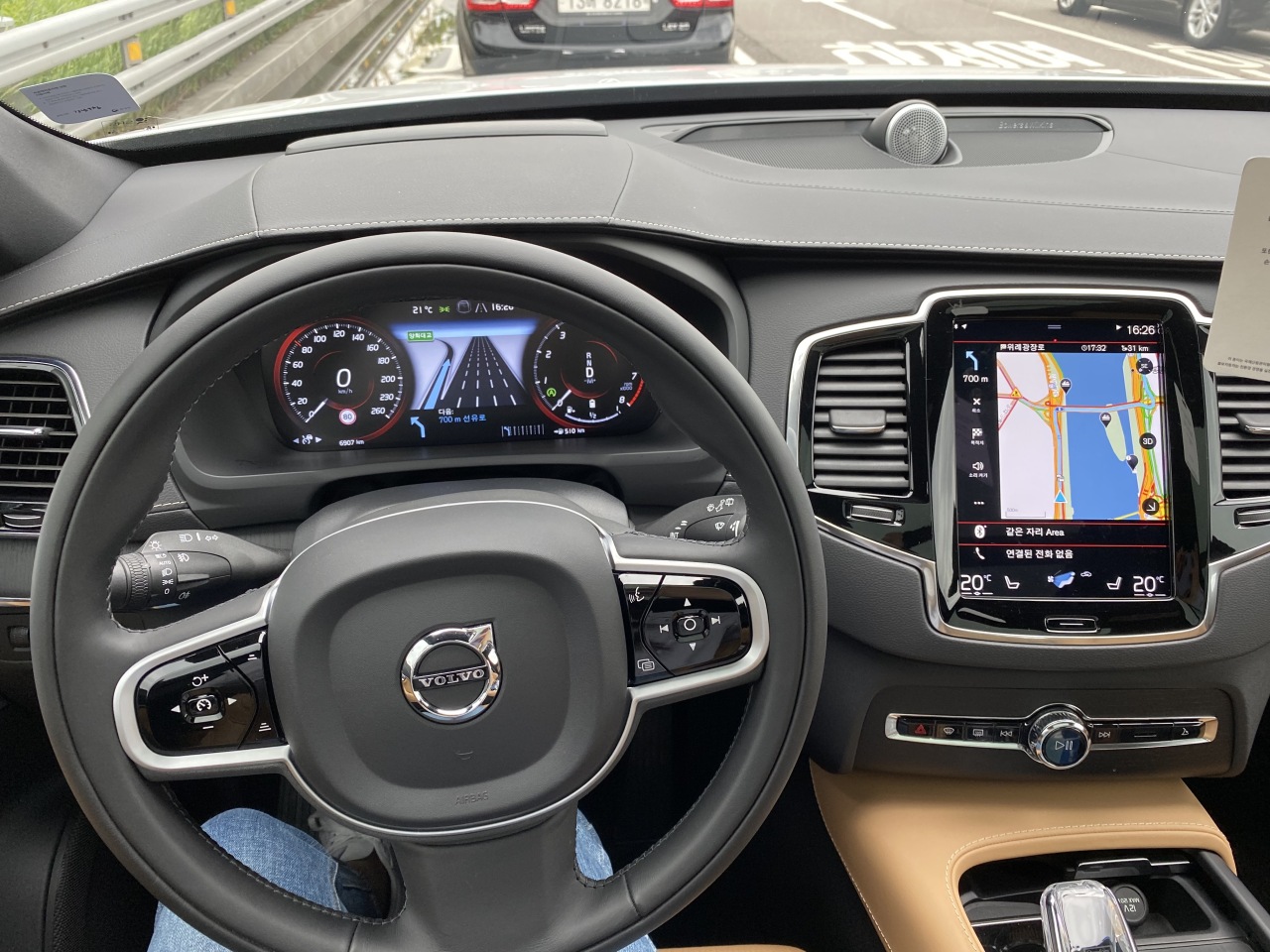 Volvo XC90 B6 (Jo He-rim/The Korea Herald)
Unlike its grand appearance, the car has no trouble accelerating, with its strong powertrain.

For the mild hybrid vehicle, the SUV has been equipped with B6 engine. With the new powertrain, the model can exert up to 300 horsepower, which is slightly below that of T6 variant with 318 horsepower. But the 48-Volt hybrid engine actually addes to strength by 14 horsepower, and it also added the smooth acceleration and quick response of the car.

The car is also equipped with Volvo’s advanced kinetic energy recovery braking system, and this also helps the large SUV to save fuel and reduce emission.

On sharp turns, the car also held firmly onto the ground, and the driving felt very stable.

Being trapped on the highly congested highway of the Olympic Boulevard Expressway en route to Wirye New City, the car’s Pilot Assist II system was a lot of help in easing foot fatigue caused from having to keep using the pedal.

When turned on, the sensor installed in the front of the car kept track of the distance with the vehicle in the front, and automatically adjusted the speed up to the preset limit of 30 kilometers per hour. The automaker said the speed limit can go up to 140 kph.

One of the reasons to purchase the Volvo XC90 B6 would be for its more than ample interior space. The car for the test drive was a seven-seater, and the third row of seats was folded down to provide an ample storage space of 1,007 liters. With both the second and third seats folded down, the trunk storage space reaches 1,856 liters.

As outdoor activities and car camping is in trend, the XC90 model looks like a suitable choice for heavy packers and campers. The two rows of rear seats fold seamlessly, providing a perfect sleeping platform.

The Bowers & Wilkins sound system and the expansive panoramic sunroof would also add as a plus to the XC90 B6 riding experience.