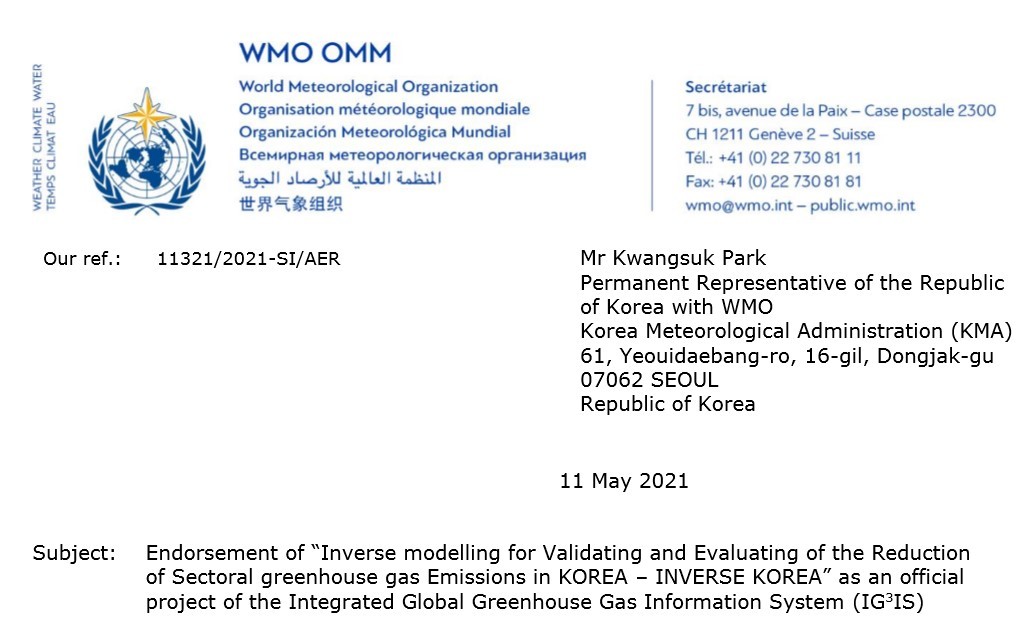 The project is named Inverse-Korea, which is short for inverse modeling for validating and evaluating the reduction of sectoral emissions in Korea, according to the KMA. The National Institute of Meteorological Sciences under the weather agency will carry out the project.

The KMA currently tracks greenhouse gas in real time with its three observatories on islands to the east, west and south of the peninsula. It has also set up a 3D network to analyze greenhouse gas emissions using ships, planes and skyscrapers.

According to the KMA, ‘Inverse-Korea’ will take things a step further and enable the weather agency to check where greenhouse gases begin and where they end up based on the meteorological model and observed data by 2023.

“This project will not only play an important role in achieving ‘carbon neutrality 2050’, but it will also greatly contribute to improving the technology of scientific and information systems in the international community,” WMO Secretary-General Pettri Taalas said.

The WMO initiated IG3IS in 2015 to analyze the origins of greenhouse gases to support the global mission of achieving carbon neutrality, where zero carbon dioxide emissions are observed across the world.

“The proposed project will make important steps toward the advancement of the methodological approaches in IG3IS,” said WMO Deputy Secretary-General Elena Manaenkova.

“If fully implemented, it will benefit the country and the global community highlighting the advantages of the observations-based approach to emission estimates at different scales,” she added.

‘Inverse-Korea’ is the fifth project in the world to have been officially approved by IG3IS, following the UK, Switzerland, New Zealand and Australia.

“The World Meteorological Organization‘s approval of the project is a worldwide recognition of the agency’s greenhouse gas stereoscopic monitoring and weather model technology,” said Park Kwang-suk, head of the KMA.

“We will do our best to provide scientific support for achieving carbon neutrality in 2050.”