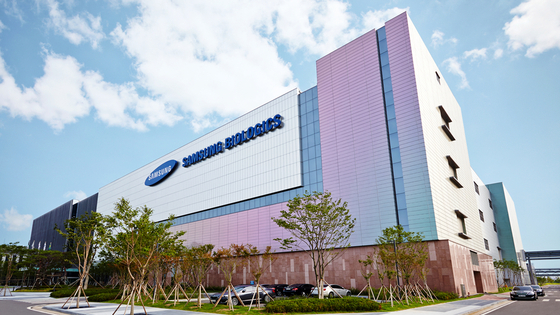 Samsung BioLogics headquarters in Songdo, Incheon (Samsung BioLogics)
South Korean media is zeroing in on Samsung BioLogics as the most likely partner of Moderna in its COVID-19 vaccine production here, a much-anticipated deal as the country deals with a vaccine shortage.

A formal announcement of the Samsung-Moderna deal will be made during South Korean President Moon Jae-in’s visit this week to the US for a summit with US President Joe Biden, a local TV station reported Friday, with a flurry of related reports coming from other media outlets over the weekend.

The Songdo, Incheon-based firm and unit of Samsung Group has neither denied or acknowledged the reports.

In a short regulatory filing Friday, it just said no decision has been made on producing Moderna jabs in South Korea. It would make a separate announcement when it can, or within one month, the firm added.

The response drew particular attention as the company did not deny the speculation, in sharp contrast to the flat denial company issued in response to the earlier speculation over a manufacturing deal with Pfizer.

Guessing games began last month when a government official revealed that a local firm could start producing a vaccine as early as August. Initial rumors had GC Pharma and Hanmi Pharmaceuticals as potential contractors.

Expectations are also running high for a vaccine deal as Moon is expected to discuss vaccine partnerships with President Biden as one of the main agenda items of their first summit.

Whether Samsung BioLogics’ CEO will join the delegation accompanying Moon’s trip to the US has not been disclosed by the company.

Samsung BioLogics is the most promising candidate for CMO contract with international COVID-19 vaccine providers, with the largest annual production capacity of 364,000 liters in a single location, the reports said.

Samsung BioLogics earlier this year said the company aims to expand the current CDMO business to cover a wider range of products, including cell and gene treatment drugs and vaccines.

Samsung BioLogics added the company would secure a combined bioreactor capacity of 620,000 liters, with the fourth plant’s completion.

Meanwhile, Moderna is currently looking for a person who will be in charge of the regional office that it would launch in South Korea soon.

According to the sources from the South Korean government, Moderna CEO Stephane Bancel could visit South Korea in May.