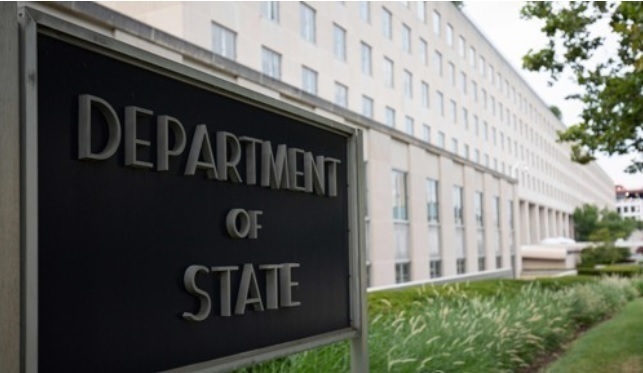 Department of State (Yonhap)
The US State Department detailed the South Korean government’s limitations on in-person worship to contain COVID-19, and conflicts that arose in the process in its annual International Religious Freedom report released Wednesday.

The report mentioned that the South Korean government placed restrictions on the number of persons who could gather together for any purpose, including for religious worship, to minimize exposure to the virus since February last year, following a COVID-19 outbreak in the country, and that leaders of most religious groups publicly stated that they accepted the restrictions as necessary to protect public safety and health. It added that international media widely reported on the government’s success in limiting the spread of COVID-19, and that 82 percent of Koreans positively appraised the government‘s response to the pandemic, according to a December Gallup poll.

The State Department also summarized the conflict between the government and Reverend Jun Kwang-hoon, a Presbyterian pastor and critic of President Moon, over a mass rally he led on Aug. 15 last year in downtown Seoul despite the government’s self-isolation orders imposed on his church following a cluster outbreak among the congregation.

It introduced Moon’s words that “no religious freedom, no freedom of assembly, nor freedom of speech can be claimed, if it is incurring a great deal of damage to the people.”

The report mentioned that 18 Protestant churches filed suit in the Seoul Administrative Court on Aug. 20, demanding that the city government suspend execution of a ban on in-person religious worship as it was a “violation of the freedom of religion,” and that the court dismissed the complaint.

The report detailed the conflict over the government’s criminal investigation into Shincheonji Church and its leader after health authorities “determined a single individual had infected fellow congregants” when that person attended church services twice in Daegu.

It also said the media and NGOs reported that Muslims, mostly foreign workers, continued to face religious discrimination in South Korea, noting that some individuals harshly criticized Muslims in general at the news of six Uzbeks who tested positive for COVID-19 after attending an outdoor religious gathering in July, although about 350 other worshippers at the event did not test positive.

The US State Department also cited a news report that in June, about two dozen police officers, other government officials and local residents in Incheon blocked a Christian NGO called Voice of the Martyrs Korea from floating 500 containers carrying rice, vitamins and Bibles into the sea to send them to North Korea.

It also mentioned that North Korean leader Kim Jong-un’s sister Kim Yo-jong slammed groups that conducted such launches, and that the South Korean parliament amended a law in December to prohibit any scattering of printed materials, goods, money or other items of value across the inter-Korean border without government authorization.

The South Korea section of the annual report began with Jehovah’s Witnesses, who said the new law on alternative options for conscientious objectors to mandatory military service was an improvement, but noted the disparity between the length of alternative service (three years) and military service (two years or less).

As for North Korea, the State Department said it continues to be deeply concerned about wide-ranging human rights abuses, including severe restrictions on religious freedom, and that it is committed to promoting accountability for the perpetrators of those abuses.

“Hundreds of thousands of people remain in prison camps, including for their religious activities. These are issues of genuine concern to the Biden-Harris administration, and as the administration has noted, they are intent on putting human rights issues at the center of our foreign policy,” Daniel Nadel, senior official at the State Department’s Office of International Religious Freedom, said in a press briefing on Wednesday.

There is “no tradeoff” between addressing human rights issues or addressing other matters of national security or bilateral concern, Nadel said.

“We can do all these things at once, and in doing so we both demonstrate the importance of our fundamental principles, but we also make better outcomes,” he said.

About the anti-leafleting law, the US promotes fundamental freedoms, and is working with civil society partners to promote human rights and the free flow of information into North Korea, Nadel said.