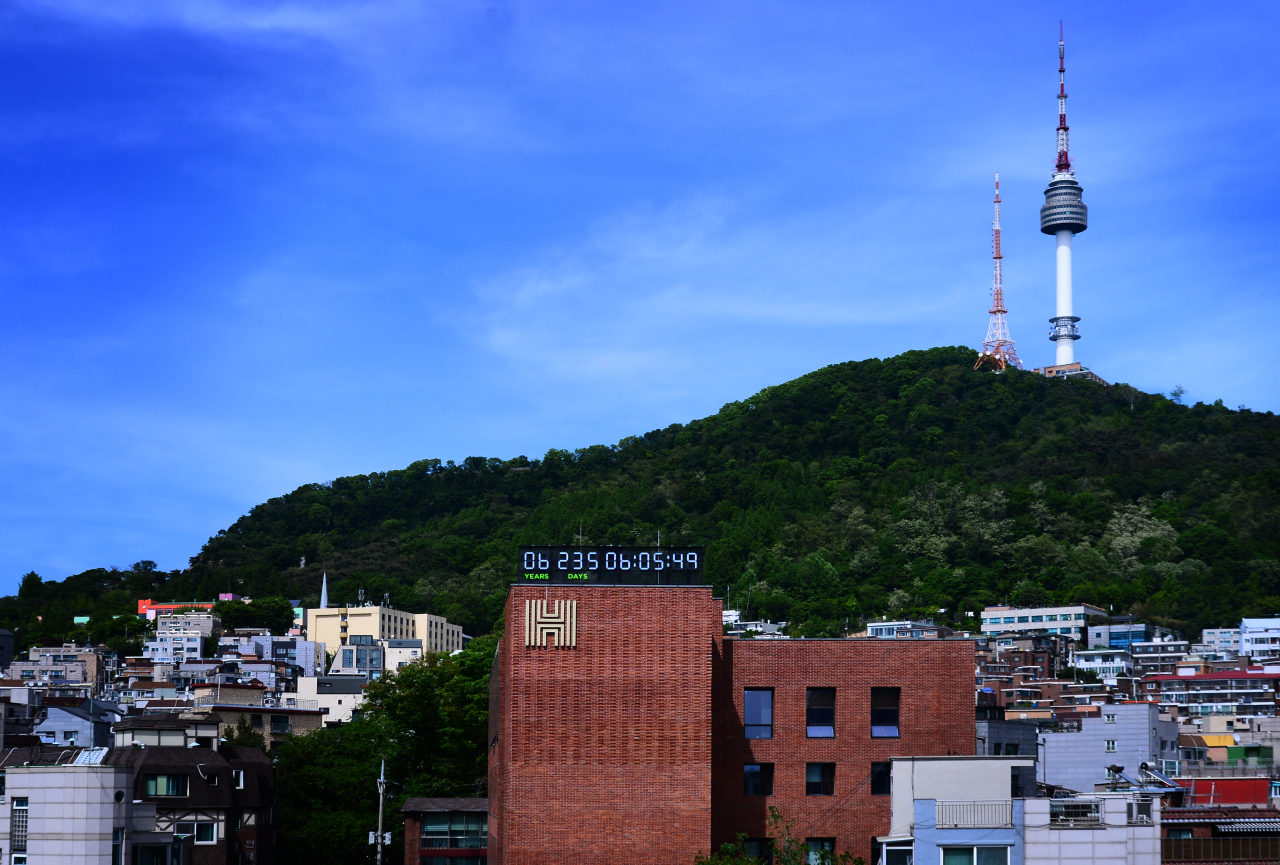 The monument-sized Climate Clock, which is the third of its kind in the world and the first in Korea, is set up on the roof of the Herald Corp. headquarters office in Huam-dong, Yongsan-gu, Seoul. The Climate Clock shows that Earth has about 6 years, 235 days, 6 hours, 6 minutes and 42 seconds left before climate change becomes irreversible, based on current emission rates. (Park Hae-mook/The Herald Business)
At a glance, the series of numbers -- six years, 235 days, six hours, four minutes and 55 seconds -- makes little sense.

But they are arguably the most important numbers for humanity. They represent the time we have left until the Earth’s deadline: the “point of no return” in the climate crisis.

The monument-sized Climate Clock showing the numbers was unveiled Thursday on the roof of the Herald Corp. headquarters in Seoul, sending a chilling warning that the Earth is racing toward catastrophe.

The digital clock, which is 8.5 meters wide and 1.8 meters long, is the first permanent Climate Clock in Asia and the third in the world. The first was set up in Berlin in 2019 and the second in New York in 2020.

With South Korea’s landmark N Seoul Tower in the background, the Climate Clock in Seoul shows that as of Thursday the Earth had about six years, 235 days, six hours, four minutes and 55 seconds before global warming reaches irreversible levels, based on current emission rates. 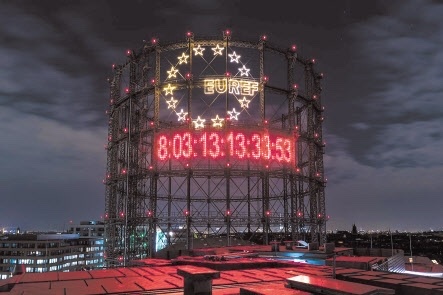 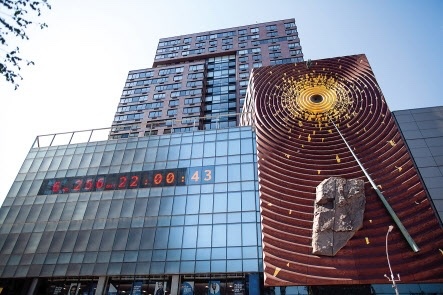 The Climate Clock installed in New York City, the US in 2020. (The Climate Clock)
Created by artists Gan Golan and Andrew Boyd, the Climate Clock counts down how much time is left before we deplete the Earth’s carbon budget -- that is, the amount of carbon dioxide we can still release into the atmosphere while limiting global warming to 1.5 degrees Celsius above preindustrial levels.

According to scientists, keeping the world from warming by more than 1.5 degrees Celsius from preindustrial levels is crucial if we are to avoid the catastrophic impact of climate change -- rising sea levels, flooding, droughts, extreme heat waves, wildfires and other disasters.

“Grounded in the latest climate science, the Climate Clock tells us what we need to do by when,” Boyd told The Korea Herald. “In short, we need to build a 100 percent renewable-powered future in less than seven years.”

The numbers on the Climate Clock are based on the amount of global carbon emissions as well as the amount of the world’s energy supplied from renewable sources, currently at 12 percent and slowly rising. The data comes from the Mercator Research Institute on Global Commons and Climate Change, and from One World in Data, respectively.

The arrival of the Climate Clock is part of the Herald Corp.’s campaign to address the climate emergency, which the company sees as the defining challenge of our time.

Through the campaign, Herald Corp., which owns two of Korea’s major newspapers, The Korea Herald and The Herald Business, seeks to draw attention to the climate crisis and remind Koreans that the Earth has a deadline, it said. 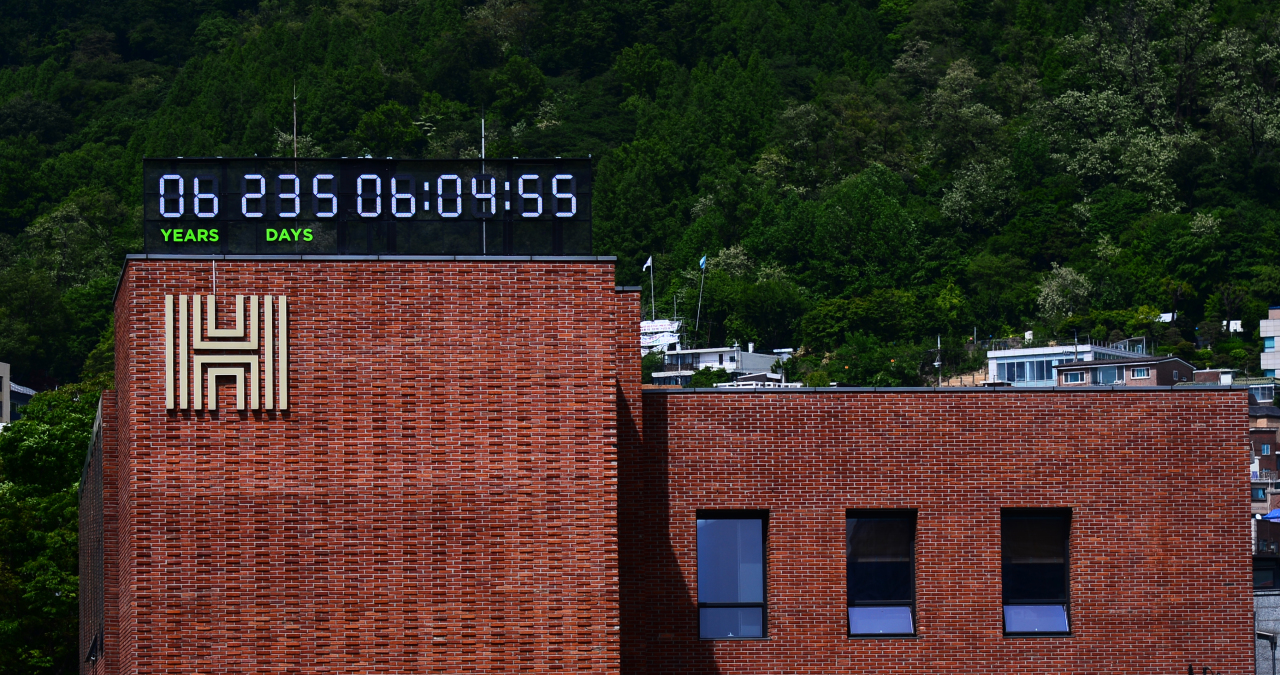 The monument-sized Climate Clock, which is the third of its kind in the world and the first in Korea, is set up on the roof of the Herald Corp. headquarters office in Huam-dong, Yongsan-gu, Seoul. (Park Hae-mook/The Herald Business)
The Climate Clock’s co-creators welcomed its presence in Seoul.

“After too many years where governments and major media platforms did not take the climate crisis seriously enough, it is incredibly heartening to partner with Herald Corp., who are making the climate emergency a priority focus of their reporting and advocacy,” Boyd said.

“Media companies and organizations such as The Korea Herald play an indispensable role in highlighting the urgency of the climate crisis as well as the many solution pathways, particularly the rapid deployment of renewable energy, available to address it,” he added.

The installation of the Climate Clock comes at a critical point for the global efforts to combat the climate crisis.

This year is marked by significant political events, including the P4G summit -- Partnering for Green Growth and the Global Goals 2030 -- to be held in Seoul on May 30-31, as well as the UN Climate Change Conference, also known as COP26, set for Glasgow on Nov. 1-12.

“We hope the Seoul Climate Clock will serve as a lightning rod for South Korea’s climate movement and raise the country-wide emission-reduction targets that South Korea brings to the COP26 UN Climate Summit in Glasgow, Scotland later this year,” said co-creator Golan.

“With luck, Seoul’s Climate Clock will not only spark momentum nationally, but also encourage other key countries in East Asia to raise their climate ambitions,” he added. 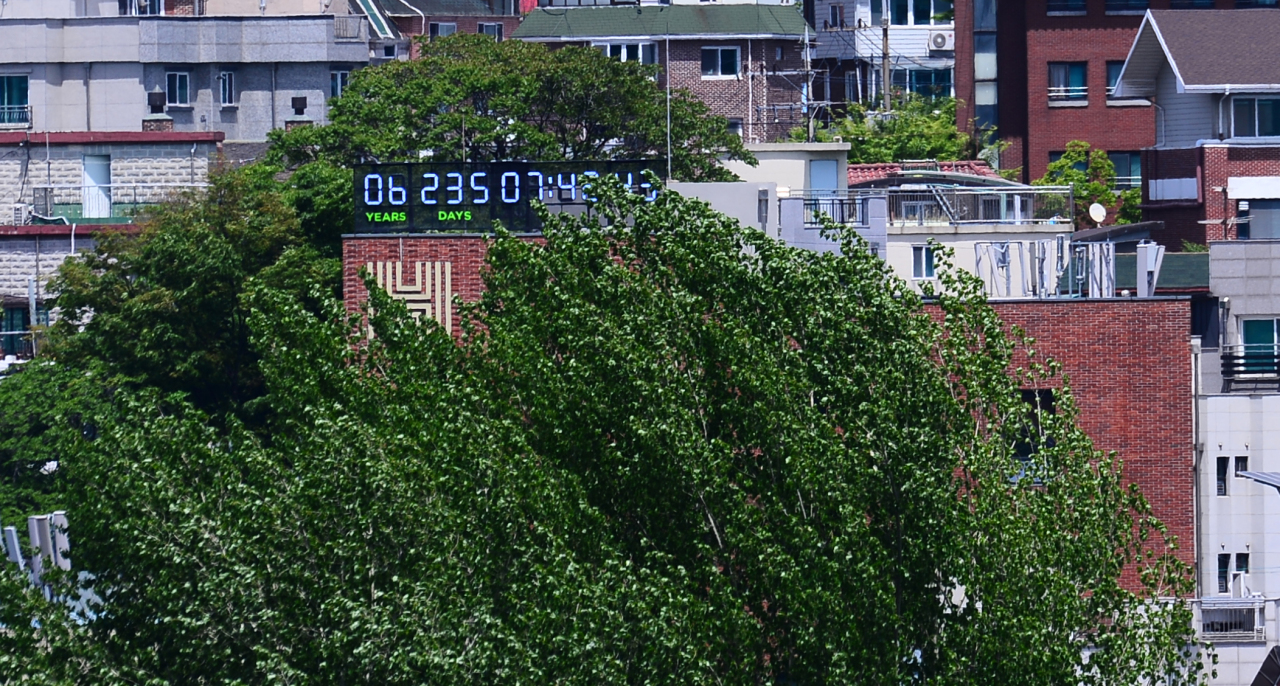 The monument-sized Climate Clock, which is the third of its kind in the world and the first in Korea, is set up on the roof of the Herald Corp. headquarters office in Huam-dong, Yongsan-gu, Seoul. (Park Hae-mook/The Herald Business)
The Climate Clock project, which involves a team of artists, scientists, engineers, designers and activists from around the globe, is an open-source project presenting a “critical window” for internationally-coordinated action to reduce emissions and avert climate disaster.

According to the founders, the Climate Clocks -- some small, others large -- are being built temporarily or permanently at homes, schools and public spaces all over the world from Sydney to Istanbul. Another monumental clock is set to be unveiled in Rome in May at the earliest.

The creators said they had previously made a small-sized climate clock for Greta Thunberg, the teenage activist from Sweden, before her appearance at the United Nations Climate Action Summit in 2019.

In an effort to contribute to achieving climate equity and justice, the Climate Clock team charges licensing fees to for-profit organizations, municipalities and governments that want to set up the clocks. The funds are spent on activists seeking to bring the Climate Clocks to their cities, according to the organization.

For individuals hoping to make their own watches or portable clocks, free kits are available on its website.