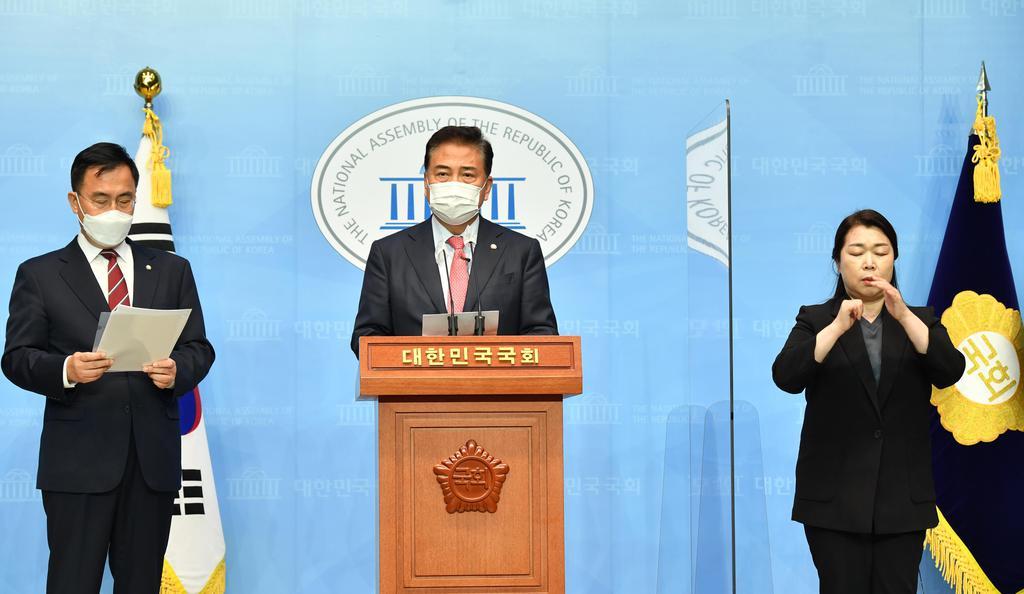 Reps. Park Jin (C) and Choi Hyung-du (L) of the main opposition People Power Party announce a statement on the presentation of the party's resolution calling for the government to ramp up a Seoul-Washington vaccine partnership to overcome the pandemic at the National Assembly in Seoul on Monday. (Yonhap)
The main opposition People Power Party (PPP) plans to send a delegation to the United States this week to discuss bilateral cooperation related to COVID-19 vaccines, party officials said Tuesday.

PPP Rep. Park Jin and Rep. Choi Hyung-du will travel to the US on Wednesday to meet with Washington officials, legislature representatives and think tank figures to explore means of cooperation regarding coronavirus vaccines, including the possibility of a South Korea-US vaccine swap arrangement, according to Rep. Kim Gi-hyeon, the party's floor leader.

The trip was arranged as South Korea has called for the US to help address Seoul's shortage of new coronavirus vaccines. Officials in Seoul said they were seeking a vaccine swap deal with the US.

The delegation also plans to discuss with US officials the possibility of South Korea potentially joining the US-led Quad forum, according to Kim.

The forum refers to the Quadrilateral Security Dialogue group, which involves Japan, Australia and India, and is widely viewed as a counterbalance to China's growing influence.

According to Kim, the PPP has organized its own independent delegation as the government and the ruling Democratic Party have not responded to a proposal to send a bipartisan delegation to the US. (Yonhap)