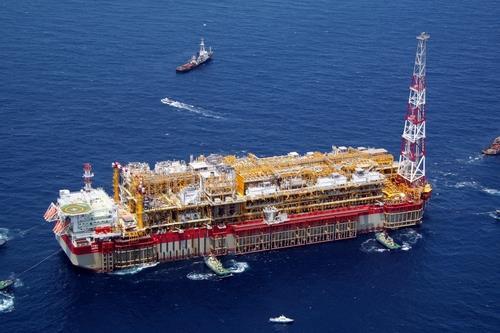 The deal is a part of a total 2.5 trillion won order to build a FPSO, which was placed by Brazilian state-owned oil firm Petrobras, KSOE said.

FPSO is short for a floating production, storage and offloading vessel, a type of floating tank system used in the offshore oil and gas industry.

"Thanks to increasing oil prices, demand for offshore plants has been on the recovery," said KSOE, the subholding company of Hyundai Heavy Industries Holdings Co., in an emailed statement.

Hyundai Heavy Industries Co., a subsidiary of KSOE, will construct the hull of the FPSO, which floats the facilities and storage oil, with the Singaporean shipbuilder building the topside of the FPSO, which produces and refines oil.

Hyundai Heavy Industries will start constructing the hull of the offshore plant in the first half of next year, nine months after designing it.

The facilities will be put together in the seas off Buzios, 210 kilometers southeast of Rio de Janeiro in Brazil, in the second half of 2024.