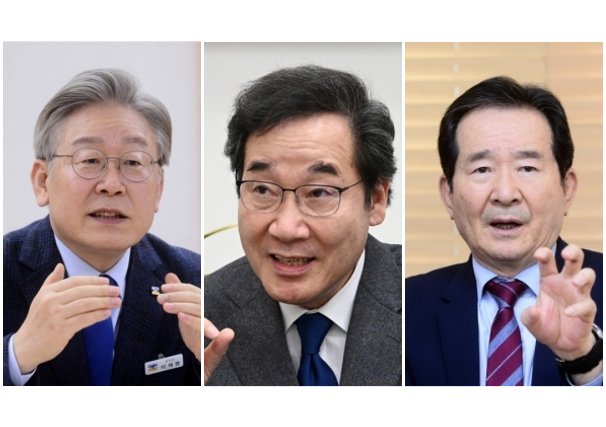 Gyeonggi Gov. Lee Jae-myung, former Democratic Party leader Lee Nak-yon and former Prime Minister Chung Sye-kyun (The Herald Business/Lee Sang-seob)
South Korea’s presidential race kicked off Sunday with an announcement from two-term lawmaker Park Yong-jin that he intended to run for president in next year’s election, while heavyweights geared up for the election by rallying supporters.

Rep. Park of the ruling Democratic Party held a ceremony to announce his candidacy outside the National Assembly on Sunday.

“The figures and forces responsible for disappointing and angering the younger generation with outdated and established politics for 10 years cannot lead the new era,” he said.

With Park getting off to an early start, others are expected to make their candidacy official in the coming weeks.

Presidential front-runner Gov. Lee will launch the Korea Growth and Fair Forum this month, signaling the start of the presidential campaign and determining its messaging and policies. Thirty lawmakers reportedly expressed their intention to join.

Lee Nak-yon will announce his policy vision Monday at a symposium organized by the think tank Solidarity and Symbiosis. Chung Sye-kyun will attend the Gwanghwamun Forum, which will be held at Yeouido on Tuesday. The Gwanghwamun Forum is a research group led by lawmakers in support of Chung.

Alongside the Big Three, more potential candidates are expected to emerge from the ruling bloc soon.

Rep. Kim Doo-kwan of the Democratic Party expressed his willingness to run for president on Sunday, describing himself as the clear heir of President Moon Jae-in and former President Roh Moo-hyun. Kim plans to publish an autobiography soon, titled “There Was No Flowery Road,” and to officially announce his candidacy next month.

Lee Nak-yon, who is competing with Gov. Lee within the ruling party, was sluggish at 5 percent and Chung Sye-kyun was far behind at 1 percent. In the opposition bloc, People’s Party Chairman Ahn Cheol-soo received 3 percent support and independent Rep. Hong Joon-pyo, a former People Power Party chairman, received 2 percent.