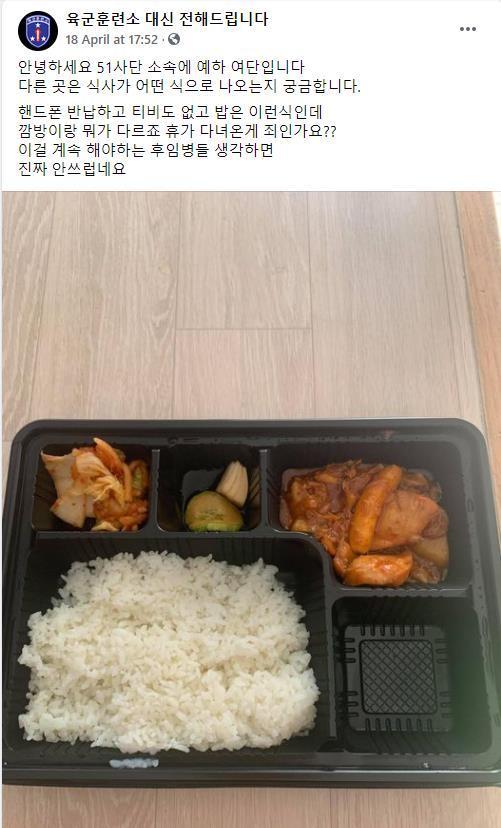 An army conscript claims that he had not been given sufficient meals while in quarantine in a Facebook post on April 18. (Yonhap)
진행자: 김혜연, Kevin Lee Selzer

1. Lee’s art collection to be split up, donated to public sector
- Some experts say collection should have been kept intact

[2] Around 23,000 art pieces -- 21,600 antique works and 1,600 modern and contemporary works -- will be donated to a number of public museums around the country as well as to Seoul National University, according to Samsung.

[4] “It seems the collection will end up scattered in different entities across the country, which lowers the value of the collection. It would have been better to keep the collection as a whole at one place to showcase as Lee Kun-hee’s collection. That would have helped attract more attention and visitors to the works both from home and abroad,” said Choe Byong-suh, an honorary professor at Dongduk Women’s University.

2. Watchdog to probe military for abuse allegations in COVID response

[1] South Korea’s National Human Rights Commission said Thursday that it will launch an investigation into allegations that the military violated rights of conscripts who said they had been fed poorly and denied access to bathrooms due to the COVID-19 response.

[2] The previous week, an Army conscript prompted public outcry when he revealed on Facebook that he had been given insufficient meals while in quarantine, showing a picture of what appeared to be a nearly empty tray.

[3] The military admitted there had been a shortage of meals rationed because those in quarantine had to receive their meals after others, adding that it will increase the supply.

[4] The rights panel said it will make in-person interviews with conscripts who had lodged complaints, and look at rights abuses at major boot camps. Outside experts will join the probe to help write up a recommendation, it added. The military said it will cooperate with the inquiry.