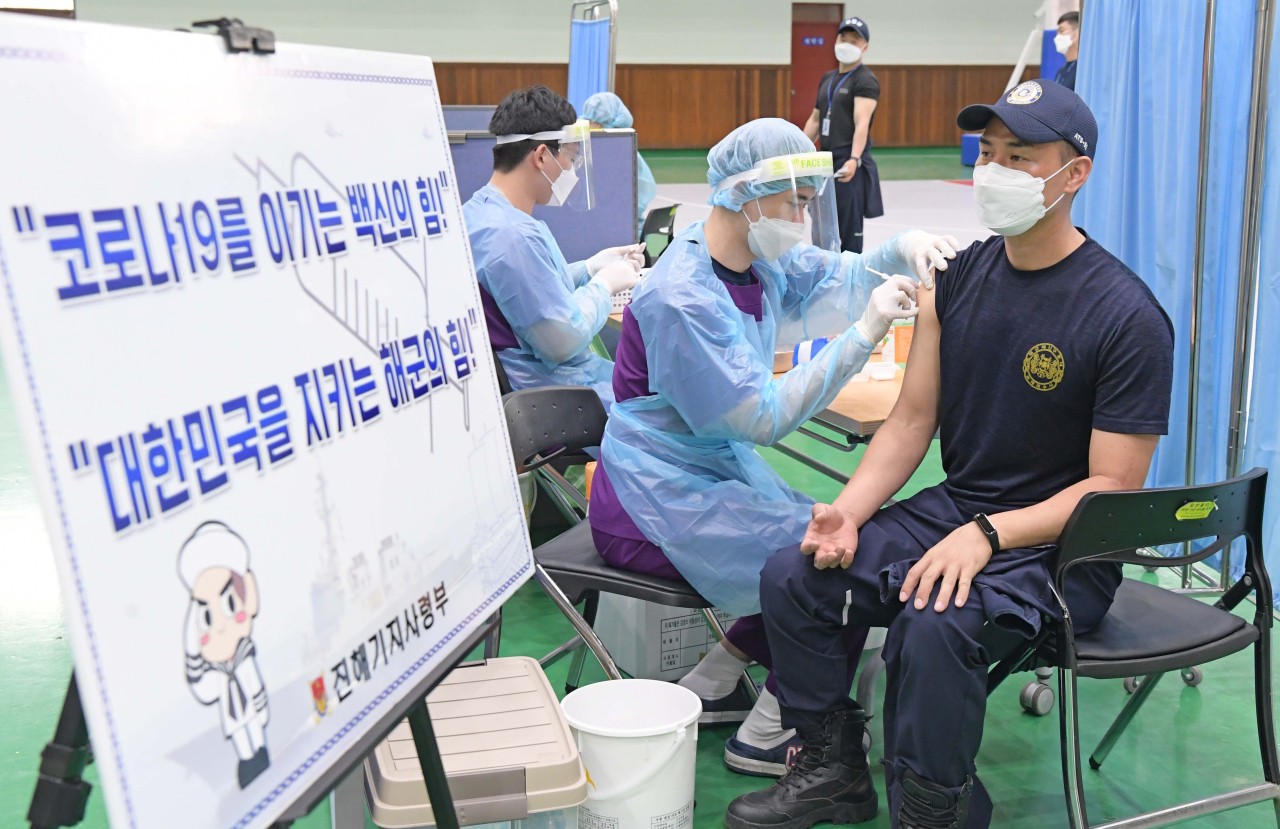 A military worker gets vaccinated at a military stadium in the southern city of Changwon on Thursday. (Yonhap)
South Korea has inoculated more than 3 million people in two months since its vaccine rollout, health authorities said Thursday, as the country ramps up its COVID-19 immunization drive by providing more shots to create herd immunity by November.

An accumulated 3,012,654 people were administered with their first shots as of 3:30 p.m. since the nationwide campaign kicked off on Feb. 26, accounting for roughly 5.6 percent of the country's 52 million population, the Korea Disease Control and Prevention Agency (KDCA) said.

The authorities have been ramping up the speed of vaccinations to complete inoculating 12 million people by end-June, with a goal of achieving herd immunity by November.

To speed up the campaign, the authorities said they have newly opened 50 state-run injection centers this week alone, raising the total to 257.

The accelerating inoculations come amid woes over a potential delay in vaccine supplies, which could possibly affect the schedule of the nationwide inoculation scheme.

Yet, the arrival schedule has only been finalized for AstraZeneca and Pfizer vaccines, which both require two-dose regimes, for the second quarter.

A total of 4.12 million doses of AstraZeneca and Pfizer vaccines have been supplied through direct contracts with drug firms or the World Health Organization's global vaccine COVAX Facility project, the KDCA said.

The KDCA said it plans to receive an additional 13.97 million doses of vaccines during the May-June period.

Adding to woes, a safety controversy over the AstraZeneca vaccine has complicated the inoculation campaign, as the products make up about 60 percent of the country's rollout for the first half of the year.

The country also faced a stumbling block due to the United States' decision to temporarily pause the use of Johnson & Johnson's Janssen products over blood clotting. The use was resumed last week.

The authorities have planned to receive 6 million doses of the Johnson & Johnson vaccine. The bottles are scheduled to be provided in the third quarter, but the shipment schedule is not finalized.

To stave off a potential supply shortage, the government said it will put all-out efforts to develop homegrown COVID-19 vaccines.

Two homegrown vaccines against COVID-19 are expected to be in phase two or three clinical as early as this year or early next year, the government said.

The approval is expected as early as the end of this year or early next year, and members of the general population are expected to be inoculated with the products next year, it said.

Meanwhile, the Ministry of Food and Drug Safety said it has started preliminary reviews of Novavax and Russian Sputnik V vaccines.

SK Bioscience and Huons Global, the local manufacturors of Novavax and Sputnik V shots, respectively, have filed for prelimiary approval of the products, according to the drug safety watchdog.