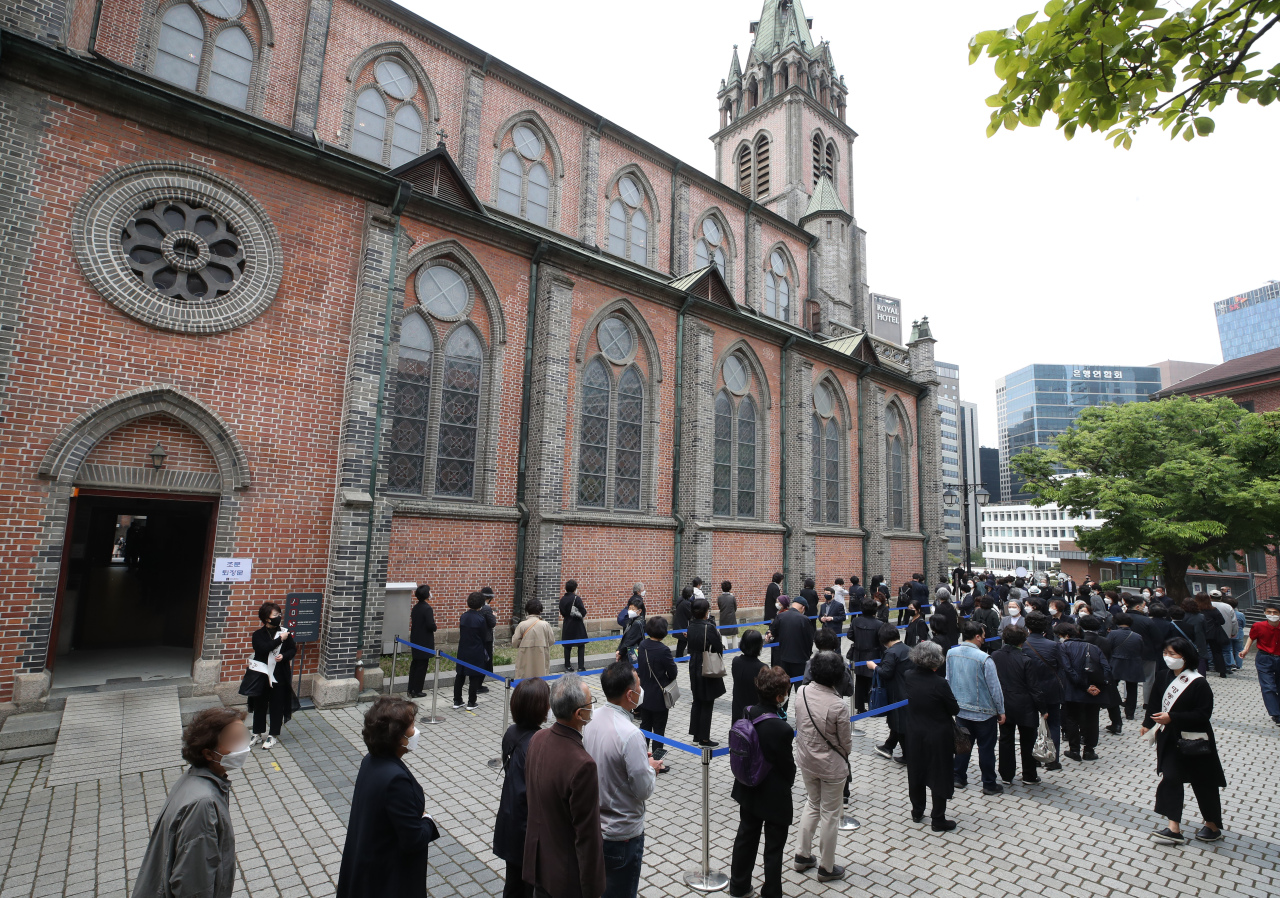 Catholics line up to pay their respects to the late Cardinal Nicholas Cheong Jin-suk on Wednesday at Myeongdong Cathedral in central Seoul. (Yonhap)
After Cardinal Nicholas Cheong Jin-suk died Tuesday night at the age of 89, Roman Catholics gathered at the Myeongdong Cathedral in central Seoul on Wednesday to pay their respects to South Korea’s second cardinal.

There was a long line of people waiting. The late cardinal was in a glass coffin before the altar in the cathedral, where attendance at a requiem Mass held in Wednesday’s early morning hours was limited to 80 people out of concern about COVID-19.

The crowd was much smaller than in 2009 when his predecessor, Cardinal Stephen Kim Sou-hwan, died, according to an official from the cathedral, as the Archdiocese of Seoul asked its priests to refrain from visiting in consideration of the pandemic.

Officials from Myeongdong Cathedral asked visitors to comply with social distancing rules, which meant standing a minimum of 1 meter apart while waiting in line.

Next to the coffin was a banner bearing the phrase “Omnibus Omnia,” meaning “all things to all men” in Latin.

There were no flowers. “We won’t accept any flowers or money regarding the funeral,” said a sign at the entrance.

“I came here as soon as I could. I am perspiring now,” said a middle-aged woman standing in line who wished to be identified by her surname, Kim.

“I knew that he would pass away one day, but still it is hard to take it in,” she said. “Cheong was devoted to serving others. He was a big figure for Korean Catholics.”

The first requiem Mass was attended by figures from the Archdiocese of Seoul, priests and some 30 Catholic faithful.

“Cheong was a person who gave his everything for the poor,” Cardinal Andrew Yeom Soo-jung said. “If Cardinal Kim Sou-hwan was our father, Cardinal Cheong Jin-suk was our mother, being warm and kind.”

Visitors can pay their respects from 7 a.m. to 10 p.m. daily through Friday.

A funeral Mass will be held Saturday at the cathedral. The cardinal will be laid to rest in a Catholic cemetery in Yongin, Gyeonggi Province, south of Seoul, where Cardinal Kim is also buried.