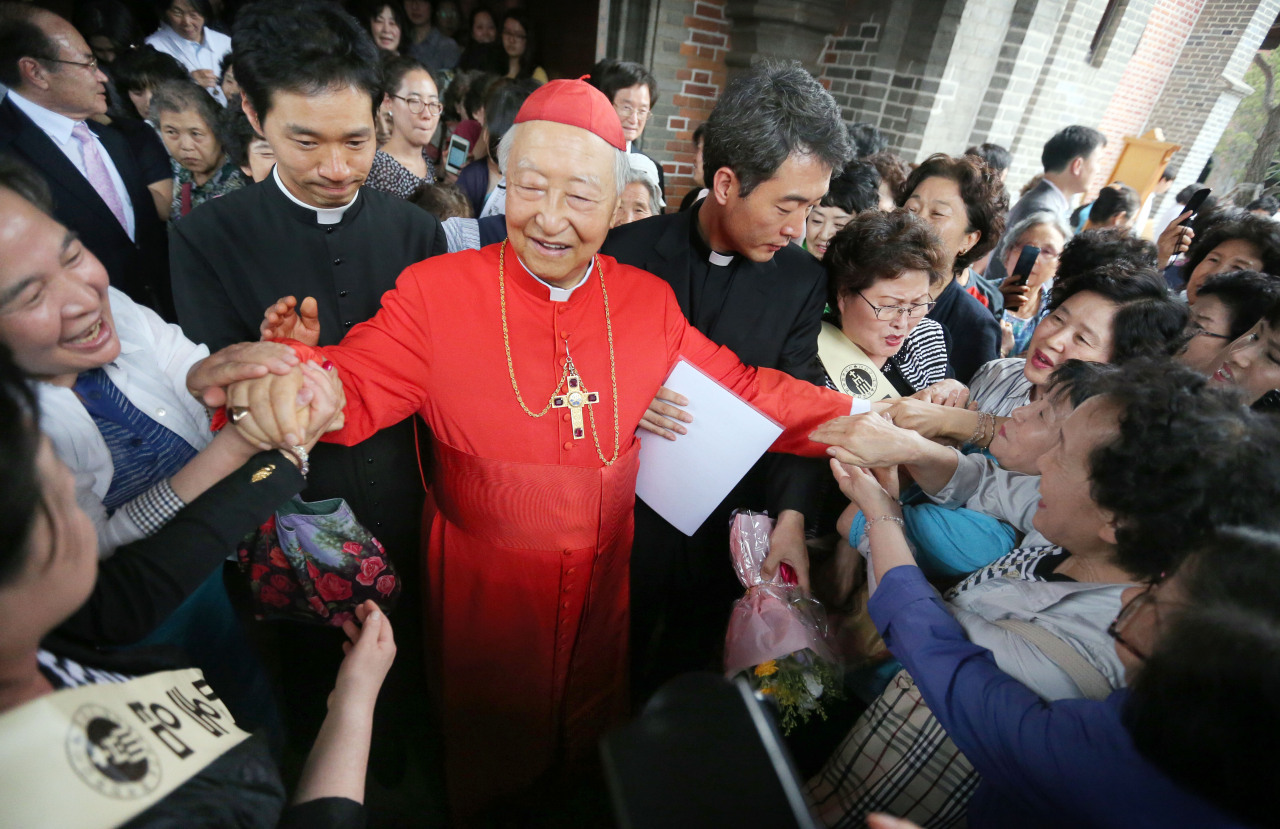 Cardinal Cheong Jin-suk greets worshippers after Mass on June 15, 2012, at Myeong-dong Cathedral before retiring as archbishop of Seoul. (Yonhap)
Cardinal Nicholas Cheong Jin-suk was born into a Catholic household in Seoul on Dec. 2, 1931, although his registered birthday is Dec. 7. He was baptized four days after he was born and received the baptismal name Nicholas. While Cheong’s mother was pregnant with him, she dreamt of a young man calling her mother and telling her that he has become a bishop.

Cheong was born and raised in his wealthy maternal grandfather’s house. His mother’s side of the family had been devout Catholics for generations and his maternal grandfather served as a community leader at Myeongdong Cathedral. Cheong said that he went to early morning mass every day for three years when he was young, not missing a single day. His father was absent for most of his life as he had gone to North Korea right after the liberation from Japanese colonization and went on to serve as a vice minister of industries there before being purged.

The cardinal entered Seoul National University as a chemical engineering major in April 1950, aspiring to become an inventor. However, the Korean War erupted just two months later, forever changing his life. While serving as an interpreter at the National Defense Corps and witnessing soldiers die around him, he came across a book on St. Maria Goretti at the office of the US Army chaplain and decided to become a priest.

He entered the Catholic University of Korea and was ordained on March 18, 1961 at the Myeongdong Cathedral in Seoul. He went on to spend several years in different religious organizations as an instructor and secretary before going on to study at the Pontifical Urban University in Rome in 1968. After receiving his Master’s degree in canon law, he was appointed bishop in 1970. At age 38, he was the youngest bishop in Korea. His motto was “Omnibus Omnia” which means “all things to all men.” He served for 28 years as the second bishop of the Diocese of Cheongju.

Cheong dedicated his life to the study of canon law and was considered Korea’s leading authority in the field. After seeing a Japanese translated version of the original Latin law, he decided to pen a Korean translation. He founded the canon law translation committee in 1983 and began the work with around 10 other priests who majored in canon law. The Korean translation of the canon law was published in 1989. This is considered one of Cheong’s most outstanding achievements. He continued to write books on canon laws in Korean, writing a set of 15 books until 2002. Throughout his life, he wrote more than 50 books, including two books that were written last year.

Cheong was promoted to archbishop of Seoul when the late Cardinal Stephen Kim Sou-hwan retired from the post in 1998. He was also elected as the president of the Korean Episcopal Conference that year. He was made cardinal by Pope Benedict XVI in 2006 at the age of 74, becoming only the second cardinal in Korea. At the time, Kim said that he could rest in peace knowing that Korea has another cardinal. Kim passed away in 2008.

During his time as archbishop of Seoul, Cheong led the reconstruction of the Catholic University of Korea’s Seoul St. Mary’s Hospital and the Myeongdong Cathedral.

In 2000, Cheong convened a synod, a council of the Church that decides on church doctrines and practices, for the first time since 1922 and allowed priests to elect district leaders so that ministry can be done on a district scale.

He was firm on his views on valuing life. He launched the Catholic Life Committee in 2005 after criticizing professor Hwang Woo-suk for his stem cell research using embryos. The committee then invested 10 billion won ($8.9 million) in adult stem cell research. His appreciation of life could also be seen in the donation of his cornea upon his death.

After serving for 14 years, Cheong retired in 2012, setting a record as the longest serving archbishop in Korea. Cardinal Andrew Yeom Soo-jung was appointed as the archbishop of Seoul.

During his retirement, Cheong continued to write numerous books until he was reportedly hospitalized in February due to old age. Cheong died on Tuesday night at the Seoul St. Mary’s Hospital at the age of 89. His body currently lies in a glass coffin at Myeongdong Cathedral, where members of the public can bid farewell before his funeral on Saturday.