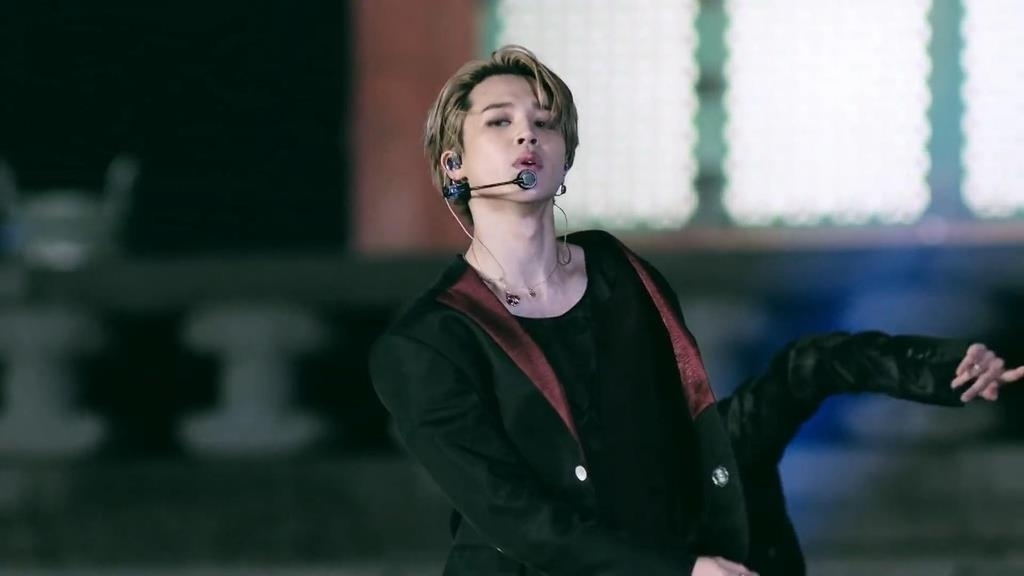 BTS’ Jimin wears a hanbok suit designed by Kim Ri-eul on NBC’s “The Tonight Show Starring Jimmy Fallon.” (Myart Auction)
A traditional Korean outfit worn by BTS’ Jimin that was scheduled to go under the hammer was removed last minute on Thursday.

His fans however are calling for the modern “hanbok” suit to be put up for auction as planned. The K-pop superstar wore it for a September performance on NBC’s “The Tonight Show Starring Jimmy Fallon.”

Myart Auction on Thursday removed the outfit from its online auction list last minute and it was only available for preview as the auction kicked off on the same day.

“Designer Kim Ri-eul has been working through sponsorships ever since he created hanbok suits five years ago. As this was the first attempt to sell his work, he felt immense pressure of only the commercial aspect being seen,” Myart Auction said.

“Also, he feared the commercial activity could damage the worldwide status of the artist who wore it. As such, after reconsidering the matter, we decided to remove the item from auction.”

In response to the cancellation, Jimin‘s fans released a statement on Friday, requesting that the hanbok be sold as planned.

“The BTS Jimin gallery expresses deep regret at the cancellation of Jimin’s hanbok auction that was organized by Myart Auction and made by Kim Ri-eul,” the statement read.

“The auction of BTS Jimin’s hanbok can show that hanbok is one of the iconic representatives of Korean culture and can be an opportunity to tell the world of Korean culture. As such, we ask that designer Kim Ri-eul and Myart Auction officials reconsider.”

The starting price of Jimin’s outfit was set at 5 million won ($4,460). Myart Auction made it clear a week earlier that the outfit had not been washed after it was worn and even the makeup stains could be seen.

Outfits worn by BTS in their “Dynamite” music video were sold at $162,500 to a Japanese collector and YouTuber earlier this year. Autographed microphones used during BTS’ “Love Yourself” tour sold for $83,200.