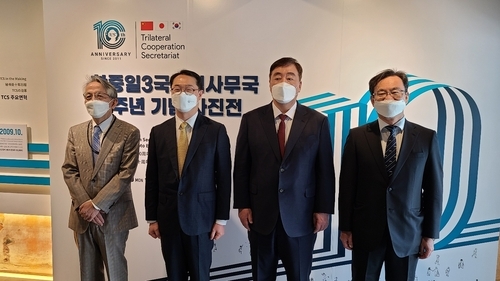 South Korea has expressed concerns about potential health risks over Japan's plan to release over 1.2 million tons of Fukushima's contaminated water into the Pacific Ocean and said it wants to take part in safety verification efforts by the International Atomic Energy Agency (IAEA).

On Monday, Aiboshi said South Korea's participation would be possible.

"We think so," the ambassador said when asked by reporters whether South Korean experts would be able to take part in the monitoring team. "But that is a matter to be consulted on between the IAEA and the South Korean government."

The envoy spoke after attending the opening ceremony of a photo exhibition marking the 10th anniversary of the Seoul-based Trilateral Cooperation Secretariat aimed at enhancing cooperation between South Korea, China and Japan.

Aiboshi said Japan will make "various" efforts to provide Seoul with information about the discharge.

"We have provided information in advance as much as we possibly could," Aiboshi said. "If that is not sufficient, and I believe there are people who think so, we will make various efforts," he said.

Japan will work to ensure safety in the disposal process, he said.

"It is also an issue concerning the Japanese people and the health of neighboring people. The IAEA will dispatch a team and they will properly monitor it," he said.

Kim expressed hope that the exhibition, running through next Wednesday, will "serve as an occasion whereby the trilateral cooperation could further strengthen" as many shared challenges, such as the coronavirus pandemic, climate change and the fourth industrial revolution, lie ahead.

The TCS office was set up in 2011 at then-South Korean President Lee Myung-bak's proposal to improve relations and bolster exchanges.