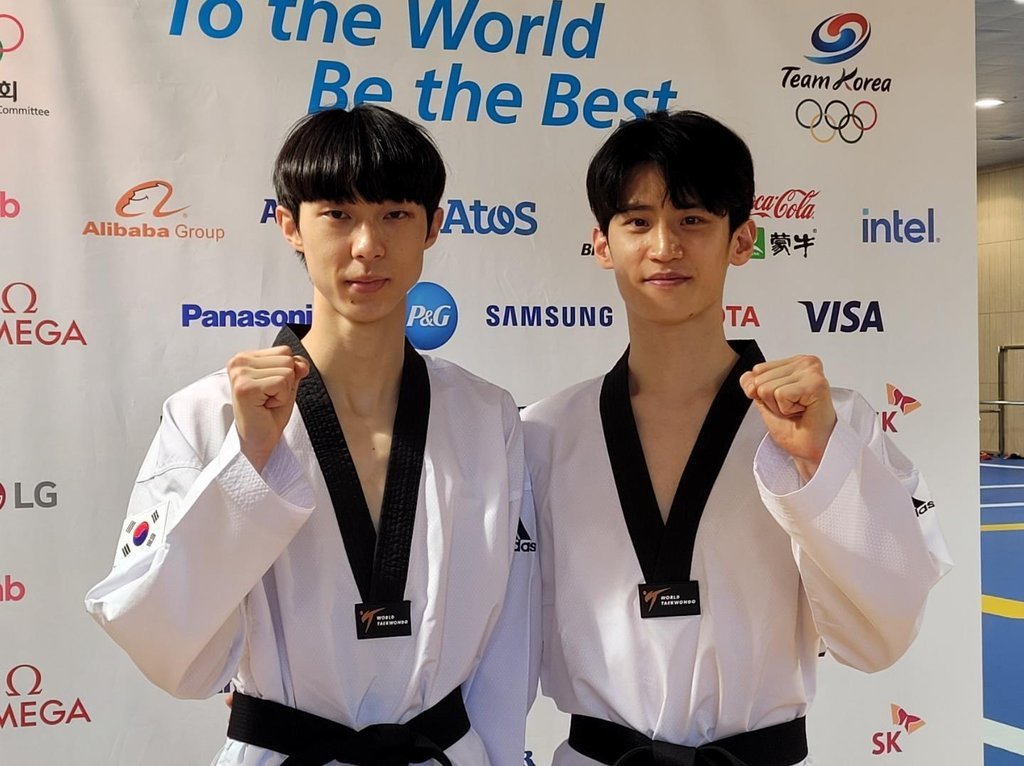 South Korean taekwondo practitioners Jang Jun (L) and Lee Dae-hoon pose for photos during an open practice session at the Jincheon National Training Center in Jincheon, 90 kilometers south of Seoul, on Wednesday. (Yonhap)
JINCHEON -- Given that South Korea is the birthplace of taekwondo, it'd be easy to assume the country would simply bulldoze the competition at the Olympic Games.

South Korea does lead the all-time taekwondo medal table with 12 gold medals, but the country has been far from dominant in recent years. At the 2016 Rio de Janeiro Olympics, South Korea grabbed two out of eight gold medals, with five other countries also claiming at least a gold.

South Korea understands parity in international taekwondo is a good thing, but at the upcoming Tokyo Olympics, the country can throw down the gauntlet early and show who's boss -- on July 24, the second day of the Olympics, in fact.

That's when the men's 58kg event will be contested, and the rising South Korean star Jang Jun is the gold medal favorite there.

"I am nervous about competing at such a big event for the first time, but I'd like to post a good result," Jang told reporters during an open practice for media at the Jincheon National Training Center in Jincheon, 90 kilometers south of Seoul, on Wednesday. "I heard I could win the first medal for our delegation, and I'd love to do it. I always have confidence."

The truth is, however, Jang has been on some big stages. Most notably, he won the 2019 world championship in his weight class in Manchester, England. Later that same year, he was named the Athlete of the Year by the World Taekwondo (WT), the martial art's international governing body. Jang has also won a handful of medals at WT Grand Prix events in 2018 and 2019.

Jang was in excellent form entering 2020, but with the coronavirus pandemic forcing a one-year postponement of the Tokyo Games, Jang was robbed of a chance to chase his first Olympic gold at the top of his game.

"When the Olympics got postponed, I thought at first I would benefit from having more time to prepare," Jang said. "But as time went on, I started thinking maybe it would have been better to have the Olympics last year. I'm not as sharp as I'd like to be because I haven't been competing much lately. I am trying to get that feeling back now."

If Jang is unable to bring home gold, then Lee Dae-hoon, possibly the greatest taekwondo practitioner never to have won an Olympic gold, will take his shot in the men's 68kg class.

Lee is a three-time world champion with 11 Grand Prix titles. But he has come up short at his first two Olympic appearances -- taking silver in the 58kg division in 2012 and then bronze in the 68kg class four years later.

Now 29, Lee may be entering his last Olympics.

"At the past two Olympics, I concentrated more on showcasing the merits of taekwondo and less on winning gold medals for myself," Lee said. "I wasn't as level-headed as I had been in other competitions. That's one of the reasons why I didn't get the gold."

Lee said he has altered his training regimen over the years. He has devoted more time to strength training, which has come at the expense of some flexibility.

"Rather than getting too aggressive, I'll have to figure out my opponents and rely on my savvy to manage each bout," Lee said. (Yonhap)