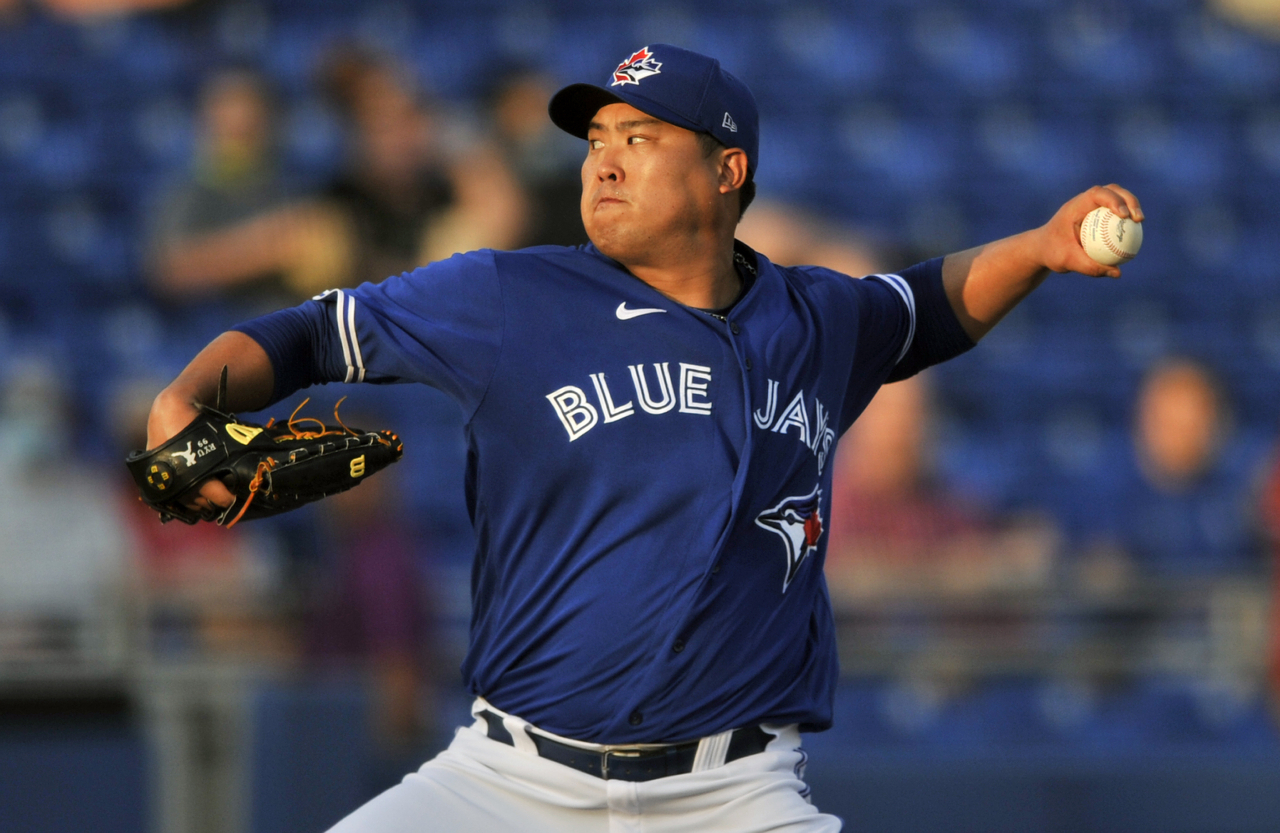 In this Canadian Press photo via Associated Press, Ryu Hyun-jin of the Toronto Blue Jays pitches against the Philadelphia Phillies in the top of the first inning of a major league spring training game at TD Ballpark in Dunedin, Florida, last Friday, 2021. (Yonhap)
As he prepares to make his third straight Opening Day start this week, Toronto Blue Jays' left-hander Ryu Hyun-jin has adopted big picture thinking.

The South Korean ace will be on the mound at Yankee Stadium to face the New York Yankees -- at 1:05 p.m. Thursday (local time), or 2:05 a.m. Friday in Seoul. He also started the first day of last season for the Blue Jays and had the honor for the Los Angeles Dodgers in 2019.

While Opening Day assignments for starting pitchers carry certain symbolic value, Ryu said his focus is on the entire season, not just that one game.

"It's more important for me to pitch well throughout the season," Ryu said in a Zoom press conference, held Thursday morning in Korean time. "I am focusing more on the season than on Opening Day. I really don't have any special feelings about this game. The Yankees are just one of the teams we'll be facing a lot because we're in the same league."

Ryu admitted he may have butterflies in his stomach once he takes the mound in the Bronx, though Ryu added that's not necessarily a bad thing because nerves will keep him on his toes and help him stay focused.

Asked to comment on his opposing starter, Gerrit Cole, Ryu smiled and quipped, "He throws a lot harder than I do."

Ryu said there is much to look forward to in 2021, especially after the Blue Jays added key pieces to an emerging core of position players. Their biggest offseason splash came in the form of outfielder George Springer, the 2017 World Series MVP with the Houston Astros who signed a six-year, US$150 million deal with the Blue Jays.

"We're all excited about this season," Ryu said. "We've been preparing ourselves to play in October (during the postseason). I think our young guys have reached a point where they can compete at the highest level. We know we're going to be competitive against anybody out there."

Ryu said he has also developed a strong rapport with catcher Danny Jansen as they enter Year 2 of their partnership.

"We know which pitch I should throw in what situations, without even talking to each other," Ryu said. "I feel very comfortable pitching to him." (Yonhap)